From the moment we arrived in Albania, people have been telling us that we must stay in Tirana for New Years. Albanians and Americans alike told us that if we stayed here, we would witness celebrations like we have never seen.  And after last night, I can say that New Years in Tirana is like nothing I have ever experienced.

We had been told to expect fireworks and told that our street would resemble the wild west as the midnight hour neared.  Now Albanians seem to love their fireworks.  When a local fireworks storage facility caught fire last month, Albanians were horrified not by the fire, but by the thought of losing all of those fireworks. During the summer wedding season, brief firework displays are a nightly occurrence.   Knowing this, we anticipated a few more flashes of light in the sky but that was about it.

The days leading up to the end of the year were ordinary enough; the usual crazy traffic, pushing crowds in the grocery store, and sense of post-Christmas let down.  I had been told that New Years is to Albanians as Thanksgiving is to Americans. This accounted for the herds of turkeys being peddled on the sides of the roads.  I was just thinking of the holiday as an opportunity for another four day weekend (at the Embassy we get two days off for the holiday- American New Years and Albanian New Years).

New Years Eve morning was cold and clear. With schools being out for the winter break, the neighborhood kids were out on the street early using our gate as a springboard for their basketball.  An occasional firecracker exploded in the neighborhood but even that wasn't unusual.  As the afternoon wore on the number of exploding firecrackers increased but it was by no means crazy outside.

Around 2200 the neighborhood kids started a bonfire in the road.  I knew we had been in Albania too long because I found this amusing rather than alarming.  The number of exploding firecrackers increased and a few kids went as far as throwing them over the wall into the Turkish Embassy compound next door.  The local guard force chased them off into the dark and again the street returned to a relative calm. 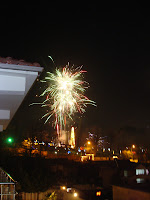 As the midnight hour approached I struggled to stay awake but I figured since I had lasted this long - for the first time in many years- I might as well stay awake for the remaining 15 minutes.

At the strike of midnight it seemed as if the entire city exploded in a burst of fireworks.  Unlike in the United States, Tirana doesn't have an official, government sponsored fireworks display. Fireworks are legal and it seemed as though every resident had their own personal stash.

For well over an hour the sky was illuminated with exploding fireworks.  We had a spectacular view from our third floor balcony. All of our neighbors were in the street, or on their roofs, shooting off fireworks, bottle rockets, and for the smallest of neighbors, sparklers. A few came precariously close to us, landing in our yard.  I saw this happening all over the City and but realized that in a land of concrete houses with clay roofs, the chances of a fire starting were pretty slim.

Glenn and I couldn't believe what we were seeing.  As Sidney slept inside, unaware of the exploding world around us,  we watched as the light display continued on and on.  The air was heavy with the smell of gun powder.  Everyone was right; we were witnessing a display unlike anything we had ever imagined.  Back in Norfolk, the mere sound of a firecracker had the cops investigating. (We remembered one Fourth of July when Glenn and his friend Chris shot off a few small fireworks in our yard. Within minutes the police were swarming our street searching for the source of the explosion).  But we aren't in Norfolk anymore. We're in the land of unregulated pleasures where anything goes.

In the dawn of the new year, the smell of gun powder still lingers in the air.  An occasional firecracker continues to explode in the neighborhood, but then again, that is the norm.  Like most of our experiences here in Tirana, words and pictures just cannot do them justice.  New Years had been described to us and we didn't believe it until we too had experienced it.

Now 2012 is here and it literally started with a bang.  My one hope is that the rest of the year is quieter and less exciting than the first few minutes were.  Here's to a happy new year!
Posted by Zosia at 17:00