The Power of Female Friendship

Friends.  They are the life blood that keeps us going.  Humans are innately social creatures and from an early age we seek out others for companionship.  I am fortunate to have wonderful variety of friends.  They have been with me through the various stages of my life and continue to be a source of support, friendship, and inspiration. Thanks to Facebook and other social media, I have the ability to easily keep in touch with friends I have met as far back as elementary school and all the way up to my current Albanian life. 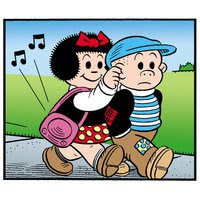 Having a younger brother and no close cousins or neighbors of a similar age, my earliest friend was an imaginary one.  Nancy was a mainstay in our house- she accompanied me to dinner, shared my toys, and even took the fall when I did something wrong.  (Yes mom, the pennies inserted into the television slots during a game of "laundromat" were Nancy's influence).  Nancy and I loved the Nancy comic strip and at one point I unsuccessfully petitioned my parents to change my name to Nancy.  Nancy and I finally parted ways when I entered first grade but even to this day I still think of her.


Michelle was my best from from elementary school.  I met her when I moved to a new school in the middle of fourth grade.  Being the new kid is always hard but she made it easy.  We were immediately inseparable, spending after school hours and weekends together.  Following my father's untimely death when I was in fifth grade, she was the one constant in my preteen world and helped me get through that dark period.  We drifted apart in junior high but recently "re-friended" each other on Facebook.

In high school my best friend was Shelli.  To this day, she is my oldest friend that I keep in touch with on a regular basis.  Shelli is like a sister to me and throughout high school was included in all of our family events.  We shared the angst of teenage crushes, endured the hurry-up-and-wait of college acceptances, and moved into adulthood together.  Although we attended different colleges, we saw each other as regularly as our schedules permitted (this was pre-Facebook!), and as adults settled within an hours drive of each other.  We shared adult heartbreak and joys and years later ended up giving birth to our sons within months of each other.

College found me at an all women's school, surrounded by strong women of varied ideologies, experiences, and aspirations.  During my first year, by the luck of the draw, I shared a dorm with the women who would become my closest friends in adulthood.  Alison, Pam, and Andrea, three women who are as different as night and day, quickly became friends who played, and continue to play important roles in my life.  They supported me though college life then the transition into those first tumultuous post-college years where bad relationships, bad jobs, and bad apartments were the norm.  When I finally met the right person, Pam and Andrea were at my side when I walked down the aisle- only after scrutinizing Glenn before giving their approval.

Marrying into the Navy brought about a whole new set of challenges.  With each change in Glenn's assignment came a new set of acquaintances.  Gone were the days of choosing who I socialized with based on my interests; rather I was introduced to a whole new set of women through spouses clubs (or knives clubs as they are unaffectionately called).  On this front I once again lucked out.  Glenn's assignment to and subsequent deployment aboard the USS Theodore Roosevelt allowed me to meet Victoria and Johanna.  We got to know each other over drinks and dinners during the endless months of workups and deployments.  When Sidney was born early (and out of state) they rallied around me by providing support from afar.  When we were back home they provided us with hospital visits, home cooked meals, and the support a first-time mother needs. Victoria's wisdom on doing battle with Tricare helped me get through those first scary months.

The move to Albania was a tough one; new language, new culture, and a whole new world.  It was a struggle to settle in and I am still struggling to find my own niche in this new life we have temporarily made for ourselves.  I've met a lot of people since we arrived last year and with each new acquaintance I wonder whether they will be the one who becomes that true and lasting friend.  Happily I have found that special friend.  Marcelle is my friend, partner in crime, and shoulder to learn on here in Tirana.  We spend hours talking over lunch and provide support to each other at the monotonous receptions we both must endure.  I am sure this is a friendship that will endure long after we have returned to our respective home countries.

As is the case with life in general and Navy life in particular, we all move on but for me, the one constant is my friends.  I know that all I have to do is pick up the phone or click that mouse and my friends will be there for me.  I am constantly reminded of this when I have the opportunity to get together with girlfriends. No matter how long it has been since we last got together it seems as though we pick up right where we left off.  Its amazing and it gives me the strength I need. I only hope I provide the same support in return.
Posted by Zosia at 17:32