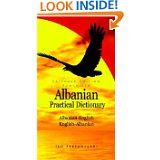 I recently returned to class to improve my ability to speak Albanian.  My goal is to speak better than my three year old.  You would think that after sixteen months of "language immersion" my grasp of the Albanian language would have improved. Not so for me; if anything my ability to speak this difficult language has only gotten worse since we arrived here.  So how has this happened?

Prior to moving to Albania I had the opportunity to spend a total of nine months learning Albanian.  Always the eager student, I was excited to learn that not only was the U.S. Navy going to pay for my language lessons but I would have my own tutor with one-on-one lessons geared towards the vocabulary that I wanted to learn.  Although it was  discouraged by our program, I did have the option of attending class with Glenn.  I opted not to since we are very different students and I really didn't want, or need, to learn the same words and conversational topics that he was required to become proficient in. (Besides, coming off of an eight month deployment that followed a year of ship workups would have just been too much together time for this couple).  Even trying to practice speaking with Glenn at home was painful; he couldn't understand a word I was saying, I would become horribly frustrated and feel like a failure and the pained looks on both of our faces was doing nothing to improve our marriage.

I thought I was prepared for what lay ahead but my mind was literally swimming in confusion after my first afternoon class at ICA.  Not only is it much harder to go back to school as an adult, but four hours of one-on-one language instruction is intense.  Really intense.  In typical Balkan fashion, the Albanian language is unlike any other.  Indo-European with Greek and Latin influences, I found this foreign language with its own alphabet and grammatical cases that don't even exist in English to be a hurdle I could barely cross.  I kept thinking it would get easier but day after day I stumbled to the Metro mentally exhausted and questioning the journey we had embarked upon.  Somehow, as the weeks turned into months I developed my own routine of going to class, caring for an infant who still relied on middle of the night feedings, trying to put dinner on the table each evening, planning my college reunion, preparing to move our family overseas, and yes, doing a bit of studying.  Sometimes I think it is no wonder that I never became as proficient as I had originally imagined I would.

I went through several instructors before I finally found one I clicked with. When we first met, her English was minimal and my Albanian was even less fluent so our class sessions often resembled Pictionary games.  Thanks to the white board, Google Translate and a lot of patience and even more laughs we powered through.  Slowly I reached the point where I could carry on basic conversations. If it involved talking about family, shopping for groceries, or discussing weekend plans, I felt proficient.  Not fluent, but proficient.  I knew my numbers, days of the week, and I could ask for directions.  Listening to news clips on the Internet still left me lost but I could read and understand most news articles.  I assumed that once I arrived in Albania my language skills would only improve.  At least I hoped they would.

Once in Albania I immediately I found out that many people- especially those in Tirana- spoke English.  Their English might not be great but it was better than my Albanian.  English is the common language spoken within the Attache Corp.  Within this international group, those that don't speak English don't speak Albanian either.  Most of the Albanians we socialized with had spent time in the United States which meant their entire families had stronger grasps of English than I did Albanian.  Everyone working at the Embassy is supposed to speak English so my opportunities to speak the language during the work day were limited.  Shopping at local street markets proved challenging since the Albanian dialects were spoken so quickly I just couldn't comprehend what was being said before the conversation moved on.  And I soon found out, there is a big difference between a 40 Leke (40 cents) loaf of bread and a 4000 Leke ($40.00) loaf.

Surprisingly enough, I've found that I must seek out opportunities to speak this country's mother tongue.  Through daily interactions with people in the community I've mastered the pleasantries of greeting and saying good bye to people.  If I think about it in advance I can carry on a basic conversation but if I get asked follow up questions, the conversation quickly grinds to a stop--or switches to English.  In restaurants I will try to order in Albanian but more often than not my requests are met with looks of confusion and a clarification of my order by fingers pointing at the poorly translated English version of the menu.  At the local market I can carry on basic conversations about the weather, fresh produce, and the like but anything more substantive is lost on me.  Our nanny doesn't speak any English and while I can converse enough to discuss Sidney's needs and daily activities, I must rely on my trusty dictionary---and increasingly Sidney himself---for anything more complex.  I am so proud of the fact that Sidney's grasp of Albanian far exceeds mine.  Of course it is a bit embarrassing to have a three year old translate for me.  If nothing else, this is what has inspired me to go back to Albanian class.

So once a week I now sit down with the Embassy's language instructor for an hour of one-on-one Albanian conversation.  We talk about everything- life, family, work, the weather.  Anything that may come up in daily conversation. We discuss what I did during the weekend to practice the past tense.  We talk about upcoming plans to practice the future tense.  After four hour sessions this one hour flies by.  By being forced to speak and think in Albanian I'm realizing that I do know, and remember, more than I give myself credit for.  Maybe something from all of those hours back in Rosslyn has stayed with me after all.  I also realize that I just need to practice.  At a minimum I'm doing this once a week but in reality I need to do this every day.  So watch out Tirana, I'll be speaking more Albanian now.  Please excuse my poorly spoken Albanian.
Posted by Zosia at 07:43