First just let me say that I loved Bucharest.  Maybe it is because prior to our arrival I didn't have any expectations for this Eastern European capitol city.  We included it on our swing through the Balkans since it just seemed to make sense because we were already in the general area and it is a place that most of our friends haven't been.  Visiting it added to the quirkiness of our summer road trip.  In hindsight, I am so glad we did since Bucharest, while still up and coming, is a pretty amazing city.  In fact, we are looking forward to repeating our Balkan road trip in a few years (but more about that in a future post).

I didn't know much about Bucharest, or Romania for that fact, prior to our trip.  Our house here in Tirana is next door to the Romanian Embassy so I recognized their flag.  I knew that even though they are a part of the European Union, they don't use the Euro as their form of currency.  Romanian friends of ours had told us how wonderful the city was and assured us that we would enjoy our visit.  Growing up, Romania was just another Communist Bloc country.  As an American, you might read about it but you certainly didn't visit.  I vaguely remembered hearing about Romania during the overthrow of the Communist regime during the bloody Romanian Revolution in 1989.  The ouster and subsequent execution of Nicolae Ceauseascu and his wife Elena signified the end of 42 years of Communist rule.  During Ceauseascu's rule, many of the city's historic buildings were razed and replaced with "Socialist realism" style buildings (a.k.a. plain, concrete buildings lacking adornment or much architectural interest).  Prior to Communism, Bucharest was at various times bombed by Allied forces during World War II and occupied by German forces during World War I.  Building and population booms were the hallmark of the late 19th Century with gas lighting, horse drawn trams, and extravagant architecture being introduced.  During this period Bucharest came to be known as a "little Paris".  Historically the Eastern Orthodox Church has had a strong influence over the life of the city.  All of these influences are readily apparent in today's Bucharest.

Bucharest today is a city on a continual rebound.  I could feel both the past and the present while walking through the city's streets.  Our hotel overlooked Piata University and the site of the original 1989 uprising in Bucharest.  (During the protests and subsequent shootings, international journalists had a bird's eye view of the proceedings from the hotel's balconies).  A black cross commemorates the first
student who died that December but signs of hope and renewal also abound.  Giant sculptures adorn the grounds of the nearby National Theater.  Renovations and restorations, from both public and private investments seemed to be occurring on every street.  We saw ancient ruins being excavated adjacent to new walkways being built (public investments) across the road from abandoned buildings that were obviously once grand adjacent to those in the midst of renovations.  Numerous churches were also being cleaned and restored.  Dedicated cobblestone pedestrian streets zig zag through much of the city providing for opportunities for fountains, outdoor cafes, and leisurely strolls without the fear of being run over by a speeding vehicle.  Add in the green parks, complete with lakes, playgrounds, and benches for sitting and Bucharest was just a fun city to explore.

And then there were the churches; they were literally everywhere.  I lost track of the number of times we rounded a corner only to come across a small church tucked away between modern buildings.  During the Communist period, when Romania was officially an "atheist state", Ceauseascu's regime used the Church to promote a national identity while the church in turn ignored the existence of hundreds of thousands of Romanian prisoners and focused their efforts on supporting the regime's "social justice" goals.  It is perhaps due to this odd relationship that so many of churches and religious icons still exist today.  And based on the number of black clad priests we saw strolling through the streets, religion still plays an important roles in the lives of ordinary Romanians.  This was also apparent upon entering into any of the numerous churches we visited.  Although small and dark (compared to the grand cathedrals of Western Europe), they were filled with locals praying and seeking solace within the church's hallow walls.  Whereas many churches in Western Europe have felt more like tourist attractions to me, the churches in Bucharest felt like true places of worship.  As a tourist, I felt like an interloper.

Bucharest felt international but decidedly un-touristy.  We saw-and heard- people from all over the world on the streets, visiting the churches, and dining in restaurants, yet never had to stand in a line to wait to visit any of the city's landmarks.  (This was a welcome relief after visiting the likes of Rome and Paris).  Even though we were there in the middle of the summer, the city felt alive and full of energy.  Families, couples, and students filled the streets, cafes, and parks.  Their presence made the city feel decidedly fun.

As I said from the onset. Bucharest is a work in progress.  Our Romanian friends complained that the pace of renovations and work is too slow and they would like to see more progress, sooner.  I completely understand this but given the lack of development and progress I've witnessed in other cities, I am impressed by what I saw in Bucharest.  I can only imagine what the city will look like in five or ten years.  This is why we want to go back then to see all of the changes. 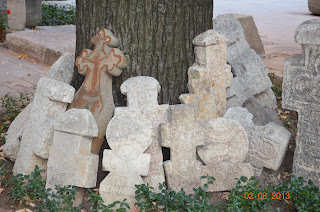