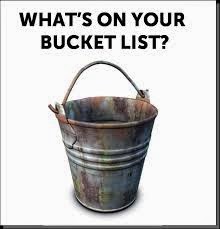 Life is short. And as you grow older, time just flies by faster and faster; it really does. I remember hearing this when I was growing up during a time in my life when it felt like time dragged. But somewhere along the line, perhaps after I had completed my angst filled teenage years, the rate at which time moved started picking up until suddenly it was really flying by. Somehow my twenties flew by, as did my thirties and I now find myself wondering how I will ever be able to accomplish everything I want to do and see everything I want to see.......for me travel is a top priority and with such a big wide world filled with amazing places, how does one even go about prioritizing where they want to go?

Before we moved to Albania more than one person told us to create a bucket list of everything we wanted to see and do during our two years overseas. We were warned to do it right away rather than waiting until we were in our twilight months in order to be sure we didn't run out of time. This was the best piece of advice I've ever been given and is the single thing I advise anyone who asks about how to make the most of their time in any one location. While it may feel as though you will be in a location for ever, you won't. And if you don't make a list and plan, so many wonderful opportunities will simply float away.

After consulting a map of Europe and a long range calendar, Glenn and I dutifully made our list within the first few months we were in Albania. The list was extensive, including both sites within the country and throughout Europe. Some places were those we had never heard of or had never dreamed visiting of while others were places we had always been curious about but never thought we'd have the chance to visit. We took our list one step further and plotted out when we would like to visit--next month, next year, or even in two years--these dates were all penciled in onto our multi page chart. Two years felt like a long time but once we started consulting a calendar we realized our time would be gone before we knew it. When we extended our tour by six months we added a few more places to visit. Pop up work related travel had us rearranging our schedules. When we found out that we would be staying in Europe for a second, three year tour we adjusted our list yet again, removing countries that would be in close proximity to where we would be living and adding those that we would probably never have the chance to visit again. While we never got to every place we had hoped--Sicily and Morocco kept getting bumped-- we traveled to places that we had never dreamed of. Who knew that Bulgaria and Romania were such beautiful places or that the coast of Montenegro could give the Italian and Croatian Rivieras a run for their money in terms of sheer beauty? In the end we managed to visit twenty-three countries over the course of thirty-one months with several countries seeing repeat visits. Now that is pretty impressive if I must say so myself.

So following our own advice, the other night Glenn and I sat down once again to plan out our travel bucket list for the next three years. And of course putting the list together was another fun opportunity to dream. Our new list includes local day trips, long weekend excursions and three much larger, multi-country excursions involving trains, planes, automobiles and boats. Some of the list is quite predictable while other cities and countries are a bit more obscure. I'm sure places will get added as time goes along while others will get bumped because we will simply run out of time. And because we've been on the go since we arrived in Belgium, we are already ticking spots off of the list. Yes, Sicily (fall 2014) and Morocco (April 2015) are back on the list and this time we will really get there. We've added some Baltic countries to our itinerary and old favorites such as Italy that are places that just worth visiting over and over. The list is ambitious but we ask ourselves when we will ever have the opportunity again to explore so much of the world that is literally in our backyard. Our answer is probably never so we are taking full advantage of the opportunity of the here and now. Besides, half of the fun of a bucket list is dreaming about the possibilities and right now ours is just overflowing.