Stress.  As in "I am so stressed". The phrase has become so commonplace in conversations that I sometimes wonder whether it has lost its true meaning. Or whether it has become such a catch phrase that people don't stop and think about what it really means. But recently two separate articles discussing the causes of stress caught my eye and now I find myself thinking at of course we are stressed as a country and a society. I mean, given all that is going on around us, how can we not be?

First, a The Washington Post article cited a Robert Wood Johnson Foundations study that found politicians to be the number one factor in causing stress in our daily lives. Eighty-six percent of surveyed Americans indicated that they had experienced stress in the past month with 26 % saying those stress levels had been extreme. While major health issues were the largest contributor of longer term high levels of stress, issues surrounding everyday life were attributed to smaller daily stressors. Americans said that "hearing about what the government or politicians are doing"increased their stress levels more than dealing with long commutes, juggling the work-life balance and dealing with family dynamics. Hence the negative influence of our elected officials. And with the ongoing stalemate punctuated by vicious verbal attacks and other juvenile behavior in Washington, it really is no wonder. What we are watching looks like bad reality television. But when these issues-- the economy, immigration reform, religious freedoms, access to health care and global warming-- directly impact individual lives yet are treated like pawns in an ugly game, it is all too real. So it is no surprise that as a society we are so stressed. I know I am, are you?

And speaking about hearing and watching the politics play out on televisions, a NPR piece discussed the same study, focusing on the impact watching, reading or listening to the news has on our stress levels. Open a newspaper or turn on the news and it is filled with bad news. Foiled terrorist attacks, domestic disputes turned deadly and the recent horrific spate of parents leaving their young children in hot cars fill the airwaves and these are just the domestic news articles. And when an event is particularly horrifying, the media provides continual coverage of the event. If there is nothing new to report they replay the footage or bring in "experts" who not only speculate on the event at hand but link it to past atrocities. One only as to think about the events surrounding the September 11th terrorist attacks or the bombing of the Oklahoma City federal building to realize how true this year. Years after the event these images are still burned into my mind. But despite, or perhaps because, of the scale of these tragedies, people are watching. The above cited study found that "people who exposed themselves to six or more hours of media daily reported more acute stress symptoms than did people who were directly exposed" to the actual events. So we no longer need to actually experience the event in person in order to suffer the effects of its aftermath. Are we on the verge of becoming a country where everyone suffers from PTSD?

So who is to blame for all of this and what should we do? Do we elect new representatives with the hope that they can actually work together to solve our never ending list of problems? Do we turn everything off and simply unplug from current events? Do we run to our doctors requesting drugs to dull the side effects of our society? Sign up for yoga classes or live on media free communes that are cut off from the world? I have no idea what the solution is but something has to give. And soon.... 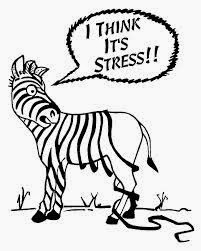