All I Want For Christmas....... Is A Bacon Cheeseburger 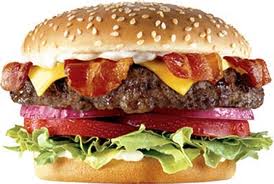 Everyone once in a while a craving strikes me and until it is fulfilled it is all I can think about.  Last week it was a bacon cheeseburger that got me thinking and I just wouldn't be able to turn my thoughts to other things until I ate one.  Now this is a strange thing for me to crave since I've never been a huge fan of hamburgers and I really try not to think about foods I can't easily get here since it just makes my cravings unbearable.  But for better or worse, a bacon cheeseburger it was.

It all started with my checking my email while drinking my first cup of morning coffee.  As has become my habit lately, I check out a couple of the blogs I follow to see if there were any new postings. One of the wonderful things about having a six hour time difference between Albania and the East Coast of the United States is that I can usually wake up to an in box full of new reading material.  On this particular morning From Away a new favorite food blog based in Maine had posted a restaurant review of L & H Burgers, a new gourmet burger restaurant in Rockland, Maine.  This immediately caught my attention since this small Mid-Coast city has gentrified so much since I was growing up in the area.  After reading this blog entry and even though it was still the early pre-dawn hours where it is simply too early to eat a burger,  all I could think about was a good old bacon cheeseburger.

Apparently it is all about what you can't have.  My mind wandered to the last time I ate a real American hamburger.  Since I'm not normally a fan, I didn't eat one when I was back in the United States this past August.  I remember being moderately tempted to have a Five Guys Burger during my layover in Washington but instead opted to try out a wine bar I had always seen but never sampled.  (I didn't regret my panini sandwich and wine tasting one bit).  I think the last time I had a cheeseburger was during a training in Budapest back in May when a group of us decided to go to the Hard Rock Cafe to get a dose of Americana.  As I recall, the burger was good but not great.

So this brings me back to my craving and a moment of foolishness last week.  As we do many work days, Glenn and I had lunch together in the Embassy cafeteria.  Their menu isn't fancy and consists of pretty good Albanian food, decent Italian food, and not so great American food.  I usually stick to soup and salads with the occasional pasta thrown in for variety.  Unaware of my cheeseburger craving, Glenn ordered a bacon cheeseburger with a side of fries.  Before I could really think about what I was doing, and much to the surprise of myself, the waiter and our table mates, I found myself ordering the same thing. I immediately knew I would regret it but I did it anyway.

And as predicted, from the very first bite I rued my choice.  It is hard to explain but any burger in Albania just doesn't compare to one of the a fore mentioned hamburger choices.  The meat is different in both taste and texture and the overly sweet ketchup does nothing to help the sandwich's cause.  No matter how much I closed my eyes and tried to pretend it was something different it just wasn't.  My Albanian bacon cheeseburger was just a poor imitation of the real American ground beef patty I had craved.  I still have my craving by my lesson has been learned (for the moment anyway).  I will stick with soup and salad and not think about all of those wonderful foods that I just can't find here.  At least the side of French fries were passable.
Posted by Zosia at 15:38

Email ThisBlogThis!Share to TwitterShare to FacebookShare to Pinterest
Labels: Albania, cravings, Five Guys Burgers, From Away, L and H Burgers