My neighborhood has a dog problem.  Like most of Tirana's neighborhoods we have our share of stray street dogs who roam the neighborhood picking through trash bags and generally making nuisances of themselves.  During the hot days they seek out the shady areas of the nearby park where they congregate in packs; colder days find them seeking shelter on the streets, or if we aren't careful and leave our gate open, in our yard.  I don't know if they are especially dangerous but when feasible, I go out of my way to avoid them.  At night they seem to come alive running in packs with their barking, yapping, and occasional disruption of traffic flow.  Since we arrived here we've been instilling in Sidney the mantra that you just do not touch the dogs.  This is hard since little boys love dogs - or qeni as they are called in Albanian- and both Glenn and I grew up in households with dogs.  Not all dogs are bad but that concept is too complex for Sidney to comprehend at the moment and so we are better off avoiding all of them.

When we moved into our house over a year ago, it seemed as though few people in our neighborhood actually owned dogs as pets.  Not counting Robert the mangy German Shepard who serves as a "guard" dog--his bark is louder than his bite-- at the abutting Turkish Embassy, the only pet dog in our neighborhood was the once white terrier living across the street.  Most days the little dog has free reign to run the streets and makes regular attempts to escape into our gated yard when the opportunity arises.  He has also taken a special liking to Glenn and will nip at his heels and latch onto his pant legs whenever he can.  (Fortunately this dog shows no interest in either me or Sidney). 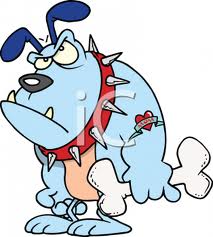 Recently I've noticed a new, not so pleasant phenomenon in our neighborhood; dogs as status symbols.  These are the rough and tough breeds of dogs-- Doberman Pinchers, Rottweilers, and Pitt Bulls-- that have dominated American tough guy culture in recent decades.  I know that these breeds often get an unjust, bad rap but it only takes a few bad examples to spoil the reputation of a breed.  (My brother and sister-in-law had a big Rottweiler who was as sweet as can be and their white Pitt Bull named Pickles is essentially a lap dog who gets dressed up in sweaters to fend off the Maine cold each winter).

So it would appear that tough-guy dogs have arrived in Albania.  These certainly aren't sweater wearing lap dogs although a couple do sport black leather spiked collars.  During the warmer months slouchy young men congregate on our street with their dogs in tow.  Like their owners, the dogs sniff each other out before the braver ones go in for the attack.  These aren't Michael Vick level dog fights but they certainly aren't PETA approved actions.  All of this goes on under the "watchful" eyes of the guards from the neighboring embassies.  On occasion I've said something to the men in my broken Albanian but my words have done nothing to stop the fights.  Now that the days are shorter and the weather has turned cold, the dogs seem to be hunkered down behind the neighborhood's walls.  Out of sight doesn't mean out of mind, however.  All it takes is one dog, who for whatever reason, breaks into a barking fit, and all of the others soon join in.  The barking and yelping echos through the cold, concrete filled darkness and without seeing what is happening it sounds as though the world's largest dog fight is taking place.  The sounds may be scary but the noise has become so frequent that I am noticing them less and less.

Don't get me wrong; dogs make great pets and are valued members of many families.  But as family members they need to be taken care of with the same consideration that is shown to all family members.      Pet shops have been popping up all over Tirana and I've seen quite a few dogs that are obviously pampered (can you say matching owner-pet outfits???) but the ones in my neighborhood don't seem to fall into this category.  And that is sad.  I wish there were laws in Albania governing how animals should be treated but I fear that any such laws are years away.  In the meantime, I wish people would move away from dogs as status symbols.  But alas, dogs are status symbols in many American communities and so it makes sense that this unfortunate trend would also migrate half way around the world.  I guess I need to brush up on my dog related Albanian phrases so I can clearly let the men on my street know that this behavior is not acceptable.
Posted by Zosia at 15:11