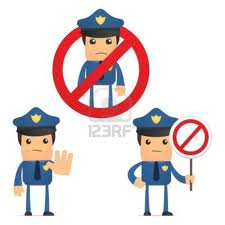 Lolly pop men.  Because of their propensity to stand in the street waving large wooden lolly pop like wands, that is how I think of the police in Albania.  You see them standing at intersections or along roadways balancing a cigarette in one hand and a cell phone on their shoulder while waving their lolly pop wand in a fashion that gives me little indication as to what I should actually be doing.  Frantic side to side motions or rapid up and down ones; I have yet to learn the real intent of their motions and from what I have observed, other drivers are equally as clueless since rarely are police directives obeyed by the ordinary Albanian driver.  I have seen more than one irate officer use their lolly pop to pummel the hood of an offending vehicle but even that action seems to do little to stop the bad behavior.  Put the wand waving officer in the middle of an intersection, or better yet a traffic circle where vehicle flow is supposed to occur naturally, and chaos is sure to ensue. Whenever we approach a bottle necked intersection we joke that there must be a police officer in the middle of the mess and more often than not, we are right.

Albanian police officers seem to collectively lack situational awareness.  They will stand in the middle of an intersection surrounded by oncoming traffic and seem oblivious to the approaching danger.  And given the way Albanian drivers drive, there is a lot of danger.  Maybe they are distracted by their buzzing cell phones and hand rolled cigarettes.  But at the same time the very same officer will suddenly spring into action and stop the very last vehicle in a long chain of traffic to allow our car to make a left hand turn onto our street. Now this being Albania and Albanian drivers, we only have a fifty percent chance that the oncoming car will actually stop.  The car is just as apt to swerve around the officer and continue on its merry way nearly side swiping our vehicle in the process as it is to stop.  And as I learned during our earlier fender bender experience, each police officer has a very specific job that they must not stray from. If they are assigned to traffic duty to catch speeders, that is the only thing they can enforce.  The officer can neither investigate an accident that might happen right in front of them (or perhaps because of them) nor can they stop a driver who is clearly violating the law--unless it is for speeding. The police officer will merely shrug their shoulders at the offense and return to monitoring the road for speeding drivers.

When you do hear people talk about the police here it is rarely in a positive light. I often hear of police eliciting bribes from unsuspecting drivers (and have witnessed this first hand) or as is probably common throughout former Communist countries, that the police are merely agents of the state.  Perhaps this is why they don't receive the respect they deserve.  Because of the proximity of our house to two embassies and two ambassador residences, both day and night our neighborhood is flooded with police whose job it is to protect these foreign entities and dignitaries.  These mostly elderly officers (and for some reason it seems as though most police officers in Albania are old) spend the day strolling the street and loitering in groups as they smoke and talk and yes, guard their posts.  Their physical stature alone makes me question their abilities to deter crime and I have little faith that a foot pursuit would result in anything more than a heart attack.  However, they are probably the kindest group of Albanians we have ever encountered.  They smile and wave as we drive by each morning, greet us upon our return, and on more than one occasion have caught Sidney as he flees out of our yard.  They smile and chat with Sidney in Albanian as he peddles his tricycle by them.  Their presence does deter the young boys on our street from causing too much trouble and they make sure that speeding traffic slows when Sidney is outside playing.  (Maybe Albanian police are cross trained after all.........................................).

But in all seriousness, I can only imagine how under appreciated an Albanian police officer must feel in a country where authority is neither respected or revered.  The sight of the uniform, however haphazard it may be, or a police car that may or may not have strobe lights (or gas), does little to draw the attention of the people on the street.  I was raised to get out of the way of flashing lights and blaring sirens.  Here, drivers either ignore the alarms or use them as an opportunity to squeeze into the empty space that was created by the handful of foreign drivers who were trying to make way for the approaching emergency vehicles. Policing in Albania is also an especially dangerous profession.  Since we have been in Albania I have heard of the shooting and killing of several officers in the line of duty.  I'm not sure the embarrassingly low salaries and lack of respect make what should be a coveted and respected job worth the danger and aggravation.  But in the end, what becomes of a society where law and order are ignored?
Posted by Zosia at 17:43