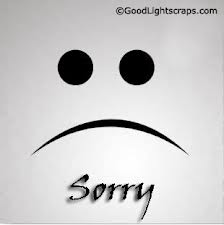 "I'm sorry."  From the stranger who bumps into you on the street and the waiter who informs you that they are out of the dish you ordered to your three year old apologizing for doing something wrong or a co-worker explaining why they didn't do their share of the joint project, the words can literally be heard everywhere we turn.  So often I hear those two little words and wonder about their true meaning.  They seem to be thrown around in such a cavalier manner that I question whether the person speaking them even realizes what they are saying.  So why do we apologize so readily and more importantly, if the words are so casually thrown around, do they really have any meaning at all?

At home Sidney is quick to spit out the words whenever he thinks he has done something wrong.  Usually they are used in the correct context.  Often they come immediately on the heels of an action that he knows he shouldn't have done.  While we have taught Sidney that he needs to apologize to people when he does something wrong---recently this has involved both spitting and hitting, two horribly rude actions that I am hoping are only a fleeting phase--- I am wondering if we went about teaching the apology lesson all wrong. After all as the words are saucily thrown out along with his sly little smile, I doubt there is much sincerity in their meaning.  When Sidney's words sound insincere, we are quick to discuss that while the apology is appreciated, what he did was wrong, we explain why it was wrong and why the behavior must not be repeated.  Some days I think we are making progress but then Sidney repeats the action echoed by a sassy apology and we are back at square one.  How do we break this cycle?

But toddlers aren't the only ones guilty of insincere apologies.  I hear apologies on a regular basis both at work and in social situations.  All too often apologies are offered in contexts that really aren't necessary.  It has never killed anyone to wait an extra minute or two for their coffee at a cafe so when the barista apologizes for the delay, while appreciated it really isn't necessary.  The same goes for people simply doing their jobs.  The guards at a facility that requires everyone to walk through a metal detector before entering shouldn't be apologizing for simply doing their jobs.  Now when people don't do their jobs, that is another story.  An apology might be appropriate for missing a deadline, failing to follow the clearly stated rules, or being late for a meeting, but if the words don't sound sincere, why say them at all? If you aren't sorry, then don't say it.  Recently I was asked what someone could do to make up for doing something did wrong they claimed they were sorry for.  My response was that if they were truly sorry, the best way to prove it is to not repeat the behavior.  Simple enough. Right?

I understand the temptation to say I'm sorry.  In many uncomfortable situations where silence fills the atmosphere, those two words may seem like an easy panacea at the moment but if the words aren't sincere, why are they said in the first place.  When I hear it in these situations, much like those with a toddler, I wonder whether the apologizer is sorry for their actions or simply sorry they got caught.  There is a difference.  I know many people will disagree, but while I will apologize if I truly mean it, I won't say I'm sorry if I'm not feeling it.  If I feel strongly about something, apologizing for feeling that way won't change my feelings.  Perhaps it will make you momentarily feel better but it won't resolve anything in the long term.  So if I tell you I'm sorry, I really mean it.
Posted by Zosia at 09:00