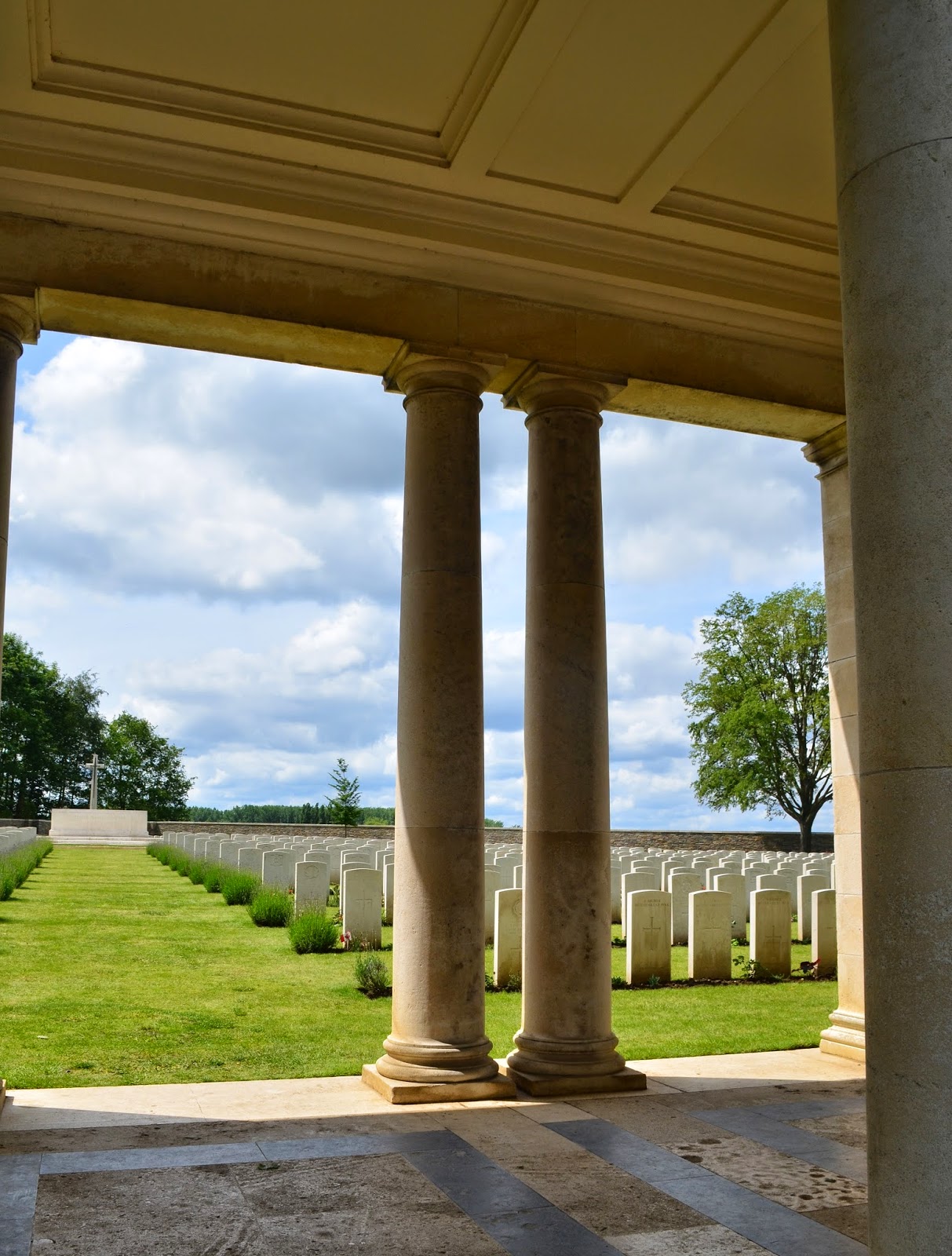 There are some questions that parents inevitably know they will be asked by their children at some point. Whether it be where babies come from, why some people are mean, or what happens when you die, they are all difficult questions to answer. And the explanations are even more difficult when you yourself aren't sure what you believe and whatever your answers are, they must be age appropriate for their audience. Our recent Memorial Day visit to World War I battlefields and cemeteries raised one of these very questions for us and it has me thinking.

Sidney has recently become enamored with the fact that his father is in the military. He talks a lot about uniforms, ceremonies, and the other more glamorous pomp and circumstance events that go along with the career. He even understands guns and the fact soldiers use them to, in his words, "fight the bad guys". He talks about bombs (I have no idea where he learned about this) and how they are bad. And now a part of his morning routine before dropping Glenn off at work has become telling Glenn not to throw bombs at the good guys. (Although he is now telling Glenn not to thrown computers at them since I've repeatedly told Sidney that his father does not thrown bombs at anyone at work). This is an all too innocent four year old's understanding of soldiers and war and for the moment I am actually quite happy with leaving it at that.

We don't believe in sheltering our son from reality or the truth; rather we want him to understand, in an age appropriate way, the good and the bad of history and the world around us. And, most importantly, we want him to hear these things from us rather than hearing it from others. As such, we don't hesitate about visiting Europe's numerous battlefields and war memorials. When we visited Bastogne Sidney asked questions about soldiers getting hurt. We told him that doctors made them better when they were injured and at the moment he accepted this explanation. In the weeks following our visit he would talk about tanks and bad guys getting hurt but doctors fixing them. But then this past weekend we visited Ypres and several military cemeteries and the questions have started anew.

As we walked through the muddy trenches of Sanctuary Wood, we explained to Sidney how soldiers, in this case Canadian, had hidden in the trenches and used them as a protective cover from the German forces. (Unfortunately) Because of his playground games he understands that soldiers often shoot at the enemy from hiding so he seemed to understand the purpose of the trenches. It was a simple explanation and we tried to focus on what the trenches were like at the moment rather than the brutal reality of what occurred in them. But after our visit to two military cemeteries, with row upon row of marble grave markers, the question of death arose. Actually, in a somewhat preemptive move, we brought it up.

We have been lucky in the fact that, to Sidney's knowledge, we have lost neither family, friends nor even pets to death. But in his playground games Sidney has talked about shooting and killing the bad guys and has even come home from school on one occasion in tears because a rather mean classmate (a "bad guy") told him that his parents were dead and not coming back. So we think it is important for Sidney to not only understand that being dead isn't something one should joke about but that people do die. And that when we visit cemeteries and tell him that he must be quiet and respectful, that each of those white headstones marks a dead soldier whose memory we are honoring. But where to begin?

We started by talking about the trenches and how the soldiers in them were fighting off the bad guys so the rest of us could live our lives and have the freedoms we enjoy. We tried to put it into terms he understood, that the soldiers fought so people like Sidney could have choices in life, could go to school and could even have the friends he does. He seemed to get that and quickly nodded in agreement. But then we went on to say that sometime the good guys got hurt. At this point Sidney interjected and stated with conviction that when they got hurt the doctors would come, take them to the hospital and fix them up. We partially agreed but carefully said that sometimes the doctors just couldn't fix what was broken. Taking a deep breath I continued that when they couldn't be fixed they died and were buried in the cemetery much like the we visited. Sidney nodded, much slower this time, and asked what happened then. We explained that they were buried in the ground under the white stones and that their parents, children and friends could come and visit them. With wide eyes Sidney nodded again then went off to play. It may have been the end of the conversation for the moment but I know it isn't the last of it.

So did we just open a big Pandora's box? I know my little boy will mull over what we told him and will come back with more questions but now I am not sure we are ready for them. How do we explain death to a four year old in a non-scary way? I honestly don't know if I believe in an after life, do not have the strong religious convictions that so many people take comfort in and as such I refuse to tell my son stories I myself am not sure of. The last thing I want to do is scare him yet I don't want him to hear the wrong information at school and become even more scared.

So parents, and anyone else who has struggled with this, please help me out. How did you explain death and dying to your children? It takes a village to raise a child and right now, I need mine.
Posted by Zosia at 10:00