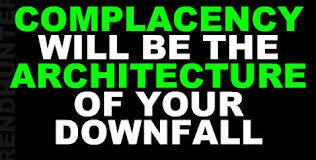 Are we too complacent as a society? I started to wonder this recently while I was listening to a broadcast of Diane Rehm on NPR. Her guests were discussing the controversial issue of the Affordable Care Act, or Obamacare as so many call it, and the words of one of her callers struck a particular chord with me. The woman was from Oklahoma and was talking about how her family was now saving over a thousand dollars a month on their health insurance premiums due to health care reform. She went on to state that if the law was repealed her family would be destitute and she would then lobby her elected officials to have them fight to bring the law back. It made me ask the question of "why wait"? I mean, if something is that important to you why wait until it is gone to let the people in power know how you feel?

I'll be the first to admit that I am often too complacent when it comes to issues that matter to me. Take the health care issue for example. My family, like other military families out there, is very fortunate that we have extremely affordable (i.e. free) health care because of my husband's job. If we need to see a doctor how we would pay for the visit is something that never even crosses my mind. I believe everybody should have access to affordable health care and it saddens me that this isn't the case. But honestly, what have I done about this? Absolutely nothing. I listen to pundits talk, voice my opinions to those closest to me, maybe blog a bit and then leave it at that. Really, I, along with everyone else who is lucky enough to have health insurance should be pounding the pavement and calling our elected representatives demanding that others have the same benefits we enjoy. Whenever there are rumblings about the cost of health care for military families and veterans increasing you can bet that these families are out there writing letters and making phone calls protesting the proposed actions so why aren't we joining forces and doing it to help others? Do we think they aren't deserving? That they can do it for themselves? Or that it isn't our problem?

And I'm as guilty of this in action as the next person. I'm not out there advocating because I ashamed to admit that I am too complacent in my own little world. Like so many other people I tend to act when things personally effect me. That doesn't mean I don't care about others; rather for whatever reason I simply don't care enough to do something about it even though I know I should. I know this is bad.

So I'm challenging myself and everyone else to do something about it. Pick one issue, any issue that is important to you and do something to make a change. Write a letter or make a phone call to an elected official or volunteer for a cause in your community. Step out of your complacent zone and help make a change for the better. It may or may not directly effect you but if it helps someone else it is making all of society better. And that does help you. So just do it now.