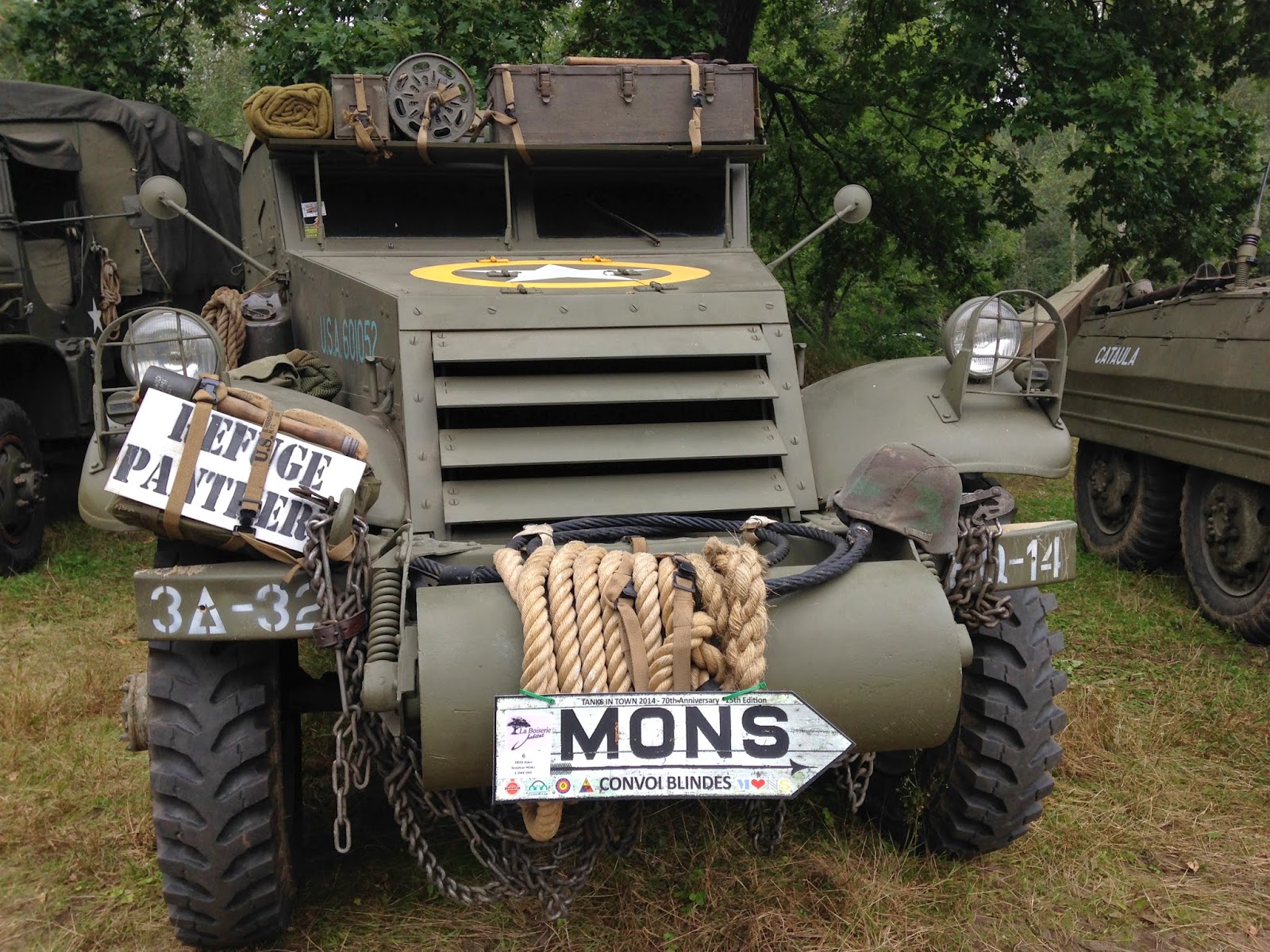 When we lived in Virginia I always wondered about the Civil War reenactors who would flood old battlefields each year. Because we were south of the Mason-Dixon line there seemed to be more Confederates than Yankees but the later were still present. I wondered whether the (mostly) men who played war were history buffs reenacting the stories of their forefathers or simply liked to get dressed up and play war. At the time I naively thought this was some weird American phenonenum. But then I moved to Belgium, the heart of battles in both world wars and realized that Americans have nothing on their European counterparts when it comes to war reenactments.

This past weekend was the annual Tanks In Town event here in Mons. Tanks In Town commemorates the liberation of Mons by American forces during World War II and this reenactment is the ultimate in big boys and their even bigger toys. For three days tanks, jeeps, amphibious vehicles and every other form of World War II artillery descend on the Mons region for one big party celebrating the region's liberation from Nazi control. There are reenactments, camps and parades throughout the region. A huge flea market selling everything from period uniforms and weapons to cheap Chinese produced knock offs runs the length of several city blocks. And the culmination of the events is a Sunday evening procession of all of the military vehicles into the Grand Place in Mons.

Tanks In Town was one of the events we have been hearing about since we arrived here so we made it a point of taking in the festivities. On Saturday we joined the crowds in watching the launch of amphibious vehicles in the canal. It was pretty amazing to see these lumbering vehicles make their way from shore into the water and back. After their initial splash into the water I had to wonder how they could stay afloat. After the amphibious demonstration we made our way to the large encampment that served not only as a stationary exhibitors for visitors to tour but the actually sleeping place for many of the weekend's reenactors. An expansive wooden area had been converted into a World War II era camp for the weekend. Scattered amongst the trees were tank, tents, jeeps and other machinery. Soldiers lounged around campfires, healed the wounded in makeshift hospitals and answered questions from inquisitive guests. And of course there were the tanks; they tore around a muddy track splattering dirt and debris on those who stood to close. Up until this point I had never been this close to a moving tank and was surprised at how their sound echoed through the woods and make the ground shake long after they passed. These certainly weren't vehicles that were used in stealthy maneuvers. Other tanks were stationary with visitors being invite to sit on and explore their formidable features. Then there were the reenactors themselves. Men, women and children, young and old alike were dressed in period costumes. Many visitors had even gotten into the spirit of things by dressing in their own period costumes. And of course because this is Belgium the camp included some no-so-period beer and frites (French fry) trucks.


But my favorite part of the event was the next day. This is when these tanks came rumbling into Mons' cobblestone covered Grand Place, replicating the actions taken by American troops 70 years ago. A bus full of the veterans who helped liberate Mons were present as special guests. We were lucky to snag a front row seat at a cafe and with our bottle of wine (and orange Fanta for the little one) we watched the spectacle that is Tank in Town. We heard the tanks long before we saw them. First came the procession of jeeps, troop carriers and ambulances filled with waving soldiers and their pretty young women. Then came the motorcycles driven by grizzly goggle clad men with their coats flapping behind them and the amphibious vehicles. Finally there were the tanks. They rumbled up the narrow streets and into the square. Because of our great location Sidney was swept over the barrier by a soldier and placed atop a tank for a few minutes.

I know this was a reenactment but it was impossible not to get caught up in the cheering and spirit of the moment. People in the crowd hung out of windows high above the square waving flags and cheering on the liberating troops. Once the tanks filled the square the barriers were lifted and the crowds joined the troops and tanks. The SHAPE band played big band music while people danced, drank and had their pictures taken. The atmosphere was truly festive. I can only imagine what it must have been like to actually be here in Mons during the liberation. But since I wasn't there I'm lucky that I got to experience this reenactment. It is events like this that make living here in Belgium so special.