It Is Finally Official..... 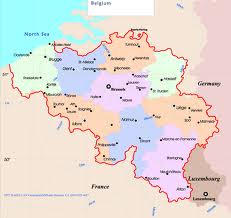 .................or as official as it will be until we are physically there.  After months of waiting we have our next set of written orders in hand.  Come January, the Brown family will be heading to Mons, Belgium for three years.

This is the season for the moving game, or PCSing, a.k.a. permanent change of station, as it is known in military lingo, and it is something military (and foreign service) families are all too familiar with.  You are barely settled in one location before you are putting out feelers for your next set of orders.  A friend of mine once likened the process to on-line dating.  You research what is out there and what is the best fit for you (and your family)then make your wishes known hoping someone likes you back. Sometimes it works out but other times it doesn't.  It can be an opportunity for positive change---if you don't like where you are or don't like your job, you aren't committed to it in the longer term-- but it can also be upsetting and tumultuous for all those involved.  Spouses may have to quit jobs, children may be removed from friends and schools they love, and social networks are often shattered.  When we were in Norfolk we were fortunate that Glenn was able to move from one job to another without our family having to actually pick up and move.  This pattern continued for several job rotations meaning we kept our house, I had continuous employment, and we kept our every growing circle of close friends, but most people aren't so fortunate.  More often than not, every two to three years families are packing up, house hunting, and moving half way across the country or even the world and re-establishing themselves before staring the process all over again.  This is the game we knowingly jumped into when we decided we were ready to move beyond Norfolk.

It wasn't long after we arrived here in Albania that we began asking ourselves what was next.  Sure we would be here for two years (which stretched into two and one half) but it is never too early to start thinking about and exploring what could come next.  Initially we thought another embassy tour might be in order or more likely a return to the States since Sidney would be starting school and I could return to work but the longer we were overseas, the more the "European bug" got us and we decided we wanted to stay here.  Not in Albania per se, but in Europe in general.  At first it looked like Germany was in our future and I dutifully began researching houses, school, and family life there. It all sounded good and I was getting excited.  Then we were told that it would be Belgium, an option we had never even considered but were even happier with yet I hesitated to do too much research before the move was definite.  After all, we had been down this route before and I didn't want to get my hopes up too much lest I be disappointed in the end.

Just to demonstrate how far in advance some of these moves can be planned, the family that was set to replace us had been identified and was asking us questions about the country before we even arrived in Albania.  This advanced planning isn't always the case, however.  In fact, it rarely is.  I know several people who are supposed to PCS this summer who are still awaiting their official orders in writing. I know that in this era of budget cuts, sequestration, and all around cost cutting we are lucky to have orders in hand seven months before our move date.  Verbal orders are fine but until you have that ream of paper in your hot little hands, you can't plan the things that really matter. These orders are really your passport to your next life since you can't house hunt, register your children for their new school, or schedule your move without them.  And we now have them!

As I said earlier, it will all be real once we land in Belgium.  In the meantime, however, I have schools to research, houses to hunt for, and the next three years to plan out.  As difficult as it can be to pick up and move, the possibilities of what the future holds for us are too exciting to resist.  And I can't wait for what is in store for us.
Posted by Zosia at 16:28