The Gardens Of Abbaye de Villers-la-Ville 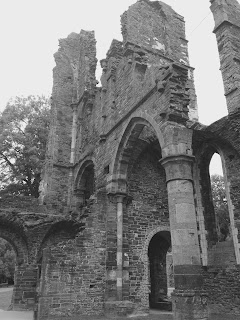 One of the best things about Belgium is its proximity to some of Europe's great cities and sights. Thanks to its central location, in two hours we can be in Paris or London; Brussels or Amsterdam. It really makes for great trips. But despite all of these world renowned locations we can visit, one of my favorite things to do on weekends is to explore the hidden places that are closer to home; these are the sights that locals know about and whirlwind visitors rarely get to see. These off the beaten path places  have yielded what I think are some of Belgium's best treasures. And one such place is the ruins and gardens of the Abbaye de Villers-la-Ville.

Like many Belgian abbeys, this one dates back to the early 10th Century when a small group of monks established an abbey in the secluded village of Villers and its ensuing history is also similar to other abbeys. It expanded in size and population, endured wars, internal crises and reign changes. By the 13th Century the estate covered over twenty-five thousand acres and was indeed one of the largest ones around. (The power once held by the abbey is still evident in wandering the grounds; in addition to the typical spaces and buildings one would expect, the abbey had their own prison). The abbey was "modernized" over time with mediaeval buildings getting transformed into a more classical style. During the French Revolution the abbey was closed and the surrounding property sold. During the following years the abbey fell into ruins with a small amount of restoration work finally beginning in 1893. It wasn't until close to a century later in 1984, however, that large scale restoration work began.


Today visitors can walk through the still expansive grounds visiting the remains of the refectory, church, cloister and chapel as well as the numerous outbuildings that made the abbey a fully functioning city unto itself. The guest house provided space for up to one hundred pilgrims before it was converted into an onsite brewery. Today you can climb the stairs to what is now the roof but was once the second floor of the building and get a bird's eye view of the ruins and grounds. Various workshops, the pharmacy and infirmary, monk's dormitory and the afore mentioned prison are also open for exploring. And let us not forget the church itself as it was and still is the centerpiece of the abbey grounds. The sky is now its ceiling yet it is so easy to imagine how impressive the structure must have been when it was fully standing.

But by far, my favorite part of the abbey was its two remaining gardens. Gardens played a central role in the functioning of any community and as such were a vital part of abbey life. There was typically a cloister garden, a vegetable garden, a fruit orchard which doubled as the monk's graveyard, and a medicinal plant garden. Today, what is called the square garden and the wild garden remain. The square garden is manicured and filled with neat plants, gurgling fountains, benches for resting and wide pathways making it feel slightly regal and formal. It sits in juxtaposition to a backdrop of decaying ruins giving it a rather medieval and haunted feeling. The adjacent wild garden, however, is just that. The gardens are filed with (purposefully?) overgrown flowers with grasses hiding much of the more narrow paths and benches. And this garden is fragrant with herbs. Scents of lavender, mint and dill fill the air and grape vines, heavy with tart green fruit, hang over the trellises. Although this garden is only separated from the passing road by a brick wall, it feels untouched by modern society as though it is a world away from today. It is a truly tranquil place and I could have sat there forever.


The abbey grounds are the perfect place to spend a few hours walking, picnicking and simply enjoying the day. Paths are well marked, dogs are welcome on much of the grounds and there are plenty of benches and picnic tables for sitting and relaxing. And unlike many ruins we have visited, you can actually explore just about every nook and cranny of the old abbey. And if the winding stone stairs, shady paths and mysterious nooks aren't enough to entertain you, on the day of our visit there were even children's lawn games set up for visitors to partake in. Have you ever wanted to play "throw the ring around the monk"? If so, this is the place for you.