With The Bad Comes Some Good 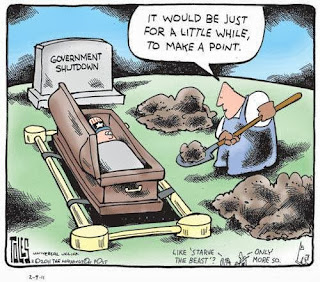 The U.S. government is in the midst of day four of its shutdown. Or pseudo-shutdown, since it appears that large segments of the government are still at least partially open for business.  For the most part agencies that support national security remain open; active duty military personnel are working and getting paid while most of the entryways into our country and the FAA is making sure our skies are still safe.  The departments of Education, Commerce, Interior, and Justice along with numerous others are mostly closed and operating with minimal staffing.  Even the National Park Service has closed their parks, museums, monuments, and green spaces to the public.  These closures and their impact reach far beyond those employees who are not able to work and receive paychecks.  State and local governments, small businesses, and the entire U.S. economy is being negatively impacted by this ongoing impasse.  And why does the government find itself at such an impasse to begin with?  Everyone seems to have an opinion, one that points the finger at the other side but Marlin Stutzman, a Republican Representative from Indiana probably said it best with "We are not going to be disrespected.  We have to get something out of this.  And I don't know what that even is."  Brilliant!


But of course Congress is open and working, although how much work is being done is a topic of great controversy.  Members of Congress, the very people whose inability to reach consensus, got us into this mess, are getting paid since their salaries are funded from a line item that is separate from the Federal budget.  However, some members of Congress are refusing their pay either through holding it in escrow or donating it to charitable causes until the budget is passed. Senator Lindsey O. Graham (R-SC) explained it best when he said, "I shouldn't get a congressional salary while other federal employees are denied the ability to go to work."  But not all members of Congress are so giving. Mike Lee, a Tea Party Senator from Utah who initially said he was keeping his paycheck because "I am working.  I will continue to be paid." has now changed his tune and is pay to charity. (Umm.....what about those other Federal employees who are required to work yet not receive their paycheck until this debacle is resolved?).  As of yesterday, 123 lawmakers have publicly announced the donation of their checks until a resolution is reached.  But that certainly leaves a lot who feel as though they deserve their money.  Do they? 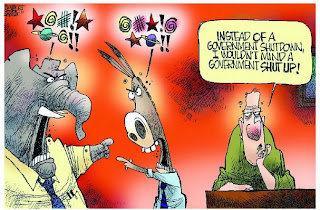 But there is a bright spot in all of this doom and gloom.  Outside of the political muck that is suffocating Capitol Hill, individuals and businesses large and small are reaching out to help those people who are hurting because of the shut down.  I've seen support groups spontaneously pop up with the sole purpose of supporting their colleagues, neighbors, or even complete strangers who are furloughed or not receiving their pay checks.  Sam's Club, a membership only mega-conglomerate that is a part of the Walmart empire, and not my favorite business by any means, has reached out the the Department of Defense community by offering free memberships to military families for the duration that stateside commissaries are shuttered.  For those families who live paycheck to paycheck and rely on the reduced food prices found at military commissaries, this offer may mean the difference between feeding one's family or going without.  And USAA, a large military and public sector friendly bank is offering no-interest loans for select federal employees whose paychecks stop.  Inside the Beltway restaurants and bars are advertising "furlough specials" with all day happy hours and reduced meal prices for people with federal identification (Congress excluded).  The Bishop of the National Cathedral has offered their garden for weddings that had been planned for the National Mall and are currently not allowed because the park is closed.  Charity organizations throughout the Metro DC area are putting out calls for furloughed employees to volunteer and a homeless shelter in Alexandria, Virginia has gone as far as organizing a furlough volunteer day.  Fibre Space, a quirky yarn shop in Old Towne Alexandria has been hosting free knitting lessons for furloughed employees all week long.  Other local businesses are offering similar incentives in an effort to support their local communities.
I know this is just a short list of the outpouring of support that is being offered but it demonstrates how communities are amazingly resilient and have a history of rallying together when the going gets tough.  These bright spots remind me that people are genuinely good and do care about their fellow human beings.  We've seen it time and time again and we are seeing it now that when the going gets tough, Americans get going.  Now if only Congress could work together as well.  Short of that I hope they are noticing that a solidarity is forming and it is a solidarity against them.  And that should scare them. 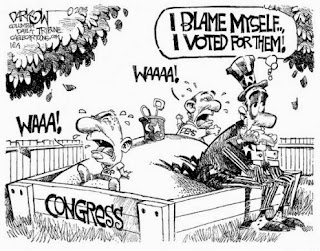