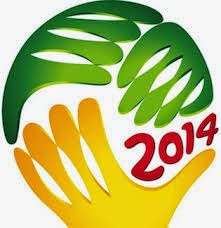 Football fever has struck here in Belgium and our house has not exempt. By football I am referring to European football, a.k.a. soccer in the United States. Maybe it is because the United States has the National Football League, that padded, helmeted, testosterone driven sport that is as American as apple pie, that what the rest of the world considers football has never really caught on there. (There are teams but by the national team coach's own admission, they aren't very good). But here in Europe, and the rest of the world for that matter, football is big business year around. And during the World Cup, it is all that everyone here is talking about.

From an early age kids in Europe learn to play football. Back in Albania Sidney was just learning to walk but he was in the street kicking a football around with the neighborhood kids. Every community had pick up games for players of all ages and just about any semi-open surface could be jury-rigged into a football field. I have yet to visit a European city or town that didn't have at least one football stadium. (And even in Albania, where reliable electricity wasn't a guarantee, these stadiums not only had lights but giant generators ready to fuel them if need be). Games draw mobs of often unruly spectators all rooting for their hometown team and for those who can't secure tickets restaurants, cafes, and pubs will set up screens to appease their fans. We've even joined friends and been a part of the crowd cheering on the game. It seems as though everyone is either playing or watching the sport. In fact, according to FIFA, the international organization that regulates football, there are 265 million football players around the world making it the single largest sport across the globe. Yes indeed, football is big business.

Whereas the National Football League has an annual Super Bowl, the World Cup, the granddaddy of football, occurs once every four years. 2014 is a World Cup year and as such, this summer Brazil is hosting the games. As with all high profile, extraordinarily expensive events, much controversy surrounds the event. Proponents await anxiously for the games to begin and vie for over priced tickets while opponents cite everything from corruption and the waste of money to human rights violations are reasons a country should not host the games. But love it or hate it, for me there is something wonderful about seeing teams from across the globe descending in a single location and playing a game that they love. Perhaps football is the great equalizer.

Living in an international community in Belgium I am feeling and seeing the sense of excitement on a daily basis. In the weeks and yes, even months leading up to the World Cup, people were talking about the big game. I honestly have no idea whether Belgium's team stands a chance at winning but regardless of this, Belgian football pride has been prominently displayed. The local grocery stores have been running promotions supporting the Belgian Red Devils and media coverage was extensive when the team boarded their plane to fly to Brazil. Flags and banners are prominently displayed in cafes and restaurants and in the past few weeks these flags have been hanging from the windows of private residences. Cars are even sporting black, yellow and red side mirror wraps in honor of the Belgian team. (Maybe I am missing out on the latest trend but I had never seen such a thing until they started appearing a few weeks ago). I've even seen otherwise fashionably dressed women wearing plastic black, yellow and red leis around their necks. Apparently everyone is getting in on the games.

But because we are in a community surrounded by people from so many other countries, the Belgian team isn't the only one people are rooting for. Each country represented here is hosting their own events when their teams are playing and inviting others to join them. Facebook pages are filled with commentary about good and bad plays and calls. Even those countries without representation in our community (Ivory Coast or Uruguay anyone?) have fans. I must admit, it is all kind of exciting. While we haven't been staying up into the wee hours to watch the games (well I haven't been anyway), we have been catching as many as we can. Each morning Sidney is asking when he can watch football (if we slip up and call it soccer he is quick to correct us with his newly found Belgian-French accent). While he waits for a game to begin he kicks his own football around in the yard then reenacts the kicks, slides, and trips of the players while the game is on. Who needs instant replay when this kid is around? Do we have a favorite team? Not really. I have a tendency to root for the underdog but I guess it all depends upon who is actually playing at the moment. And the fact is that it really doesn't matter. Because at the end of the day it is the excitement of the game that is so contagious.
Posted by Zosia at 10:50