The Secret Tunnels Of Dover 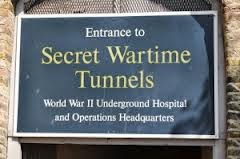 Last week I blogged about our explorations of Dover Castle. What I didn't talk about at the time was the vast network of tunnels that exist in the cliff walls under the castle grounds. These tunnels, along with their neighboring underground hospital, played a vital role in World War II and are just as impressive, in not more so, than the expansive grounds above them.

The tunnels themselves were not new during World War II; smaller ones had first been dug during the Middle Ages as a means of communication between soldiers as part of the fortress's defense system. They were expanded during the Napoleonic, with the narrow hallways serving as barracks for up to 2, 000 British soldiers (and to date, were the only tunnels that ever served as barracks). The tunnels were once again expanded during World War II during which time they served as a hospital, an air raid shelter and the nerve center for the evacuation of both British and French soldiers from across the English Channel during the Battle of Dunkirk. Code named "Operation Dynamo", under the direction of Admiral Sir Bertram Ramsey, a total of 338,000 British and French soldiers were rescued from the beaches of Dunkirk, France and carried across the Channel to England. As the war continued, the tunnels became a telephone operations center whose needs grew so much that the tunnels were further expanded. During the Cold War the tunnels were the planned regional seat of government for 300 military and government leaders should a nuclear attack occur. NATO even carried out secret exercises on the site in the days before the Cuban Missile Crisis. Fortunately, they were never needed for this purpose. Today, the total length of the tunnels and rooms, some of which are inaccessible, are up to 150 feet below the surface and are just over three miles long length.  And after years of being closed up and forgotten, they are open to the public.

The overall exhibit was quite impressive. We entered the tunnels on their land side before emerging an hour later on the other side with a sweeping view of the English Channel. But I'm getting ahead of myself. One of my favorite things about touring foreign (from an American's perspective) historical site is learning about history from a different perspective. And this tour did not disappoint. First our tour guide led us down a long narrow set of stairs deep into the cliff walls and through a series of scenario rooms depicting the various phases of the war. Sitting on a bench in a chilly and dimly lit room, we heard Winston Churchill's announcement that Britain had entered the War. We were later "evacuated" down the tunnel into another chamber where we viewed maps and charts depicting the routes of the fighting armies. We were allowed to peek into rooms that served as offices, living quarters and the telephone operations center. The tour concluded with a self guided tour of other period documents and memorabilia. It amazed me to think that this virtual city unknowingly existed right under cliffs.

Tunnel tours are included in the price of castle admission and take place every 20 minutes. Wait times may be lengthy during peak times.