Sometimes You Just Need to Get Away

That’s how I felt following the craziness that was our Thanksgiving week.  In looking at our schedules I realized that we actually had a “free” weekend before the Christmas rush began.  Instead of staying home we decided a quick weekend get away to Greece was in order.  (Actually, I decided that I needed to stock up on a few items from IKEA and the Ioannina, Greece store was the closest and easiest one to get to).

Having left the hotel details up to Glenn, we piled into the car on Friday afternoon and headed south on a “new and improved” Albanian highway.  The weekend was a whirlwind but one of the highlights was our hotel (Grand Serai Congress & Spa )complete with a balconied suite, an unlimited supply of hot water with amazing water pressure in the shower, and a buffet filled with baklava and cheeses from all over Europe (no Albanian white cheese for me this weekend!).  Christmas decorations and music filled the lobby and helped me get into the holiday spirit.
We spent Saturday exploring Ioannina’s walled Citadel, shopping at IKEA, and just spending time as a family.  It was exactly what I needed to recharge my batteries.  Despite the economic crisis plaguing Greece, we saw little evidence of the country’s problems.  Families were out and about in the city and money was being spent.  We have been enjoying our time in Albania but we also relished the fact that the streets were free of litter, traffic laws were obeyed and we had “western” amenities at our disposal.  There are so many things that you take for granted until they aren't readily available.
Sunday we meandered our way back towards Tirana taking a slightly different route.  The topography of northern Greece is almost identical to that of southern Albania (after all, they do share a border and the actual border had been disputed for years) but it was immediately noticeable when we had left one country and entered into another (and I’m not just talking about having passed through Customs).  The roads on the Albanian side of the border were noticeably narrower and littered with trash.  Rows of old bunkers lined the hillsides with their observation holes pointed south towards Greece.  Policia Rruga (traffic police) were randomly (or so it seemed) pulling cars over and questioning the drivers.  Yes, we were definitely back in Albania and on our way home.
Our homeward trek took us up the Ionian Coast through Saranda, Himare, and Vlore.  Quaint seaside villages hugged the craggy mountains.  Herds of sheep and goats grazed on the hills- and occasionally crossed our path.  The road was surprisingly well maintained but the hairpin turns and switchbacks made it slow going.    We stopped in Porto Palermo to visit Palermo Castle.  This well preserved castle sat on a beautiful  isthmus sporting views of both Corfu to the south and the Bay of Palermo to the north.  We spent time exploring  cavernous rooms and dark nooks that seemed like they belonged in a Nancy Drew mystery.  I think this castle has to be one of the best kept secrets in Albania. 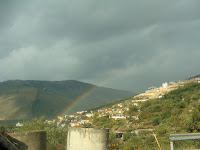 By the time we arrived back in Tirana we were all simultaneously tired and rejuvenated.  We covered a lot of area in three short days and listened to more Christmas music than is healthy but it was worth it.  As much as I’m loving our life in Tirana it can get quite exhausting.  These quick get aways are  just the solution. So much so, that I’m planning our next one now.
Posted by Zosia at 14:45