Under an Iron Fist

Albania has a long and storied history. Some of it is grand and heroic- the national hero Skanderbeg is a legend whose story permeates Albanian culture.  Much of Albania's history and national pride revolves around fending off conquering empires.  A much darker part of Albania's history, however, is some of her most recent.  The era of Communist rule from 1943 to 1992 was one filled with terror and persecution and its horrors are still fresh in the memories of many Albanians. 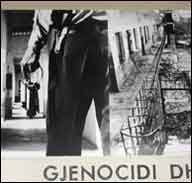 Known as the People's Socialist Republic of Albania, at various times the government found themselves aligned with neighboring Yugoslavia and the more distant U.S.S.R. and China. Fearing what they viewed as subversive activities, in 1952 the Albanian government, under the leadership of the disturbed dictator Enver Hoxha, enacted a penal code that required the death penalty for anyone eleven years of age or older who was found guilty of conspiring against the state.  Following Stalin's death and what Hoxha viewed as the Soviet's traitorous actions against Communism, Albania withdrew from the Warsaw Pact and eventually severed all ties with the U.S.S.R.  A new alliance was formed with China and inspired by the Chinese Cultural Revolution, Hoxha embarked upon his own cultural and ideological revolution by renouncing professionalism in the army, slashing the salaries of mid and high level officials, and exiling white collar professionals to toiling in fields and factories.  Farms were collectivized, churches closed, ministries eliminated, intellectuals persecuted, and the education system was reformed.

Albania eventually turned completely inward. They severed ties with China and fearing foreign influence, entered into a long period of self-imposed isolationism.  It was during this time that Hoxha had thousands of concrete bunkers built throughout the country.  Hoxha began to purge the executive leadership from his remaining ministries and initiated slander campaigns accusing leaders of spying for the United States, British, Soviet, and Yugoslav governments.  As Hoxha's health declined and his apparent paranoia increased, former comrades disappeared or died under mysterious circumstances and all of Albania appeared to be on an increasingly downward spiral.

With the crumbling of the Berlin Wall and the emergence of the Velvet Revolution, Communism throughout Eastern Europe was gradually replaced with democratic ideals and fragile democratic societies.  Albania's transition period was as bloody and ugly as her recent past.  Through the perseverance and persistence that has marked the country's entire history, Albania emerged as a democratic nation and quickly sought to rid itself of all reminders of their Communist period.

Last week I visited Albania's National Museum of History for the first time.  One of their newer exhibits is a heart-wrenching depiction of Albanian life under Communism.  Although small, the graphic (necessarily so) display of artifacts and photographs drove home the horrors of what life must have been like during this dark period in Albania's history.  During the visit my emotions were as raw as they had been during my first trip to the Holocaust Memorial in Washington D.C.

Two members of my party were Albanian women who lived through this period.  Their emotions further fueled my own as they identified photographs of family members and family friends who had been persecuted or executed for being intellectuals who rebelled against the Communist regime.  They shared their personal stories of the fear that permeated their society as clergy and intellectuals were systematically rounded up and persecuted while religious institutions were shuttered or converted into military outposts and warehouses. Perhaps the most chilling of all, however, was the collection of tools and torture devices that had been used to kill dissenters.  A long list of names of all the Albanians known to have been killed by the ruling regime during this time brought a somber close to this powerful exhibit depicting this ugly era.

I was relieved to leave the museum and return to the bright June sunshine.  This exhibit was one of the most difficult ones I have seen in a long time.  This difficulty is what makes it so important.  Unlike so much of Albania's history, this era is not ancient history.  Today, most Albanian adults have at least fleeting memories of this dark period.  As hard as it may be, I believe that it is important for everyone to know their history and that of the world around them.  Not knowing opens up the possibility of history repeating itself and this is more often than not, not a good thing.
Posted by Zosia at 14:13