An Albanian 4th of July

Last week our Embassy hosted its formal Independence Day celebration.  In true American form, the event was not held on the actual holiday; rather a date of convenience was selected instead.  This date change was confusing for many guests who couldn't understand why we were celebrating the Fourth of July in late June.  (In Albania, holidays are celebrated on the actual day- if that day happens to fall on a weekend, you don't get the following Monday off to celebrate).  For friends who asked, I was unable to provide a good explanation as to why we did this.  All I could say was that this is the way we tend to do things in America.  That, became a good enough answer.

As we have discovered, national days take on a whole new meaning when you are living abroad. For us, American holidays are often met with a void; while our Embassy may be closed, the rest of Albania is open for business.  (Albanians may wish us a happy Fourth of July but holidays such as Columbus Day, Memorial Day, and Thanksgiving are unacknowledged.  This results in a strange disconnect between the actual holiday and making it into something other than an unusual day off in the middle of the week.  Personally, we spent the actual day grocery shopping and preparing for an upcoming reception.)  Every country has its share of national days and even here in tiny Tirana, we are regularly invited to a variety of national days, reunification days, and other patriotic celebratory days for the various embassies in the City.  Some months are busier than others but at each event the celebrating country seems to be able to share their traditions while incorporating a uniquely Albanian twist into the celebration.

For the second year in a row Glenn and I were invited by our Ambassador to stand in the receiving line at our celebration to help welcome the 500 plus guests who had been lucky enough to receive a coveted invitation.  We had been in Albania for a little over a week when we attended last year's celebration; as such, much of that event was a hot, jet lagged blur for me.  This year was different. Not only was I involved in the planning and implementation of this event,  but this year I actually knew or at least recognized a fair number of the people who attended.  I was also much more alert and noticed details that I had missed during our first go-around.

First there is the actually greeting of guests as they arrived.  Shaking hands with that many people is not for the faint of heart.  Even if you aren't a germ-a-phobe, by the time the meet and greet portion of the event ends you have the persistent urge to wash your hands (hence the reason I never go any place without a stash of anti-bacterial wipes in my purse).  It wasn't until I had the opportunity to shake that many hands that I actually gave any thought to this simple action.  Whether limp and damp or dry and bone crushing, I've come to realize that handshakes say a lot about the person behind the grip.  Military- especially Eastern European- hand shakes tend to be rapid and knuckle crushing.  (Over the past year I've stopped wearing a ring on my right hand in order to reduce the potential damage to my right hand that comes from these over zealous greetings).  Other handshakes are as lifeless as an overcooked noodle.  If I wasn't looking I wouldn't even be aware that a handshake took place.  By far the worst handshake, however, is the sweaty palm.  Whether it is firm or gentle it leaves me wanting to discretely wipe my hand on my skirt (yet another reason to wear something that does not require dry cleaning).  Finally, there are the people who won't shake my hand. Whether it is a cultural taboo to touch a strange woman or I don't rate high enough on their significance scale, a number of guests blew right past me without slowing their pace.  I don't take it personally; rather I chalk it up to my overall experience.

The other thing I noticed at our reception was what people wore.  Again, military members arrive wearing uniforms.  This makes it easy to both spot and recognize them.  Civilian attire is more open to interpretation. Guests wore everything from skinny jeans and strategically torn tee shirts and micro mini dresses to cocktail attire, business suits and everything in between.  Not everything was seasonally appropriate either:  I spotted at least one fur trimmed outfit. This is outside. In June. In Albania. I was hot and itchy just looking at it; I can't even begin to imagine actually wearing the outfit.  Given that this was an outdoor event on a large grassy lawn, I would have expected more outdoor friendly footwear.  Instead, the number of Manolo Blahniks and cheaper knock offs worn by female guests was astounding.  I would never dream of wearing stiletto heels to an outdoor event but apparently I am in the minority on this.  If nothing else, this fashion parade only added to the evening's entertainment.

The actual reception was nice.  The lawn of the National Gallery was tastefully decorated and the temperatures were significantly cooler than I remember them being last year.  Both the American and Albanian national anthems were impressively sung by a young Albanian singer from Vlore.  A visiting U. S. Navy band provided background music throughout the reception.  Food and drink flowed freely, speeches were made, guests mingled, and the evening was capped off with a short display of fireworks.  Considering the fact we are in Albania and there wasn't any hotdogs, flip flops, or beaches in sight, it was a nice Fourth of July celebration.  It certainly wasn't like the celebrations I remember as a child, but it was a typical national day celebration with a local Albanian twist. 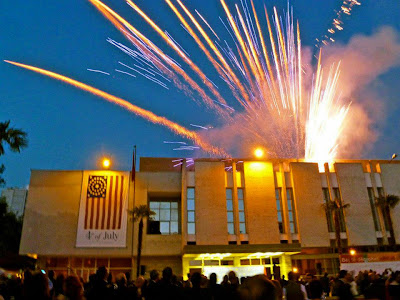 Until we do it again next year, Happy Independence Day America, with love from Albania!