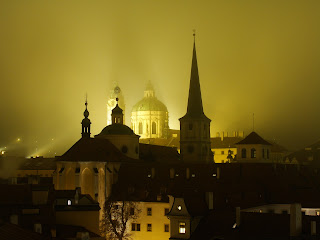 We recently spent a long weekend exploring the amazing city of Prague, Czech Republic.  Prague was the latest stop on our bucket list of must see European cities and she certainly didn't disappoint.  As has become our custom, Glenn picked our hotel and was once again right on in his choice.  Eschewing our normal habit of staying in small, independently owned hotels, Glenn chose a suite in the Best Western Royal Palace Hotel.  My first reaction upon hearing his hotel selection was to shudder; just the name Best Western makes me think of small dank hotels in questionable neighborhoods.  That however, is purely an American concept.  It turns out that many of the Best Western branded hotels in Europe are very nice places.  Our suite had not one, but two terraces affording us views of both the Vlata River and Stare Mesto and Mala Strana and the Prague Castle.


The weather was wonderfully fall like and perfect for roaming the streets playing tourists.  While the air didn't have that "fall in New England" feel that I so miss, the changing leaves and cool evenings were as close to the autumn weather of my childhood as I am going to get this year.  We spent two entire days just wandering without any particular agenda through the narrow streets of Mala Strana (new Prague) and Stare Mesto (old Prague).  We ate, drank, and photographed our way through the City burning off those extra calories by carrying Sidney a good portion of the time.  With the funicular out of serve, we huffed and puffed our way up Petrin Hill with an uncooperative three year old then looked down on all of Prague from the top of Petrin Tower, a miniature replica of the Eiffel Tower.  Despite the overcast skies, the view was amazing.  (My fear of heights kept me from fully appreciating the sights but my two fearless boys completely enjoyed looking down).  Dating back to the 9th Century, Prazsky Hrad (Prague Castle), is a UNESCO World Heritage Site and is the largest castle complex in the world.  We spent time exploring the numerous churches, including the impressive Saint Vitus' Cathedral, tucked away courtyards, and yes, water fountains, contained within the complex.


Crossing the Charles Bridge early on Saturday morning we were treated to spectacular river views and none of the crowds that would clog this pedestrian only area a few hours later.  The Astronomical Clock in Old Town Square is the oldest European clock of its kind and we witnessed several brides and bridegrooms having pictures taken under this iconic site.  The most impressive sight of the entire weekend however, was the Church of Our Lady Before Tyn lighting the square at night.  We first saw the church during the day but looking at it anchoring the square at night was was a totally different experience. I only wish that our pictures could do the scene justice.


As with all good things, our four days in Prague came to an end too quickly.  Our short stay did serve its purpose of rejuvenating us and providing us with yet another glimpse of Europe's rich culture.  Next up on our international agenda-  Christmas in Bavaria!  If only the next seven weeks will fly by.