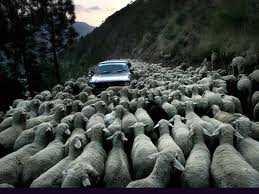 Today is the single day of the year that I've learned to dread during my past three Septembers here in Albania.  The third Monday of the month means the start of the Albanian school year for both public primary and secondary schools and as well as the public universities.  After the first day of school students will get themselves their via bus or walking but on this first day, everyone, regardless of age or their physical distance from school, seems to be chauffeured their in private vehicles.  (Hence the traffic jam).  I know I get spoiled during August when everyone flees the city for the beach and the streets are all but deserted regardless of the time of day.  And then, seemingly overnight, everyone has returned to the streets of Tirana causing the inevitable congestion that turns our less than five minute commute from our house to the Embassy into thirty minutes of sheer hell and frustration.  And this year, despite knowing what was coming, was the worst one yet.
It was raining when I woke up this morning.  Dark clouds loomed over the city and rain was coming down in buckets.  Traffic is always bad when it is raining.  In addition to the weather problems, this year we have active road construction going on between our house and the Embassy.  On the best of days this often causes traffic to bottleneck and move at a snail's pace.  I should have suspected how bad the traffic was when our normally punctual nanny (she actually always arrives early) arrived a few minutes late saying that the traffic was bad.  I had seen the line slowly snaking down the road when I had peeked out the window earlier but I had assumed that it was just a momentary blip.  Oh how I wish that was the case.  As we pulled out onto the main road I immediately saw how bad it really was.  Traffic simply wasn't moving in either direction.
Actually, I take that back.  Traffic was flowing down the hill in the far left lane that was under construction. Yes, furgons and Mercedes were dodging the construction equipment that despite the heavy rain, was trying to make progress on the new road.  Slowly, ever so slowly we moved down the hill and after some time we saw a bus heading up the road towards us.  But then it had to stop since it was met head on with yet another car that had decided to bypass our long line of traffic and zip down the other lane.  Perhaps the driver thought he was more important than the rest of us but for whatever reason he decided that he wasn't going to sit at a standstill in the long line of cars.  Unfortunately, this is an all too common occurrence in Tirana and only adds to the traffic problems.  Despite his numerous attempts, no one was willing to let him squeeze into the line ahead of them.  Usually someone caves which only perpetuates the bad behavior.  But with the bus unable to move forward, traffic only continued to idle.  Finally we saw a police officer trudging down the hill with an umbrella. Naively I thought that he might be on his way to give the illegal driver a ticket. But because this is Albania, that wasn't the case. Instead the officer ordered a car to create a break for the wrong doer and allowed him into the cue.  And yes folks, this is partially why we have so many traffic problems.
But the commute only got worse since we weren't quite half way to the Embassy at this point.  Remember all of the cars that I had said were driving through the active construction zone?  Well, half of them were realizing they shouldn't go any further and were trying to turn around and head back up the hill.  The other half were trying to squeeze across two oncoming lanes of traffic (that really should have only been one lane) to merge into the line heading down the hill. And this inevitably caused more problems.  At one intersection there were cars trying to simultaneously turn right and left which resulted in no one being able to move in any direction. We were so distracted by this mess, with yet another police officer haphazardly standing in the middle of it all, that we almost missed the ten or so people who spontaneously jumped out of their vehicles and ran to what appeared to be a stalled car. But it wasn't a stalled car; rather the car had driven into an open man hole and its tire was now stuck.  The group of men lifted the car out of the hole before returning to their own vehicles.  And then traffic resumed creeping along as though nothing out of the (Albanian) ordinary had happened.
And that is the strange thing; vehicle congestion, road hazards that would be unimaginable in the western world, and a blatant disregard for traffic laws coupled with an inability by the police to enforce them are every day occurrences in Albania.  It is not unusual to see vehicles driving in the wrong direction, running red lights, turing left from the right lane and vice versa or speeding by the hapless police officers who attempt to flag them down.  Some days, like today, are simply worse than others.  Hopefully tomorrow will be better.
Posted by Zosia at 15:06