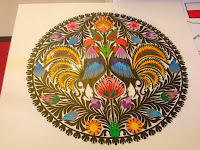 Wycinanki is the art of Polish paper cutting.  Dating back to the  mid 1800s, this form of folk art is thought to have originated with shepherds who cut ornate designs out of pieces of bark.  Over time the art evolved into a craft performed mostly by women who used paper to create decorative arts for their homes and churches. Designs vary by region and often reflect natural themes.  These designs can be simple or ornate and often include animals, birds, and flowers, all ordinary sights in every day life.  This artwork has transformed from folk lore into something trendy with Wycinanki inspired designs showing up on handbags, wall hangings, and fashion runways around the world.  Today this folk art is thoroughly modern.  Fancy and colorful papers are just as apt to be used are the basic black or white sheets of years gone by and while shepherds used sheep sheers to cut their designs, modern artists use small pairs of scissors.  Some things definitely have changed but the ideas remain the same.

I was lucky enough to be able to participate in a paper cutting workshop while in Warsaw. The workshop was facilitated by Susan Throckmorton, a Mount Holyoke alumnae and Warsaw resident who is a member of the American Guild of Paper Cutters.  Susan's work (examples are shown above and below) is truly impressive.  From black and white designs to multicolored birds and medallions, the intricate details are incredible.  It amazes me that with a few (or several) snips of the scissors, amazing artwork appears.

Our group was shown examples of the finished product and provided with pointers on how to begin before actually beginning.  The concept may appear to be simple enough but such details as the way the scissors are pointing--always towards you-- and the importance of moving the paper rather than the scissors themselves, makes all the difference in the finished product.  We were encouraged to sketch out our designs before we took scissors to paper and most importantly, since the designs are symmetrical, make sure we cut on the right side of our folded paper.


We were tasked with making a simple tree that we could elaborate upon to make as fancy or as simple as we chose.  Susan's were tiny with minute details but ours were larger in scale making the process significantly "easier".  (Or so we were told).  Regardless of how fancy we were going to go, we all started with a basic "stem" feature with birds, a traditional Polish symbol, accenting the base. From there the possibilities were endless.  We could go ornate with lots of intricate details or we could go simple.  As a student I struggled with geometry, symmetry, and have always struggled to visualize how things look so this project proved to be a challenge. While others in my class happily went about drawing and cutting, for the life of me I just couldn't visualize what each pencil marking and snip of the scissors would produce.  I was already impressed by Susan's skills but my attempt at my own piece of paper art only strengthened my admiration.  Paper cutting is hard work!

Now I have never been what I consider to be artistic, but I entered this workshop with the naive idea that I could produce something impressive.  Perhaps it was the "type A" in me but I thought this was possible.  But this is what I ended up with:


It wasn't nearly as pretty as I had envisioned but I didn't cut through the stem the way some other people did and my birds, those tricky symbols that either make or break the finished product, while not ornate, were symmetrical.  It wasn't good but it wasn't bad.  True to form, however, I'm thinking about how I can improve on this with my next project.  I've even bought the correct paper and scissors to make it happen.  Stay tuned!