A Lifetime Of Love 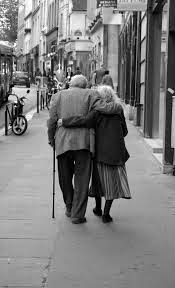 My maternal grandparents had been married for over sixty years when my grandfather passed away in 2008. They had met in the heyday of the pre- World War II years and corresponded through hand written letters while my grandfather was a solider in the Pacific. They married upon his return from the War and settled into the suburban life that was expected of couples of their generation. They raised two children, a boy and a girl, in their starter house that became their home for life. My grandfather worked for the family business then in his own company while my grandmother ran the household and in her spare time served as a Girl Scout volunteer.

My grandmother was always the more outgoing of the two; loving to socialize with friends and family and always on the lookout for the next fun activity to participate in. My grandfather was quiet and had a routine that included work, spending copious hours on his HAM radio and collecting guns. He preferred to stay home rather than travel saying he had travelled during the war. The one exception was a period of time during the 1980s when summer weekends would be spent in a camper trailer along the Connecticut River in New Hampshire. There he would simply fish for hours. While my grandmother was fun to be around my grandfather's silence and detached manner scared me. As I got older I remember hearing whispers that apparently the War had changed him. He would talk about bits and pieces of his war service but the stories were always superficial and revealed nothing about where he served and what he experienced. (It wasn't until after his death that I learned about the battles he saw and fought). These were the grandparents I remember from earliest memories.


When my grandfather developed Alzheimer's disease my grandmother cared for him at home before eventually moving him into a nursing home and then finally hospice care. As is often the case with his horrible disease, his decline was slow and painful both for him and those around him. Angry outbursts became common but my grandmother was stoically by his side throughout the ordeal. When he finally passed it was with a sense of relief. But suddenly after decades of being with her life partner, my grandmother was alone. Alone in a too big house that needed too many repairs. Alone and free of the responsibility of caring for a loved one. Eventually, after much waiting and decluttering, she moved out of house of over half a century into a nearby retirement community where she was able to maintain her independence in her own apartment yet have the comforts of an on site dining room, recreation center and most importantly for my social butterfly of a grandmother, lots of friends.

She has now been living in her new community for two years now and this is where we visited her during our recent trip to Massachusetts. Her apartment is cute and filled with relics from her old house including several photographs of my late grandfather. Due to distance it had been a long time since we last visited but I had heard that not only was Gigi, as she is now known to us, happy but she had a boyfriend. Yes, she is in her 90s and had been married for most of her life to one person, but she was dating again. And during our short visit with her we got to meet her "younger"--in his late 80s--new beau.

Seeing my grandmother and her "friend" as she introduced him, for me has been the highlight of our trip to date. Gigi appeared happier than I have seen her in years and years younger than I remember her being. Her friend was dapper, charming and obviously adored her and had survived the War without the same emotional wounds that had haunted my grandfather. He repeatedly called her honey and went out of his way to hold doors and help her in and out of the car. They giggled like school children yet squabbled like an old married couple when trying to decide which entree to split at lunch. They joked with each other and were more affectionate towards one another than I ever remember my grandfather being with my grandmother.

The whole scene was so heartwarming. I loved seeing my grandmother so happy and full of life and reminded me that love can happen at any age. Young love is wonderful but finding love again later in life. I can only imagine how nice it must be.
Posted by Zosia at 12:33