Our Belgian Beer Road: The Beer Of Brasserie St Feuillien 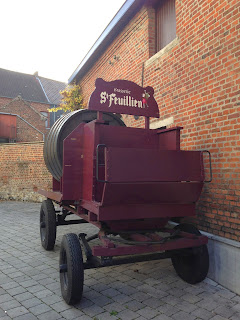 Beer and Belgium are pretty synonymous. After all when I first found out that we were moving to Belgium it was one of the first things I thought of (after NATO and before chocolate). I wasn't a huge fan of beef before we moved here but I must say that this national drink is growing on me. Since we've been here we've been enjoying discovering all of the beer that Belgium has to offer. Part of the fun for us is trying new (to us) varieties. I am apt to regularly bring home a few different bottles of beer from the grocery store with the hope of finding something new that we like. No beer has been bad, quite a few have been really good and some are so good they have us seeking out the brewery themselves. Our recent discovering of St Feuillien beer was one of those beers and much to our delight, thanks to Google, we discovered that the brewery is literally right down the road from us. So of course we had to go visit and that is just what we did on a recent Saturday afternoon.

The history of the brewery dates back to the 7th century when an Irish monk traveled to what was then called the Continent to preach the gospel. In 655 he was martyred and beheaded in what is now the town of Le Roeulx. Hid disciples later built a chapel on the site with the chapel eventually becoming the Abbey of St-Feuillien du Roeulx in 1125. Monks have  brewed beer for centuries and thus the tradition of a St Feuillien brewery was born. Today Brasserie St Feuillien is located on the same site of the former abbey and has been owned by the same family for four generations. The beers of St Feuillien are recognized for their quality and continue to win international awards at competitions across the globe.

The brewery itself recently moved their operations out of their original building and into a newly constructed adjacent one so that they could keep up with the demand for the product. (They remain on the same site however so they can continue to have ready access to the spring that has always served as their water source). During our tour we were able to visit both the new and old facilities. In the original building we climbed up three stories to view the gravity operated brewing and distilling tanks. We were able to sample some of the grains and the hops that are used in the brewing process. Our group was large but the bi-lingual guide talked all of us through the brewing process, explaining every step in their
brewing process as well as answering questions about the history of the brewery. Home brewing is a relatively new concept in Belgium (with so many wonderful beers readily available throughout the country there really isn't a need to brew it yourself), but there were home brewers amongst the group so a lot of questions were asked. From our third floor perch we could look down into the old brewing tanks before working our way down the stairs and out to the new brewery.

Whereas the original building had antique charm, the new facility was nothing if not modern with giant steel tanks and an automated bottling system that immediately made me think of the assembly lines seen on Laverne & Shirley. The new brewery is designed to do everything on a much larger scale. Here everything is concrete and stainless steel but the process for brewing and the quality of the beer remain the same. Only the quantity that is produced has changed. This was evidenced by the soaring stacks of kegs that filled much of the floor area.

Of course the best part of the tour was the sampling that came at the end of the tour. (There was orange juice available for the younger or non-beer drinking crowd). The final stop on the tour was the pub where we were able to try all of the beers that were currently available. And by sample I'm talking about full sized glasses of beer, which of course was served in the proper glasses. (Belgians are religious about serving their beer in the correct glass. And each beer does have its own glass). Like I said earlier, we had tried several types of St Feuillien beer before but during our visit we were able to also try ones that were new to us. We already knew we liked the bruin but Glenn really enjoyed both their Saison and Grand Cru. My favorites were on opposite ends of the spectrum; since we've been in Belgium I've discovered fruit beers and I really liked the mixed berry Grisette which was light and refreshing rather than sweet. And because it is the season, the spicy and heavy Christmas inspired Cuvee de Noel. Before we left we bought a few bottles of our favorites to take home with us along with a glass (because even at home Belgian beer must be consumed out of the proper glass).

And for you American based fans of Belgian beer, St. Feuillien is distributed in the United States and is set to expand its footprint even further. On the day of our visit one of the owners was on an exploratory trip to Boston and Chicago in the hopes of expanding their market. So look for St. Feuillien on shelves near you. If you find it, try it. It has become one of my favorite beers.

Individual tours on Saturdays at 14.00
Group tour can be arranged at other times
6 Euros for adults, 3 Euros for children over 6 includes tour and generous samples
Posted by Zosia at 10:00