This week I will become the mother of a five year old boy. How did this happen? It seems like just yesterday my teeny tiny preemie entered our lives. All 2 pounds  and 12 ounces of him came screaming into the world and he hasn't stopped talking, moving or exploring the world since then. Its been a wild ride so far with never a dull moment and the excitement just keeps on coming.

I remember the day we brought Sidney home from the hospital. Despite being 11 weeks old at the time, he was still a tiny peanut. After weeks upon weeks of assisting in his care in the NICU he was finally all ours. As I stared at him lying in his crib I was overwhelmed by love and fear. I loved this little boy with every inch of my being but I was scared since I didn't know anything about babies. Until Sidney was born I had never changed a diaper, I couldn't decipher whether his cries meant he was hungry, needed a dry diaper or he just wanted attention. And most of all, he was a boy. I knew nothing about raising a boy!

But what a whirlwind raising this boy has been. Sidney's moved three times, living in three different countries and is currently learning his third language. In the past five years he's visited more countries and acquired more frequent flyer miles than most people do in a lifetime. He has friends from every just about every European country, can recognize most of their native tongues and can identify most of the flags of the NATO countries. He is the first to welcome the new kid in his class (which in a military community means there is always a new kid in the class), is quick to give his mom hugs when he senses I am sad and has a stubborn streak that rivals my own. On the playground he is just as apt to be playing Star Wars as he is to be pretending he is a butterfly or a ninja. He loves books, playing football (a.k.a. soccer), never encountered a body of water that wasn't perfect for stone throwing and has never met a stick that wasn't worthy of being picked up and saved. And as of late, is obsessed with toy soldiers. I blame it on our trip to Normandy but since then he talks non-stop (in both French and English) about soldiers, specific World War II battles, and when prodded can even recite facts about General Patton.

And it was this love of all things army (not Navy of course because we are a Navy family but perhaps this is his own form of rebellion), that I found myself covered in green and brown buttercream frosting this past weekend. For a variety of reasons we had never thrown Sidney a birthday party and from the moment we arrived in Belgium last winter he has been planning his 5th birthday party. It was to be at the bowling alley on base (because every base has a bowling alley and having a party there is a right of passage for every military brat), with pizza and cake and all of his friends. A few months ago camouflage was added to the requirements. That meant camouflage invitations and goodie bags as well as cups, napkins and plates. Even the candles were camouflage. And instead of creating a light and airy cake I found myself frosting cupcakes and a cake with dark green and brown frosting and adding toy soldiers to the decorations for good measure. And much to my delight Sidney loved it all. He loved his multi-national classmates who attended the party (by my count seven countries were represented), the bowling, the pizza and cake and yes, all of the toy soldiers he received. As he declared to one classmate, this was the best birthday ever. And that is all that matters.

I still have no idea how to raise a boy but we're learning together. Like I said, there is never a dull moment.

Happy birthday little soldier! Whether you join the Army or the Navy, become a linguist, a doctor or a street performer, your mom will always love you. 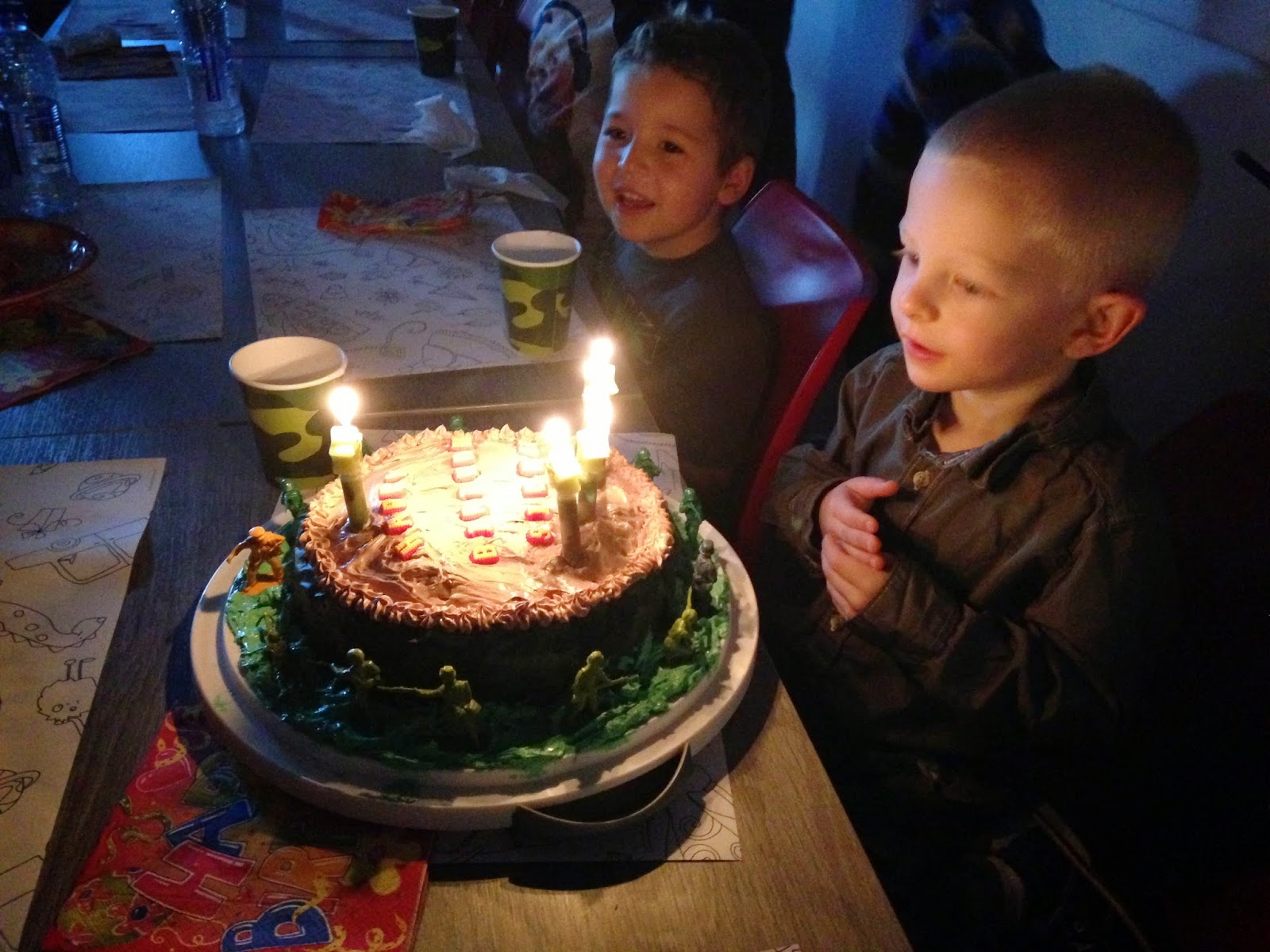