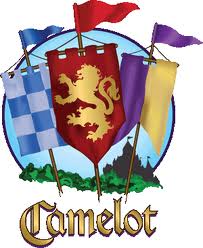 Camelot:  A time, place, or atmosphere of idyllic happiness.

Summers in Albania are long, hot, and sunny with rain being scarcer than ice in the Sahara.  It was June when we first arrived here and the days were indeed bright, hot, and ever so dry and dusty.  When the rain finally returned in the autumn, at first it seemed to only fall at night with the days remaining clear.  Repeatedly waking to damp grounds and clear skies Glenn quickly started to joke that Albania was like Camelot, a place where rain's only appearance is at night and the sun shines all day.  I just laughed the first time he said this and I continued to do so every time he has repeated this phrase over the past two years.

Fast forward to Spring 2013.  Glenn is no longer claiming Albania is Camelot. The past few months have been exceptionally rainy with heavy dark clouds dominating the skies.  Rain has been pouring down in sheets for days and weeks with only brief respites of sunshine.  Moods have matched the weather with even Albanians and seasoned foreigners complaining about their need for just a bit of sunshine.  This past week's forecast had predicted chances of rain varying between 75 and 90 percent for every day and for once the weather forecasters had been pretty right on.  They rarely seem to get it right so why couldn't they have been wrong in their predictions this week as well?

Tasked with planning the Embassy's Easter celebration, including a hoped for outside egg hunt, I was feeling particularly gloomy about the weather.  I've never really celebrated Easter, never really seen the attraction of an adult dressed as a bunny rabbit, and think there are generally better things to do than pump our children full of sugar in the name of a holiday that traditionally has nothing to do with bunny rabbits or candy.  Pile on the gloomy weather and the prospect of this event became even less attractive to me.  However, I know I'm in the minority in feeling this way, so I dutifully planned away creating a fun indoor event, and on the very off chance that there wouldn't be a deluge of rain, coming up with an outside "Plan B".  As crazy as it sounds, the plan was to bring 80 people under the direction of a handful of volunteers inside a too small space, provide them with arts, crafts, lots of food, and of course the a fore mentioned bunny rabbit.  There really wasn't any alternative.  Visions of sugar induced craziness had me considering an outside egg hunt in all but the heaviest of rains.  I was still planning on doing this as I trudged around on the water soaked Embassy grounds in the falling rain at noon yesterday.

And then something truly amazing happened.  In the span of a quick half hour the gray rainy skies gave way to a crystal clear blue color that I had not seen in months. Not only were there no clouds but the sun shone brightly (and almost too warmly).  Sure the grass was still wet but the puddles evaporated from the concrete pavers.  And with the sudden appearance of the sun came an equally drastic increase in the number of my volunteers.  All of a sudden I had more volunteers than I really needed.  (And in all my years of planning events that has never happened!).  After weeks of gray skies, wet weather and canceling outdoor events because of the rain, things were looking up.  Lawn games were played, eggs were hunted, and pictures were taken with the big bunny.  Food was eaten and creative juices flowed in the arts and crafts area with minimal messes.  All in all a fun, and relatively dry time, was had by all.  Maybe we are in Camelot after all.........
Posted by Zosia at 14:05