Standing Up To Violence 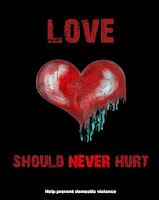 October is Domestic Violence Awareness month. Each year during this time, advocates, supporters, and survivors take to the streets and airwaves in an effort to bring awareness to this growing epidemic that strikes all too close to home. We live in a society where it is hard enough for women to come forward and admit that they are being hurt by their spouses and partners so it is just that much more difficult for men to do so.  While statistics show that most victims of domestic violence are women (three out of every four) that means men are victims too. Statistics regarding male violence are even harder to come by than those for women and they vary more as well.  But they are real and any number is one too many.  Regardless of how the numbers pan out, it is undeniable then men are also hurt by violence inside of the home and when one person is hurt, everyone is affected by it.


In college I was part of a campus wide effort that raised awareness about the effects of domestic violence.  Being that we had an all female student body, our focus was primarily on violence perpetrated against women by men but also female on female violence.  Domestic violence against men was never a topic we discussed or acknowledged.  After college I volunteered at a local shelter and was part of a hot line that answered calls from victims of domestic abuse.  I only received a few calls during my time (wo)manning the hot line but I did receive one call from a man.   Despite all of my training I remember my naive shock that a man was on the other end of the line (and not in the taunting or harassing way that angry men occasionally called the unlisted number).  This man simply needed someone to listen as he questioned whether the verbal and occasional physical assaults inflicted upon him by his wife were abuse.  In the end he answered his questions for himself but I remember my heart breaking as I listened to him talk, cry, and question.  (Emotions know no gender).  I still remember this call close to 20 years later and often wonder what became of him and his wife.   I never knew his name so I'll never know but I still wonder.  And unfortunately, he was definitely not an anomaly since men are victims of domestic violence as well.

Domestic violence can take many forms; it may be physical, verbal, or emotional and is often a combination of all three.  It is estimated that 835,000 men in the United States are physically assaulted by their intimate partners each year.  While physical abuse is apt to leave scars and outward telltale signs, verbal and emotional abuse can be even more damaging.  Insults, undue criticisms, and name calling may not leave physical wounds but their scars are present just the same.   While physical abuse is easier to identify--after all a physical strike is a physical strike-- emotional and verbal abuse is more difficult to identify. When is nagging or henpecking something more?  How does one identify where the line lies?  Like its physical sibling, emotional abuse wears people down and does lasting damage.  None of this is healthy behavior and all of it is detrimental to individuals, families, and communities.

Regardless of the gender of the perpetrator or subject of abuse, any violence inside of the home effects everyone who lives there.  Young or old, male or female, being subjected to or simply witnessing violence is detrimental to the household unit.  It all must stop now.  As such, I'm writing this blog entry to do my little part to raise awareness about this terrifying topic.  And you too, can do your part. If you suspect someone is a victim, reach out to them and offer your support.  If you can, attend a local awareness event in your community or volunteer your time and resources to an organization that supports survivors of domestic violence.  Every bit really does help.
Posted by Zosia at 15:40