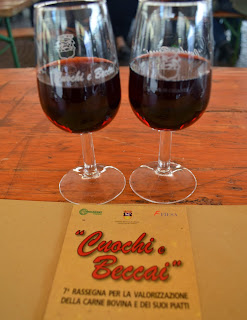 ......eat and drink like a Tuscan!  And that is exactly what we did during our recent trip.

All of Tuscany is beautiful but I am particularly partial to the town, or commune, of Greve in Chianti.  I first visited this beautiful place with my mom several years ago when we used Greve as our "home base" as we explored both Greve and the surrounding Tuscan towns.  Centrally located midway between Pisa, Florence, and Siena, amidst mile upon mile of rolling hillsides covered with vineyards, you can't ask for a more perfect location.  I had been wanting to go back and while we didn't spend the night in Greve during our recent trip, we did happen to visit on the most perfect of fall Sunday afternoons.  And it turns out that we were just in time for Greve's annual Cuochi e Beccai (Chefs and Butchers), a festival dedicated to typical Tuscan beef and beef dishes.

We weren't expecting to encounter a meat festival; rather we were hoping for a good meal, good wine, and perhaps the opportunity to fulfill Sidney's lunchtime request of "sausages."  (Yes, the boy who usually requests pizza or pasta for lunch wanted sausages while we were in Italy).  It turns out we were a week late for the festival, but due to inclement weather it had been rescheduled to the perfectly sunny October afternoon we just happened to be passing through.  Talk about luck!

Now in its seventh year, this food festival is a meat lovers dream.  Greve's small restaurant lined town square (which is actually shaped like a triangle) was filled with craft vendors and the largest outdoor grill I have ever seen.  The unmistakable aroma of grilling meat filled the air as we took in the sights around us.  Italian food is more diverse than many people realize with each region having their own specialties. Tuscany is known for their local produce, pure white Chianina cattle, cannellini beans, and of course Chianti wine.  And for 16 Euros a person, guests at the festival were treated to a heaping plateful of all of these delicacies accompanied by a commemorative glass of local wine.  Not only did Sidney get his sausages (four in all) but each plate also included a slab of ribs that were so tender they literally fell off of the bones and a thick piece of rare T-bone steak that could feed a small family for a week.  There was meat, meat, and more meat.

The event appeared to be popular with locals and tourists alike.  We took our overflowing plates and found seats at plank tables where our dining companions included a young Italian woman and her elderly father, a French couple who was roughly our age, and older British and American tourists.  The tables around us seated a similar hodge-podge of families, dogs, couples, and the ubiquitous groups of teenagers that we have come to expect in every city we visit.  Together we enjoyed the food and wine, discussed how good it all was in a variety of languages, and discovered that there really isn't a polite or easy way to eat meat with plastic forks and knives.  It turns out that fingers are universally acceptable utensils when eating ribs.

The meal was simple.  Chewy thick slices of bread, creamy white beans whose only seasoning was salt and pepper, and a variety of freshly grilled meat.  And it was because of this simplicity that this was one of the best meals I have eaten in a long time and the single best one we had during our Italian vacation.  We didn't plan on attending the festival but are sure glad that we happened upon it.  It was the perfect unexpected conclusion to our Tuscan adventure (while providing us with a week's worth of protein).