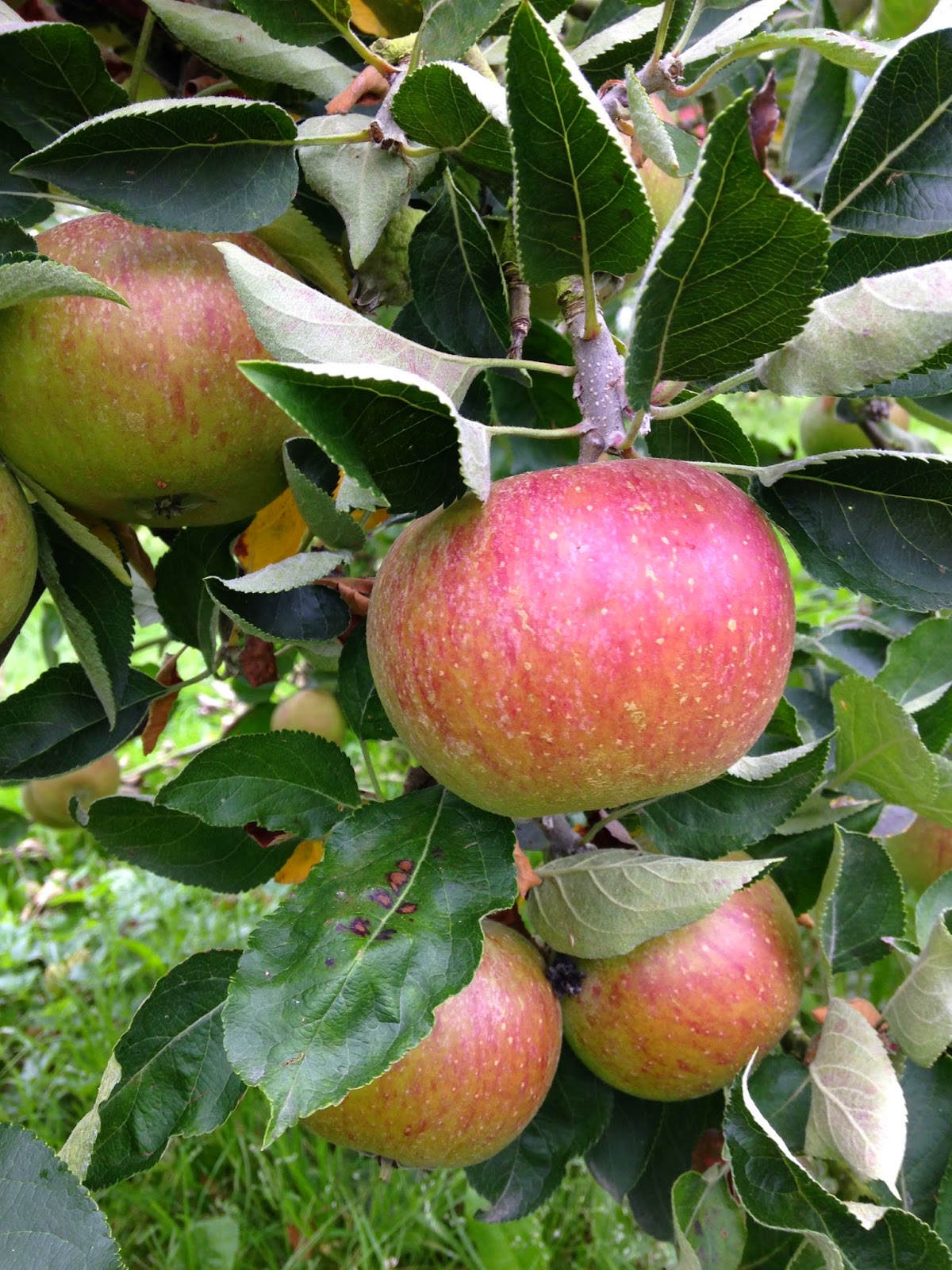 Nothing says autumn more than apples. When fresh local apples start popping up in the markets I know that fall is really here. When we were in Normandy last month apples and apple products were everywhere. Although I had a hard time accepting the fact that apples were ready--I mean, after all it was still August and to me, August is still summer---I thoroughly enjoyed the apple products I sampled. In most restaurants hard apple cider was more readily available than beer and I found myself enjoying its fresh, crisp taste. Normandy cider is less sweet than American versions and is very easy to drink. Mussels Normandie, with the shellfish being steamed in apple cider, was also popular and very tasty. And of course there is Calvados, that distinctive apple brandy that the Normandy region of France is known for. Our weekend in Normandy got me thinking about apples and wondering when they would be ready in Belgium. The answer, is now.

Growing up we always had apple trees in our backyard so there was never any need to go apple picking at an orchard. Later in college we would pile into cars and go apple picking at a near by orchard. Never mind that we all lived in a dormitory and had no need for copious amounts of fruit. It was more about the tradition of picking apples in the cool New England air each fall. When we lived in Albania we may have been able to pick pomegranates, lemons and Mandarin oranges in our yard but no apples. When asked, Sidney would tell me that apples came from the store. So I loved the fact that this past weekend we were able to take Sidney to the source and introduce him to the fall tradition of picking apples.


And boy was he excited. Following rough directions and the memory of what we thought was the location we found on Google maps (a large apple orchard is actually quite easy to spot when looking at the area from a bird's eye view), we made our way to the rural village of Henripont. Set along a canal, the village itself was quaint and once we entered the village proper all we had to do was follow the red, hand painted apple signs in order to reach our destination. In typical Belgian form it began to mist when we arrived but that didn't deter us. (The orchard actually has a supply of rubber galoshes that apple pickers can borrow if they like). And unlike the apple orchards of my childhood, these trees were were small with the fruit being low to the ground meaning that even the smallest of apple harvesters could actively participate in the process.

Using Google translate and very broken French to communicate we were given the lay of the land, handed a wagon and off we went to pick our own apples. There were several varieties of apples to choose from with all of the trees being heavily laden with fruit. Sidney did most of the picking, carefully selecting the fruit then placing it in our bag on the wagon. Prior to arriving we had cautioned ourselves that we wouldn't pick too many apples and we stayed true to the promise. Sidney wanted to pick more but we told him we would come back again. If you don't feel like picking your own fruit you can buy it pre-picked. They also sell pears, plums and squashes as well as apples for cider or sauce. And their freshly made apple cider? Be sure to buy a bottle or two. We'd go back again just for the cider.

So now that I have apples what are we going to do with all of them? We're eating them of course and I'm doing a lot of cooking. If you have apples on hand why not try apple speculoos bars, apple spice carrot muffins, apple cinnamon scones or apple skillet cake? Or if you want to go savory try apple Dijon pork saute or an apple and cheddar bread pudding. As you can see, we like apples in our house.

Culture Fruitiere du Point du Jour
7090 Henripont (Braine-Le-Comte), Belgium
067 55 22 64
Open every day except Thursdays in September and October, weekends in November
Bring your own bags or boxes as the orchard does not provide them
Prices for pick your own apples start at 1 Euro / kilogram; 1.50 Euro / kilogram for pre-picked

Follow the apple signs or because GPS coordinates may be the most helpful: