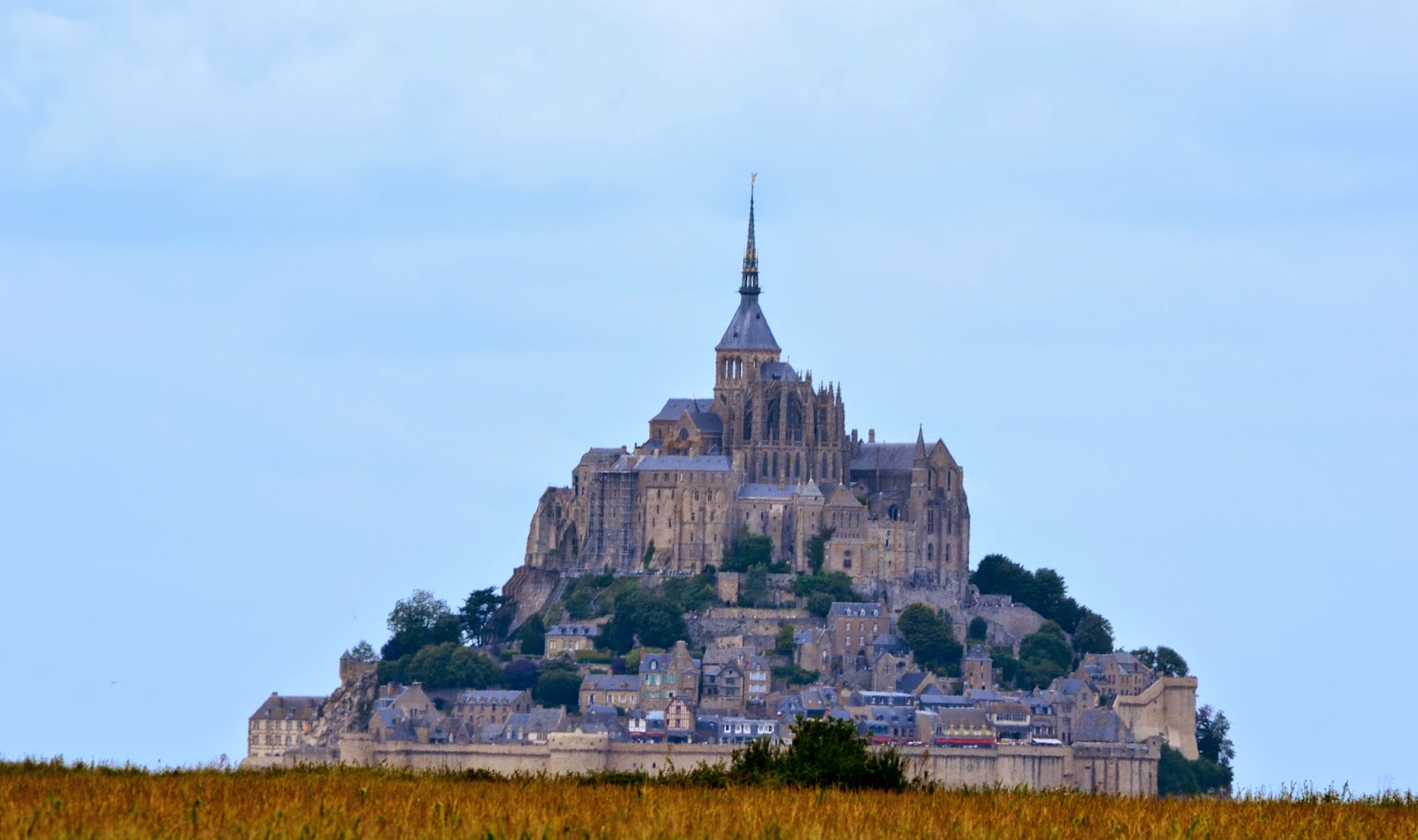 I loved our recent trip to Normandy, France and was moved beyond belief by the memorials and tributes to the historic events that happened here seventy years ago. But there is more to Normandy than World War II memorials and after two days of visiting cemeteries and battlefields, I was more than ready for a change of pace. So searching for something different, we set off to Normandy's the northwest corner to visit Mont-Saint-Michel and the famous Abbey.

Mont-Saint-Michel is one of France's most recognizable landmarks and is a UNESCO World Heritage site that is visited by over 3 million people each year. It is a sight I've seen hundreds of times in travel magazines and websites but nothing could quite prepare me for the experience of seeing the Abbey looming on the horizon for the first time. One minute we were winding our way along narrow roads through apple orchards, cow filled fields and tiny villages. We came around one bend and saw a spire in the distance. As we drew closer we realized that rather than being the steeple of a village church, it was the spire on top of Mont-Saint Michel Abbey that we were seeing. We were still several kilometers from the island when the full Abbey and her environs came into view. Perched on a rocky outcrop between the tidal plains and the sea was our destination. And it was truly breathtaking.

The island itself is quite small; located approximately half a mile from the mainland, it encompasses 247 acres and as of 2009, had a permanent population of 44 residents. A fortification since ancient times due to its strategic location, a church was first built on the site in 709. At the request of the Duke of Normandy, a community of Benedictines settled here in 966, building the first pre-Romanesque church. During the 11th and 12th centuries the abbey was expanded and by the 14th century a perimeter wall was constructed around the entire area to help protect the Abbey from invading armies. During the French Revolution the Abbey served as a prison before being restored in the 19th century. The Abbey's close proximity to shore made it easily accessible for the millions of pilgrims who have flocked to here from its earliest days.

The Abbey's position at the top of Mont-Saint-Michel is said to best exemplify the way a feudal society was structured--God on top, followed by the abbey and monastery then the great halls, shops and housing with the fishing village and farmer's housing located outside of the walls. Today shops and housing have been replaced by restaurants and trinket peddlers with the fishing village completely obliterated but all of Mont-Saint-Michel remains an impressive sight none the less.

Go prepared to walk; once you reach the island itself, there are hundreds of steps to climb. Upon entering the walls you are greeted by restaurants and shops catering to the tourists. My advise is to skip those and escape up one of the narrow winding staircases. Going to the right will take you up onto the town's walls; left takes you deeper into the heart of the Mont. Here you can follow narrow (as in only accessible to one person at a time) walkways as you make your way up, up, and farther up towards the Abbey itself. When you make it to the large veranda of the Abbey you are rewarded with panoramic views of both land and the sea. From here you can not only see the village below but also watch the tides as they race in at break neck speeds flooding the plain below. From the top the touristy commercialism that you first encountered feels miles away. But when you are ready you can slowly wind you way back down the hill and all of its steps. If you are so inclined you can even dine at one of the restaurants and shop for your souvenirs before hopping the bus or walking back to your car. I prefer walking since the views along the way are pretty spectacular.

Free to walk through the Mont; admission to the Abbey is 9 Euro / adult, reduced rates for seniors, children and groups.

No cars are allowed on the island. Paid parking is available 2.5 kilometers away with free shuttle service until late at night. It is also possible to walk along a new pedestrian walkway. Any visit for Mont-Saint-Michel requires a lot of walking and a lot of stairs; this is not a handicapped accessible site.