The Ruins Of The Abbaye d' Aulne 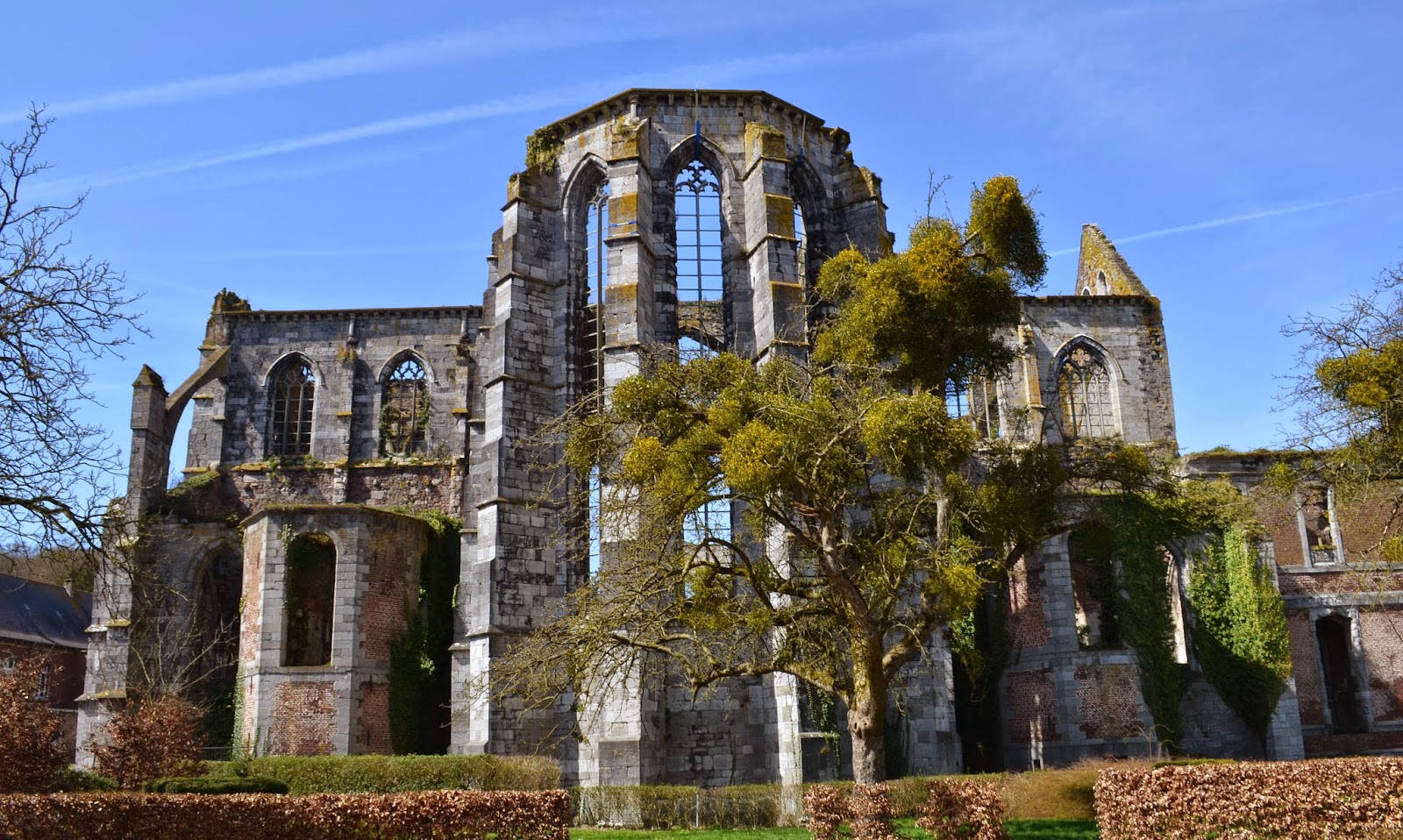 Blame it on my love of the Nancy Drew mystery series when I was a younger reader but for me, but many times, the ruins of a building are more beautiful than a well preserved building in its pristine state. As a Nancy Drew fan I used to fantasize about exploring the old granite ruins of castles and mansions the way Nancy and her friends did in their quest to solve the latest mystery. (Never mind that these fancy ruins were more apt to be in Europe than in the middle American suburban community Nancy called home; I loved them just the same). So it is no wonder than some of my favorite places to visit here in Europe are ruins. And of all the ruins I've seen, those of the Abbaye d' Aulne in Thuin, Belgium are by far one of my favorite. 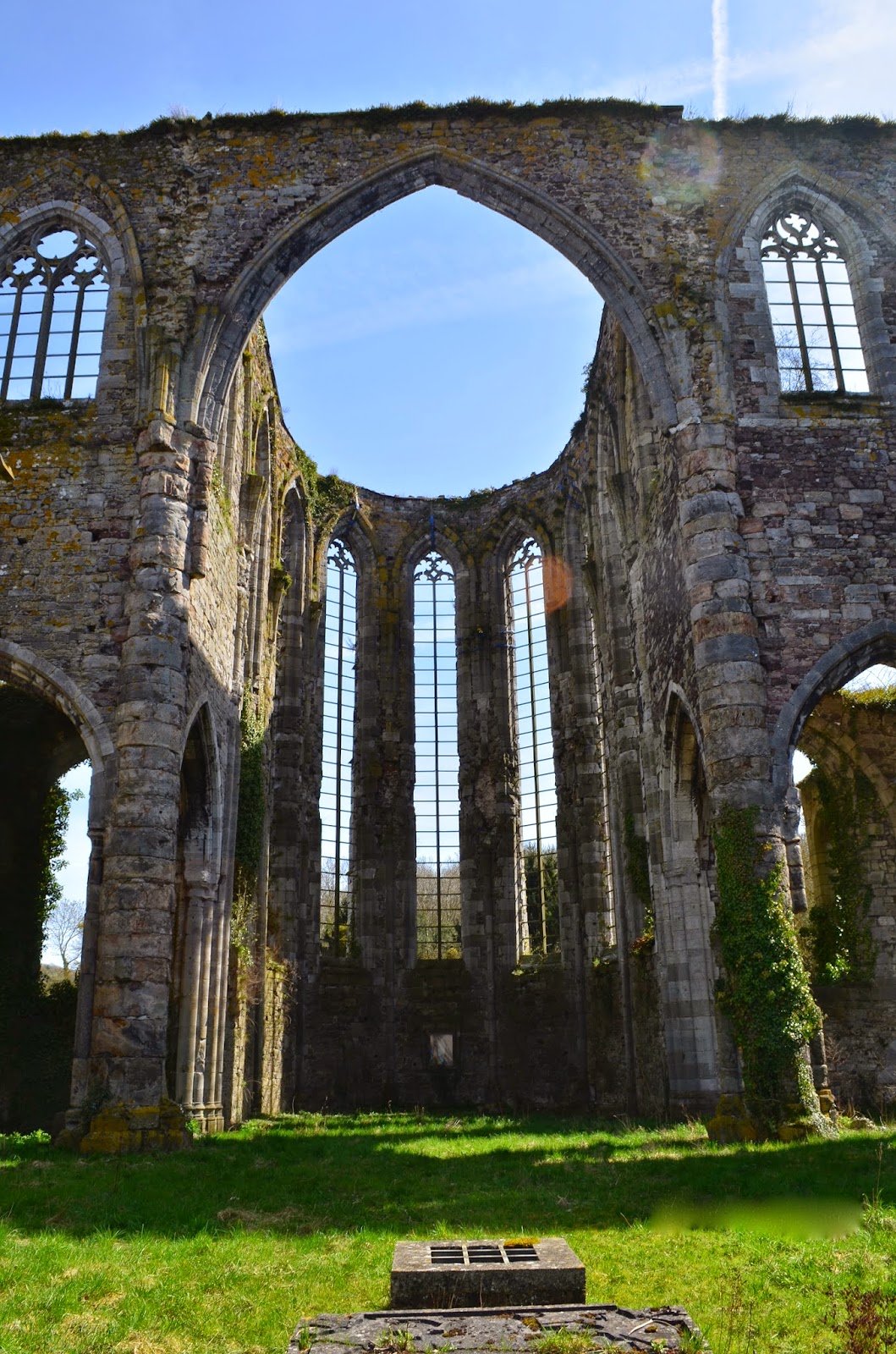 The abbey dates back to the 7th Century when it was founded by Landelin, the son of a wealthy noble family, on the banks of the Sambre River. Various tales have him being a failed monk prone to debauchery as well as an ordained priest who was charged by the Holy See to built abbeys and to evangelize in a part of the world that was not overly religious. By the 9th Century the abbey had expanded its footprint, rule of the abbey had changed hands under the leadership of St. Bernard to the Cistercians, a conservative sect who turned inward, focusing on a quiet life free of outside corrupt influences which had plagued the abbey in recent years.

The following centuries were a turbulent time in this part of the world. The abbey was invaded by the French army in 1538 and again in 1578 by Dutch Calvinists who were at war against Phillip II of Spain; on both occasions the monks were forced to flee to safety. Under the reign of King Louis XIV French army invaded the region once again in 1693, pillaging and looting from the abbey and surrounding villages and leaving destruction in their wake. A century later , in 1794 during the French Revolution, the abbey was burned because it was a symbol of religion. By the time of the fire, locals had repeatedly plundered it of many of its valuables. Within a year, however, the monks returned and began rebuilding, restoring the associated mill and brewery. But those parts of the abbey that weren't reconstructed underwent a "voluntary" deconstruction with bricks, stones and pavers from the former cloister and former palace being repurposed for other construction projects including the 1845 reconstruction of the Charleroi-Erquelines rail line. In 1855 construction of a new church begins on the site and by 1873 it is blessed. 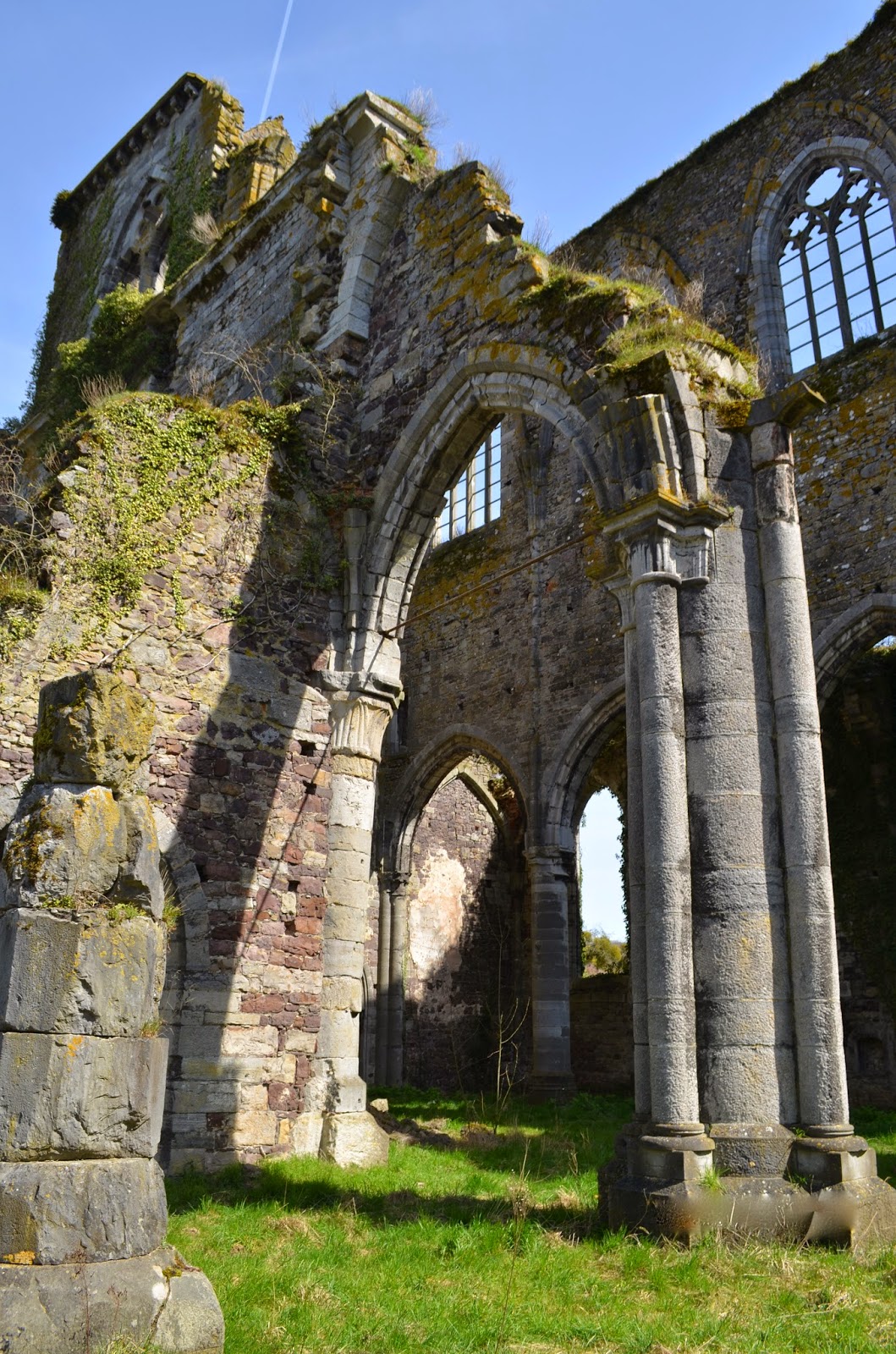 By the end of the century the remaining abbey facades had continued to deteriorate and posed such a  danger that the government stepped forward, partnering with the University of Ghent to restore the remaining buildings. The restoration work has continued through the years, pausing during the Second World War, with the abbey being recognized as a heritage site in 1991.

A visit today reveals the ongoing conservation work and excavation of the site. Parts of the ruins are cordoned off from visitors and as a heavily dented metal walkway indicates, the unrestored facade of the abbey is continuing to crumble. But there is still so much to see and for the most part, visitors can explore the many nooks and crannies of the old abbey. There is of course the "new' church and adjacent offices and event space that reminds me just how commercialized so many churches and abbeys have become. But the numbered placards (written only in French) explain the various parts of the original abbey grounds. The abbey grounds are sparse yet well cared for with the only adornment being carefully pruned bushes. Where a (presumably grand) fountain once stood there is now an empty basin. I've walked down the grand center aisle of many cathedrals but standing on the grass and pebble covered path at the foot of the former alter is a one of a kind experience. With the blue sky replacing the soaring vaulted ceilings and vines taking the place of ornate windows, you can get a real sense of how grand the cathedral once was. Windows are now pane-less, providing a clear view both inside and outside of buildings. Stubby stone columns are the only remnants of what had been the grand pillars supporting the apses' infrastructure yet it is easy to picture what they had looked like in their heyday.

For me, each view of the abbey was more magnificent than the last. Standing on the inside and looking up and out was breathtaking but walking the perimeter of the ruins and looking in was too. It was and still is, an architectural masterpiece which, for better or worse, has withstood invasions, wars, fire and "organized" looting and pillaging. Despite all of this, she still stands--rickety but she still stands. And yes, for a brief moment I closed my eyes and pretended that I was Nancy Drew on a mission to solve another mystery in an old abbey. 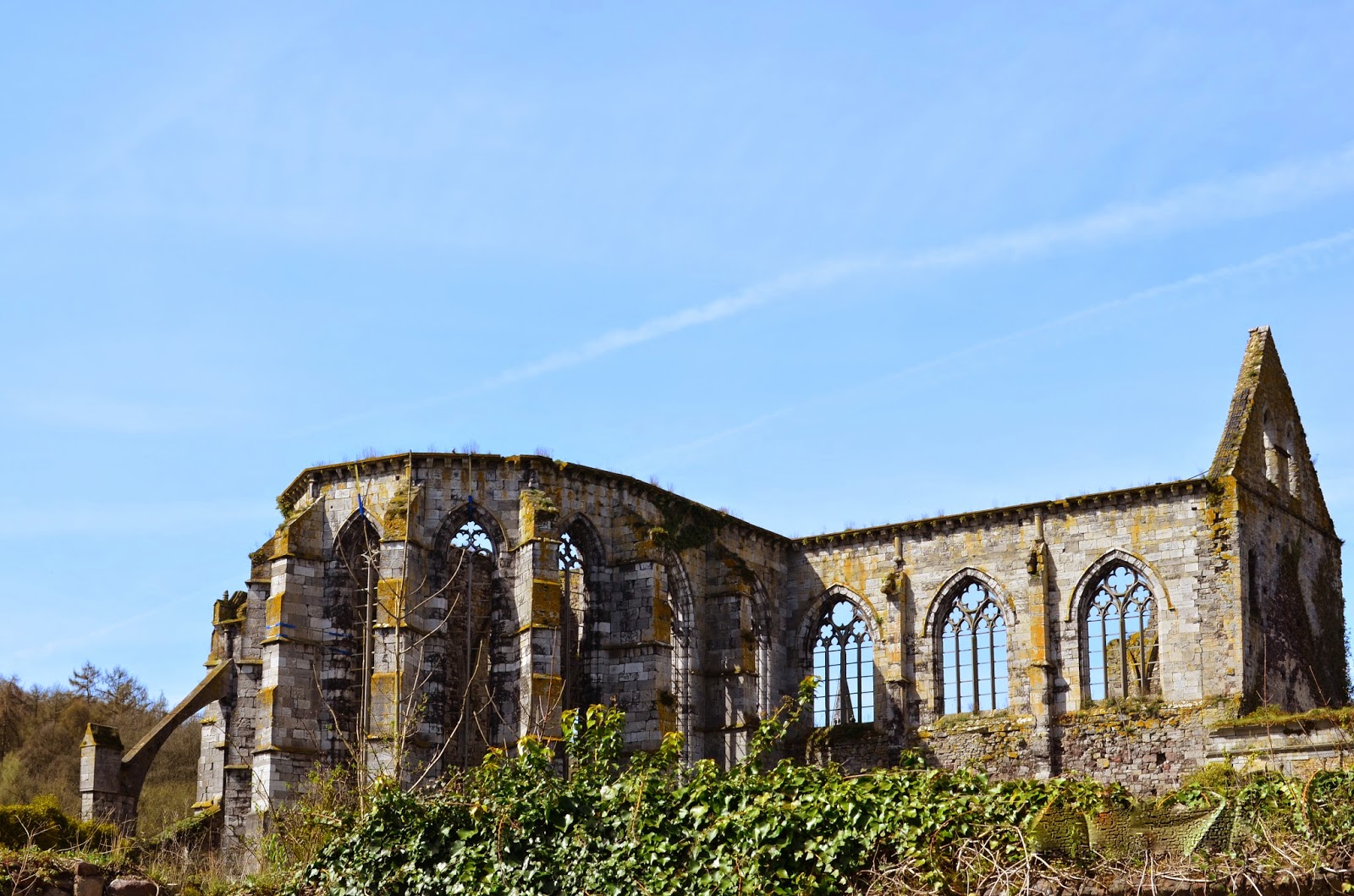