On The Trail Of Shaun The Sheep 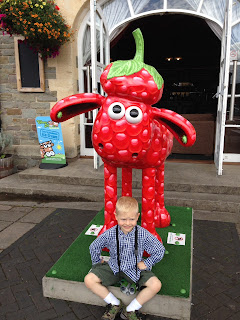 Sometimes you are simply in the right place at the right time. Case in point our recent trip to Cardiff, Wales. I had planned the vacation back in February, picking dates that worked around Glenn's office schedule. We didn't know what the weather would be and we weren't really sure what we wanted to see during our stay. It doesn't really matter because figuring things out as we go along is part of the adventure. And this time, we scored big when it came to finding the perfect activity.

Sidney is a huge fan of the Wallace and Gromit series of Shaun the Sheep. In fact, Glenn and I are too. For those who don't know, Shaun the Sheep is a British claymation character who along with his fellow sheep, live a jolly life on a British farm. Shaun appears in a series of short films, and he even has a full length feature movie that is playing in cinemas. Each film lacks words allowing the character's actions to portray what is happening. Sidney will laugh hysterically at the skits and I love it for its wholesome entertainment. And actually, we laugh too. We were a few weeks out from departing on vacation when I came across the mention of a Shaun the Sheep walking trail in England. I investigated and hit the motherlode when I discovered that this was taking place in Bristol, a mere 45 minute drive from where we were staying in Cardiff. I immediately knew this would be a much anticipated stop on our trip and it didn't disappoint.

The Shaun in the City trail is a fundraiser for the British non-profit Children in Hospitals which provides funding for the country's children's hospitals. Through this fundraiser artists design and paint a Shaun the Sheep which is then adopted by various businesses and organizations and put on display first in London and then in Bristol, the home of Wallace and Gromit. Once the trails have ended, the Shaun statues will be auctioned off to the highest bidders. The idea isn't necessarily unique as it has been done with various figures in cities across the globe, but for Shaun fans, it is a whole lot of fun. 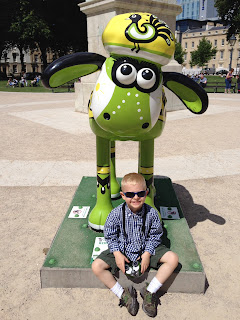 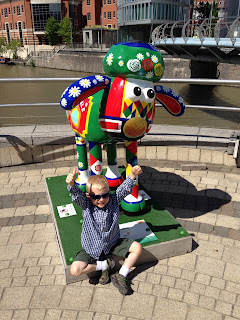 So on a rare sunny day we found ourselves in the port city of Bristol hunting down Shaun statues. With the assistance of an app we followed not one or two but three separate trails looking for Shaun. Our first trail took us along the city's colorful waterfront where Shauns were hidden amongst the boats, piers and parks. Each sheep was a different color and carried a different theme. They were all beautiful and it impossible to pick a favorite. The beautiful Bristol Cathedral had both a Shaun outside but a smaller version inside. As we wandered through the church I noticed tiny wooly stuffed sheep peeking out from various nooks and crannies. This became a second sheep hunt as we tried to find all of the ones hidden in this solemn place. Next we went deeper in to the city through historic neighborhoods filled with brick houses, churches and green parks. Our final trail took us through a more modern shopping district where Shaun was hiding in shopping malls and pedestrian districts. As we went along we ticked off our find on our app, snapped a picture with each sheep and took in our surroundings. And we weren't the only ones hunting Shaun; at each statue a small cluster of like minded people were doing the same thing. 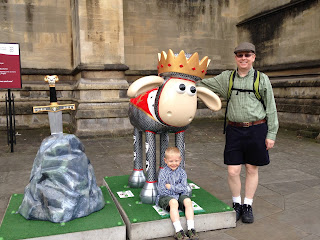 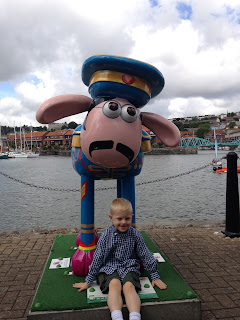 Bristol is not a city we would have visited if it wasn't for Shaun the Sheep. A college and industrial town, it is simultaneously gritty and bohemian, modern and up and coming. Over the course of the day we walked 20 kilometers and saw things we never would have other wise. It was fun and a great way to get in some exercise while discovering the city's hidden treasures. Excluding the miniature sheep at the Cathedral, we shopped 31 sheep over the course of the day. And it all benefitted a great cause. (Which we contributed to by visiting the gift shop across from our final sheep at the local children's hospital). So if your in the area in the next few weeks, stop by to find a sheep or two. And even if you miss it, take a swing through Bristol if you get a chance. Its a fun place to spend the day.