Rising To The Occasion 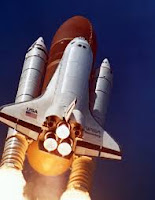 It is often said that children will rise to the highest denominator yet sink to the lowest one. I've seen this myself with my own son; when he was the youngest child on his soccer team he played with all his heart and out shone the older children yet when he himself was the oldest, his efforts were sub par at best. On the playground playing with older children the bloodiest skinned knee doesn't even illicit a whimper yet the smallest bruise while playing with younger children has him crying to no end. This pattern has been on going for some time and I dare say, as we wrap up our first week of school, it is continuing.

Because of the small student body size (52 students spread across eight grades), as a first grader Sidney shares a class with the second grade. This results in an intimate class size that is still smaller than most single grade classes. This also means that he is interacting with older children on a regular basis. And as his history has shown, this is where he really shines. Actually his is glowing.

It seems as though my little boy has grown up over night. He is so proud of being a first grader that this identity has become his introductory mantra to everyone he meets. Whether it is in the grocery store, on the playground or on the street talking to a neighbor, Sidney is quick to tell everyone that he is now a "first grader at the Canadian school". In the morning he tells me that it is important to wear clean clothes to school because no one wants to sit next to someone who is dirty. On our walk to school I am informed that if you see trash on the street or the playground you need to pick it up and place it in the trash can because helping to keep the environment clean is the right thing to do. Sidney has adopted his teacher's favorite adjective "spectacular" as his own and uses the word to describe each activity. French class is spectacular as are math and music classes. Going to the playground is still his favorite school activity but it is now called recess. Each student has been given a sketch book to keep track of their art and they have drawn three pictures of themselves which are called "selfies". All of the classes meet together in the "maple leaf room" to discuss all school activities. Each of these activities is reported to me in thorough detail at the end of each school day. They are then repeated over dinner with the occasional additional detail being added in. All of this comes from the same child who upon being picked up from camp only reported that his day was good and he didn't remember what they did. I'm certainly not complaining but where has this instantaneous maturity come from? It is like he has become a whole new child overnight. I'll take it.

But then there is the bus. We had signed Sidney up to take the bus on the off chance that I didn't need to be on base in either the morning or afternoon. After the first day of school Sidney told me that he might want to ride the bus and after the second day he told me that he really wanted to ride the bus because according to him "first graders don't need their mothers to bring them to school". Really? We've talked about it and decided that starting next week he can take the bus home on the days when he doesn't have after school activities. In the mean time Sidney no longer holds my hand when we are walking up the street to the school and I am no longer allowed to cross the street with him to reach the school. Instead he gives me a wave and I watch while he crosses the road with the assistance of the crossing guard. Yes, my baby is growing up.
Posted by Zosia at 11:52