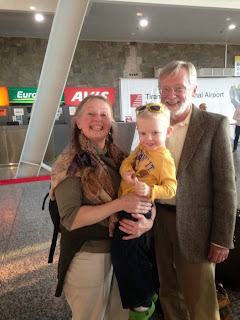 Two weeks ago Sidney and I went to the airport to pick up his Mimi and Grandpa (my parents).  To say he was excited puts it mildly.  As we walked across the parking lot and into the terminal Sidney told me that while talking to them on the computer (via Skype) is nice you can't hug the computer and all he wanted to do was hug Mimi and Grandpa for real.  And that is exactly what he did the moment they appeared through the security door.  After two years my little boy was finally able to hug his grandparents and he was beyond ecstatic.  (And judging by the picture on the left I'd say the feelings were mutual).  As they settled in Sidney quickly began calling them his "friends" and was their constant shadow wanting to show them his toys, books, and everything about his Albanian life. If one of them left the room Sidney sought them out but then again his grandfather did the same thing when Sidney disappeared for even the shortest amount of time.  It was heartwarming and at the same time caused me to question our own lifestyle choices.  Is it fair, that by choosing to live overseas, we're separating Sidney from his blood family and both sets of grandparents from their only grandchild?
We've tried hard to create a strong and supportive circle around Sidney.  I do think that it being "just the three of us" (his words) living so far away from family and friends we are a stronger family unit than we would have been if we were living back in the States.  Here in Albania we don't have cousins, aunts, uncles, or grandparents for immediate emotional or physical support so by default, we've cobbled together our own makeshift support network.  (But then again, Glenn and I have such small nuclear families and Sidney doesn't have any first cousins at all so maybe it wouldn't be so different if we were stateside.....).  Sidney's nanny and her husband are his "Albanian grandparents" and we do Skype with both sets of his real grandparents whenever possible.  These conversations are interactive but I know they aren't a substitute for the real thing.  While I know Sidney is having experiences that our living in the U.S. would never allow him to have, I still wonder whether our living overseas is robbing our son of an important part of his developmental process and of his childhood.
There is a phrase in the ex-pat community that describes children who are raised outside of their home country.  There is an ever growing body of literature and research that talks about these "third culture kids" or "global nomads".  Studies show that these children, raised in cultures outside of their own, have stronger family relationships, are more resilient, and have a better knack for learning foreign languages than children raised in a single culture.  Using my own little boy as an example, I completely agree with all of these findings.  The child is quick to invite a new child to play on the playground, is fluent in Albanian, and can recite the most minute details of flying internationally as if it is second nature to him.  However, this doesn't mean life is easier for these TCK children.  Constant changes, whether it be new houses, new schools, or new friends, are never easy.  It is never fun being the new kid and being the new kid every few years can take its toll.  Anxiety, a sense of not having roots, or a lack of identity are all traits that can plague a TCK.  Then, as demonstrated by my original concern, there is the lack of connection to one's own extended family.  Is knowing one's grandparents, aunts, and uncles exclusively through Internet communications enough for a growing child?  (I know that technology has made it so much easier to maintain family bonds than it was just a generation ago but there is no substitute for in-person interactions).   And what happens when these third culture kids try to assimilate back into their own communities of origin?
These are all issues I worry about as we prepare to pack up again and move to a new foreign country where we will spend an additional three years.  With much resistance, we've begun the conversation about new houses, schools, and friends with Sidney and yet I know this won't be the last time we discuss this with him during his childhood.  It is a way of life that we have chosen and are now imposing on our son.  When we (finally?) return to the States, Sidney will be over seven years old, having spent all but the first year of his life living overseas, and know nothing of his country of origin.  He'll be an English, Albanian, and French speaking child who has never played on an American playground or run barefoot through a grass covered backyard, never experienced waking up Christmas morning surrounded by his grandparents, and never celebrated a birthday at Chuck-E-Cheese (well, maybe it won't be all bad after all...).  His grandparents will be that much older and will have missed out on experiencing so many of his childhood milestones that they might have been able to witness firsthand had we lived closer.  But Sidney will have travelled throughout most, if not all of the European countries, have international friends, and have made memories that he will be able to carry with him for the rest of his life. But upon returning to the U.S. Sidney will essentially be a foreigner in his own land and I can't decide if this is good, bad, or perhaps a little bit of both.
In the meantime I'm going to cherish the memory of that airport greeting and hope it isn't another two years before we get to experience it again.
Posted by Zosia at 15:19