Yesterday was a busy and trying day.  During my lunch break I ran over to a local restaurant where we had dined over the weekend in search of an elusive toy airplane (Sidney's favorite), which had gone missing.  The restaurant staff was concerned when they couldn't find it but I dismissed it to our own carelessness at not double checking that we had everything before we left.  (I later found out that Sidney had hidden the said toy in a drawer for the weekend yet had plead innocent as to not knowing where it was).  After a somewhat hectic day at work I dashed home to pick up Sidney then drove through a log jam of blocked off streets (courtesy of the president of Greece's visit to Tirana) to pick my parents up at the airport.  Sidney was beside himself with excitement at the prospect of seeing Mimi and Grandpa for the first time in two years.  As he said, you can talk to them on the computer (Skype) but you just can't hug them and that was what he wanted to do.  And that is just what he did when he saw them.  It was one of those moments that just makes the hassles worth it.  We made our way back through even more traffic as Sidney happily chatted away about everything under the sun.  Trains, airplanes, the weather, food; you name it and it was a topic of conversation during our ride.  Glenn and I had a reception to attend last night so after a few minutes at home during which my parents got settled in, us giving them the low down on the dos and don'ts of Sidney, and my putting the finishing touches on their dinner, we got dressed and headed back out with Sidney under the watchful eyes of his jet lagged grandparents.

We returned home two hours later to a hyperactive child and grandparents who were both exhausted and in awe of a soon-to-be four year old's endless supply of energy.  In the midst of the recap of the evening's activities it was mentioned that Sidney may or may not have flung a napkin ring over the balcony and into the yard.  I jumped to attention at this and sure enough found that my sterling silver napkin ring, part of matching engraved set that Glenn had given me for our first wedding anniversary, was indeed missing.  Sidney was coy about the whole affair, he said that maybe he had thrown it but continued on by saying that it had made a nice noise when he threw it.  Upon hearing this I was sure he had thrown it and still dressed in my formal attire, I grabbed a flashlight and searched our yard --and the street surrounding our yard for good measure-- but struck out.  I returned inside feeling saddened by the loss.  When Glenn learned what happened he went back outside and searched a larger perimeter of the street and low and behold, he found it.  It had been crushed by a passing vehicle, but we had it back in our possession.

Holding the battered and weathered napkin ring forlornly in my hands, I sat down and kicked my shoes off of my aching feet.  My mother immediately asked me when was the last time I had treated myself to a pedicure.  Glancing at my chipped toenails I admitted that it had been years and that I had resorted to splashing coats of nail polish on my toes myself whenever the need arose.  Looking closer at my feet then back to my napkin ring I realized that in an odd way they actually resembled one another and symbolized so much of what I was feeling.

My napkin ring started out perfectly round and shiny with my initials carefully engraved on its smooth surface.  Over time it began to tarnish, as silver is apt to do, but it remained as solid as the day I received it.  It was indestructible, or so I thought.  Last night it sat in my hand as a tired, warped, and nicked version of what it had once been.  The shine was gone and despite my efforts I was unable to maneuver it back to its original shape.  Over two years ago we arrived in Albania hopeful, energized and ready to take on the world.  We were up for anything, or so we thought.  The past twenty-nine months have been trying and have worn me down.  Albania is a beautifully frustrating country where even the simplest tasks often become arduous chores.  I've felt pulled in too many directions at once- raising a precocious pre-schooler, working part time (which actually is my tiny piece of sanity on most days), being the perfect hostess on demand, being pushed outside of my comfort zone on a regular basis, and generally feeling rushed.  I've been living the past two years on fast forward and I am tired.  And battered.  As the condition of my feet can attest to, I've been putting everything ahead of myself and my own needs.  Like my napkin ring I am tarnished and worn. 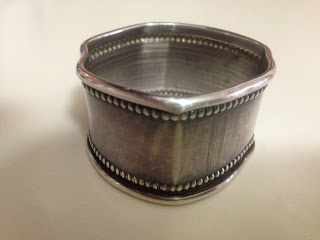 With some effort, Glenn was able to push and bend my napkin ring into something that resembles its original shape. With a little silver polish it will once again be shiny.  While no longer a perfect circle, it is serviceable and can once again hold a napkin.  While battle worn, much like me, it carries on.  I won't go so far as to say I'm going to go out and get a pedicure, but I am going to treat myself to a proper at-home foot treatment and a little pampering.  Heck, I might even break out a new color of nail polish.  After all, the annual Marine Corp Ball is this weekend and these feet need to be ready for some dancing.
Posted by Zosia at 13:03