Rules Of The Road 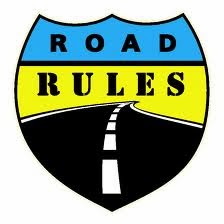 Traffic fatalities are a problem in Albania.  According to the Albanian Ministry of Health, traffic accidents are one of the leading causes of death in this tiny Balkan country.  Here, victims of traffic accidents account for the highest percentage of emergency room usage with incidents of traffic related accidents being 3.5% higher here than they are in the rest of Eastern and Central Europe and aren't showing any signs of decreasing.  The U.S. Department of State warns American citizens of the dangers of Albanian roads both as a driver and as a pedestrian (since hit and run incidents are all too common).  Even in conversations with Albanians I've noticed a reluctant acceptance as though traffic fatalities are just a way of life here.  We hear of fatalities in the news, communities mourn and bury their dead, then life and driving habits seem to continue on a normal.  More likely than not, people will cite the weather or conditions of the roads as the cause of the problem (yes, they are bad) rather than the speeding and distracted driver, the lack of safe vehicles, or the unsecured passengers.  Just this past week the death of a sitting member of Parliament in a traffic accident has pushed this issue back into the news.  One can only hope that such a high level death will be bring about the changes that are needed to put a halt to this easily preventable epidemic.

But the high number of Albanian traffic fatalities can't be attributed to a lack of laws.  In fact, according to information provided by the World Health Organization, Albania has a rather high number of laws on the books that should in fact be reducing the number of traffic accidents and fatalities.  National laws regarding speeding, driving under the influence of alcohol or drugs, the use of child safety seats, and seat belt use for both drivers and passengers are all readily cited as existing in the law books.  The problem, one must surmise, lies in the enforcement, or lack there of, of these laws.  (Actually, Albanians and Albanian Parliament seem to love passing laws; it is enforcing them that becomes the problem.  Albanians are quick to justify actions as there being a law about the said issue yet rarely does anyone say that these said laws are ever enforced).

In the wake of this week's high profile fatality, police officials are stepping forward with statements promising both increased enforcement and increased education.  (This sounds promising, at least).  In fact, it appears that the government has slowly been edging in this direction.  A few weeks ago the police announced that they would now be arresting drunk drivers on the spot rather than issuing them tickets and allowing them to go on their merry way.  Yes, you read that correctly.  While this sounds like a logical and long over due measure, it begs the question as to whether there is a real understanding of the dangers of drinking and driving.  How does issuing a fine yet allowing an inebriated driver to remain behind the wheel make the streets safer?

The lack of enforcement can't be due to a lack of police presence on the streets.  Blue uniform clad officers holding traffic lolly pops are a regular sight all most of Albania's roads.  I often see them standing in the center of intersections holding their citation books and directing traffic with frantic movements of their sticks.  But as I see cars packed with too many passengers speed by them, others drive against the flow of traffic, and still more drivers create new lanes of traffic because there is space to do so, I wonder what laws these officers are actually enforcing.  I have witnessed what appears to be an increase in enforcement lately---vehicles driving the wrong way during our short morning commute are getting pulled over more often-- but somehow when I see the arguments that ensure then the police officer simply shrug as the irate driver pulls away, I wonder if this is really enough.

So let's discuss the education component of all this.  There is talk of creating public service announcements to educate drivers as to what traffic signs and signals mean, the purposes of solid lines down the middle of the street, and why you can't just drive and park on sidewalks or any other open space you encounter.  Albania certainly isn't lacking for drivers education schools--you see old Mercedes toting "auto skolle" signs plying all of the country's roads and highways--so it begs the question of what these students are actually learning in class.  Apparently it isn't the importance of obeying speed limits and road rules.  Drivers are quick to use their blinkers before turning or coming into oncoming traffic.  However, in doing so it appears that they think that looking both ways (or either way) is no longer necessary.  (Never making eye contact with other drivers seems to be the one "traffic rule" that everyone obeys).  Drivers here seem to think that if there is space in the road (or sidewalk) they are entitled to drive there even if it means driving into on coming traffic or endangering everyone around them.  All too often I've seen cars driving the wrong way in a traffic circle or into the oncoming lane of a divided highway simply because it appears to be the shortest route between where the car is coming from and where it is heading.  Our own single Albanian traffic accident occurred when the driver of a van backed into us and justified his actions to the police with the excuse that he backed down the street every day.  Since our car didn't suffer any damage the van driver was sent on his way and we were told we should have used our car horn to warn him of our presence.  Really?  I guess the lesson in all of this was that we need to get out of the way of all vehicles since everyone, regardless of the direction in which they are moving, has the right of way.  Does all of this happen because drivers don't know or do they simply not care?

I can count on one hand the number of times I've seen seat belts being worn and more often than not the number of bodies packed into a vehicle far exceeds the number of seats.  Child safety seats are now readily available in Tirana's stores yet I've been told that they take up too much space and wouldn't allow as many passengers to be able to fit into the vehicle.  Instead I regularly see infants and toddlers (sometimes multiple children) sitting on the laps of front seat passengers and even the drivers themselves.  Since the number of vehicles driving around with head indentations on their windshields isn't sending a clear enough message, perhaps there needs to be an education campaign to inform drivers about the basic laws of physics and why it is dangerous to have unsecured passengers in the vehicle.

The entire traffic situation begs the question of which comes first, the chicken or the egg.  Does enforcement (and I mean real enforcement) of the existing laws come first in an attempt to make it safer for everyone in Albanian to move around the country?  Or does the country first undertake a massive education campaign to teach drivers what they need to know in order to navigate the roads safely? Or do both activities take place simultaneously?  How can drivers be held accountable for both their actions and the laws that as drivers, they should know?  In a country that is all about personal responsibility and accountability, doesn't each and every driver have the responsibility to both know and obey the law?