Believing In The Magic 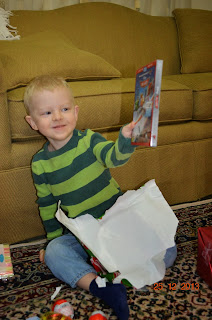 Yesterday, more than ever before, I came to understand the true joy that comes from observing something from a child's perspective.  As a mother, the weeks and days leading up to Christmas are over scheduled, chaotic, and anything but relaxing.  (Note to parents everywhere.....no matter how pretty it may look, buying the glitter covered wrapping paper is never a good idea.  However, it is a very good idea to have an extra stash of tape on hand).  But seeing Sidney's excitement over the prospect of Santa's visit followed by the look on his face when he realized that Santa did indeed come makes every moment of the chaos worth it.

This was a Christmas of firsts for us.  Primarily, this was the first Christmas that we actually celebrated in our own home.  When we were stateside, holidays were split between our own two families meaning we saw more of Interstate 95 than we did our Christmas tree.  Our previous two Albanian Christmases involved hotel rooms in other cities.  While it was wonderful to experience Christmas markets, live nativity scenes and outdoor concerts, these holidays just never truly felt like Christmas.  This year, sitting in front of our own tree in the comfort of our own home, it finally did.

And most importantly, this year, at age four, Sidney was an active participant in so many of the activities leading up to Christmas itself.  Opening each box on his chocolate filled advent calendar became a daily ritual in the days leading up to yesterday.  Sidney helped decorate the tree and hang the lights, squealing with excitement when they finally illuminated the room.  With each decoration that went on the tree I was able to share my own childhood Christmas memories with him.  Christmas Eve found the two of us preparing dinner together then plotting Santa's snack.  When I first suggested to Sidney that he might want to leave a snack for Santa and his reindeer, he got all serious.  Sidney decided that just any plate wouldn't do and instead selected a holiday themed one from the cabinet.  When I asked him what snack Santa would like, he pondered the question for some time before stating "spicy chips" (Sidney's personal favorite at the moment).  Over the course of the evening the snack menu changed until Sidney finally settled on chocolate cookies for Santa and a carrot for his reindeer.  His excitement at selecting each cookie before carefully putting it on the plate was simply contagious.  Bedtime, framed around needing to go to sleep before Santa arrived, complete with a reading of Twas the Night Before Christmas and the spotting of Santa's sleigh in the distance (a.k.a. the light of a passing airplane), only added to the anticipation of what was to come. 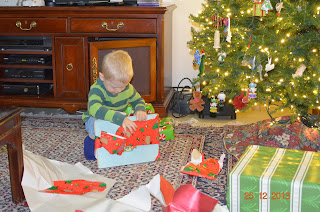 And then we had Christmas morning itself.  Sidney's eyes lit up at the sight of his overflowing stocking and the pile of presents under the tree.  He took the task of unwrapping seriously and the meticulous care he took in opening each item item was in complete contrast to the excitement of discovering what was inside.  Books and a new winter jacket were met with the same level of excitement as the make your own sandwich kit and the toy aircraft carrier.  Throughout it all Sidney kept repeating that Santa was so nice for bringing him presents.  Hearing and seeing his excitement and witnessing his unparalleled belief in Santa made all of the chaos leading up to Christmas worth it.  And, it made me a believer in the magic of Mr. Claus.
Posted by Zosia at 08:00