Going Out With A Bang

Today is New Year's Eve; the very last day and hours of the year 2013. As I sit here typing I am wondering exactly where the year went since it feels like I was just writing the same thing about 2012.  Time sure flies...............but back to the day at hand.
Whereas Christmas is a relatively new celebration in Albania, New Year celebrations are a very big deal here.  Family gatherings, food, and fireworks are the hallmark of an Albanian New Year's celebration and if the recent doings are any indication, this year's festivities are going to be more "spectacular" than last.  Similar to the last two weeks of August when Albanians abroad return to their motherland en mass, Albanians have been once again returning in large numbers.  You can see it on the streets, in the stores, and in the restaurants and cafes.  In many respects Albania and Albanians have a lot to celebrate this year so this year's celebration feels like it will be bigger than ever.
Flying back from Rome on Sunday our plane was full.  So full in fact, that passengers were having to hold their carry on luggage on their laps or stow suitcases under their feet---not under their seats but under their feet.  (Don't even get me started on the safety aspect of all of this Alitalia).  The airport itself was crowded in a way I have never seen before.  Everyone jokes that in Albania if someone is arriving on an airplane the entire extended family goes to greet them and this appeared to be the case.  Talk about a mob scene; there were men, women, and children everywhere.  The crowds extended to the grocery stores yesterday where the scene in the local Carrefour was reminiscent of American stores on Black Friday.  The produce section of the store was such chaos that at times, I feared for my own safety.  Hoards of people were jostling and pushing their way through the aisles in such a manner that I cut my shopping excursion short and went home.  While there were items I needed, I just didn't have the stamina to jump into the fray.  (On a semi-related note, I found it ironic that two women in Northern Virginia are now wanted for assaulting a fellow shopper after an altercation ensured over cutting in line at a shopping mall.  In Albania, every shopping excursion is a contact activity with pushing, shoving, and jostling to the head of the "line" being the norm).
And then we have the fireworks......Fireworks, like so many other things in Albania, are not regulated meaning anyone and everyone has easy access to these potentially dangerous explosives.  Fireworks are the customary conclusion to summer wedding celebrations then they make a reappearance at New Year's.  This year, more so than in previous ones, we have noticed their reappearance in the weeks leading up to the end of the year.  Back in mid November, the neighborhood youth, (or the bored and disenfranchised young men a.k.a. thugs), began shooting off firecrackers up and down our street.  A few were small pops but increasingly they have been loud and smoky explosions. On more than one occasion exploding firecrackers have been tossed against and over our wall, filling our yard with plumes of sulfuric smoke.  These explosions have become such a common occurrence that I almost don't notice them.  Almost that is, since their deafening noise when they hit too close to our house is enough to wake Sidney from his sleep and prevent his parents from falling asleep.
So this brings us to today and tonight.  The young men are already at it and shooting off firecrackers.  They even threw a few in my directions as I walked home today. This time they have some young (8-10 year old) children tagging along behind them whom they send in to investigate the firecrackers when they doesn't explode.  I've gotten to the point where I'm afraid to look outside lest I see a child or adult get hurt by an explosion.  (I'm not sure what is more irritating, kids throwing firecrackers or grown men doing it).  As day turns to night I'm sure it is going to be an ever increasing chaotic scene on our street.  Last year a bonfire made of trash and debris was lit in the middle of the street and as I saw the makings of one when I returned home earlier, that is something else we can look forward to this evening.  If last year is any indication, as midnight approaches we are likely to see just as many red chaser rounds as actual fireworks.  Yes, the shooting of guns into the air is often a substitute for launching fireworks.  This is one of the many reasons we are advised to lay low and avoid crowds.
As has become our tradition here in Albania, my family will do just that.  We'll hang out drinking bubbly and snacking on nibblies before bundling up and watching the loud and colorful spectacle unfold from the safety of our covered third floor balcony.  Once again we'll watch the grandmother living across the street climb to her rooftop to shoot off her family's fireworks and we'll hope that the residents of the house to our left shoot theirs away from us instead of in our direction.  (Being a two story house, their roof puts our third floor directly in the line of fire for whatever they are throwing).  Shortly after midnight the spectacle will (hopefully) end and the smoke will mostly clear by morning.  And when we awake tomorrow it will be 2014; a new year with new opportunities and challenges.  Bring it on.
And just so you can see what I am talking about, below are a few pictures (as viewed from our balcony) from the celebrations of previous years: 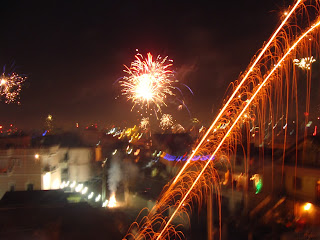 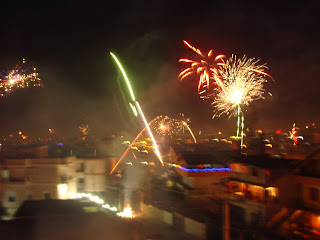 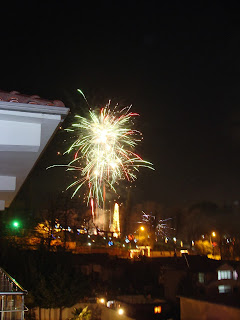