Getting To Know La Doudou

Belgians love festivals and the annual festival to end all festivals just concluded a week long run here in Mons.  The Ducasse de Mons, more commonly known as Le Doudou, it is recognized as a Masterpiece of Oral and Tangible Heritage of Humanity. Its history dates back to the Middle Ages and today mixes its origins with a modern day week long party where thousands of people flood the streets of Mons. There are processionals and ceremonies, concerts of classical, military and contemporary music, food and drinks and the spectacle of Saint George taking on the dragon.

The La Ducasse in Mons found its origins in 1349 when the city found itself suffering from the plague. Officials decided to simultaneously parade the shrine of Waltrude from Mons and the shrine of her husband Vincent Madelgarus from Soignes to a meeting place in the village of Casteau. It is said that a miracle happened with their meeting and the plague was eradicated from the area. In 1380 Saint George entered the festival with a reenactment of his slaying of the dragon.  Today these traditions are carried on annually on Trinity Sunday through the reenactment of the processions and the battle between Saint George, representing good and the dragon, representing evil. There is ceremony and costumes with the maneuvering of the shrine up and down Mons' cobblestone streets. And of course the highlight of the festivities is the reenactment of Saint George's battle with the dragon. Good luck is said to come to those who are able to grab the hairs from the whipping tail of the dragon and hundreds of people always take that challenge. From what I have seen, most of the people making a grab for the tail are young men (probably influenced by a beer or two). There is even a smaller and calmer reenactment of the battle with the dragon is held the following Sunday for where children are the participants.

Friends had told us about the festival months before it actually took place. Living in the center of the city we realized that we would have a front seat view of the festivities and thought the festival would be fun. But then American neighbors who have been living in Mons for some time warned us about the perils of living so close to the center of the action. Streets would be blocked off, the noise would be unbearable at times and we had to be prepared to not be able to get our car in and out of our parking area on several occasions since our garage is not only on the parade route but directly across the street from the church where many of the celebrations take place. So we were both warned and prepared.

In the days leading up to the first night of celebrations no parking signs started popping up on every street in our neighborhood. Security personnel at SHAPE issued warnings about how to stay safe during the festivities. City maintenance workers took to the street whitewashing over graffiti and power washing the cobblestones. Restaurants and cafes opened their doors and pulled kegs of beer onto the streets. An early Friday afternoon walk through the Grand Place revealed that the party had already begun with music blaring young people drinking and dancing in the midday sun. We wisely decided to not partake in the evening's festivities but perhaps view the Sunday morning parade. All weekend the streets were filled with the sounds of yelling, music and general revelry. Four in the morning was particularly noisy since this was the hour when the bars briefly closed and drunk patrons were pushed out onto the streets. Shortly after the street sweepers would follow in their wake and then the power washers would come by again. And then it would start all over again.

I've seen pictures of the crowds and festivities and am glad we stayed away from most of the events. Perhaps twenty years ago we would have put ourselves in the middle of the festivities. Being older and wiser now, with a small child, we picked our events carefully. We watched the grand finale fireworks from our bedroom windows. They were indeed one of the most spectacular lighting shows I have seen and I was able to enjoy them, without the crowds, while wearing my pajamas. This past Sunday we joined the albeit smaller crowds on the Grand Place for the children's version of St. George and the Dragon. It was still crowded but from his perch on Glenn's shoulder's, Sidney was able to see most of the spectacle. We watched it live on the large screen that was suspended over the plaza. 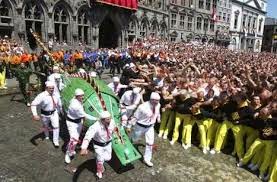 La Doudou takes place every year so we have two more opportunities to partake in the festivities if we want. Will we? I'm not sure. At the moment the neighborhood still holds the lingering smell of stale beer and urine and I'm not sure I want to put myself and my family in the center of that. On the other hand, it is a well known and spectacular event whose history runs deep. (And as a history nut, I love that aspect of La Doudou). Perhaps our best bet is befriending someone who owns one of those apartments that is truly on the plaza (maybe we should have rented one of those). Or we could brave the crowds on the ground. We have a year to figure it all out.