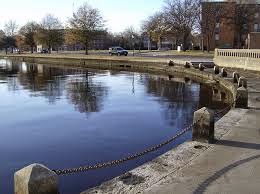 A recent Washington Post article left me simply feeling sad. The article was about our old home city of Norfolk, Virginia and focused on the growing flooding problem in the city. Norfolk is a city surrounded by water and is low lying with many places being barely above sea level. It stands to reason that the area floods; I remember the flooding all too well.While hurricanes, tropical storms or Northeasters were reason to worry, a simple heavy afternoon rain storm was enough to cause the city's waterways to overflow, underpasses to flood and streets to become rivers. I quickly became adept at figuring out which streets were most prone to flooding and learned how to safely navigate from my downtown office to my house when the streets were flooded. But not everyone was so savvy. During our years in Norfolk I lost track of the number of times I saw cars floating in flooded underpasses. Yes, even under the best of conditions water was everywhere. It was simultaneously beautiful and scary but reminded me that despite all of our modern technology, Mother Nature was really in control.

Although we left Norfolk in 2010 I knew the water problem was only getting worse but I didn't realize just how quickly the problem was growing. And then I saw the article. Norfolk's water problems are two fold. First, normal tides in Hampton Roads have risen an average of 1 1/2 feet over the past century, reflecting an increase that is higher than the rest of the East Coast. (But the entire East Coast has been designated as a sea level rise hot spot). Secondly, Norfolk is actually sinking. Yes, sinking. 35 million years ago a meteor hit the mouth of the Chesapeake Bay creating a crater that is now slowly consuming Norfolk. Simply put, all of this water does not bode well for a city whose existence has always revolved around the sea.

But the Post article struck a particular chord with me when I saw the Reverend of the church we were married in talking about how the flooding problem was forcing her church to seek a new physical home. This made my heart lurch. The beautiful old Unitarian Universalist Church sits on the edge of the Hague, a basin of water abutting what I consider to be the most beautiful part of the city. The thought of this church, which holds such special memories for me, being flooded out was simply so sad. Water was a problem when we got married and I feared flooding on our rainy wedding day but fortunately for us, on that April day the water never overflowed the banks like I had seen it do so many times before.

Despite the vocal minority who still denies its existence, global warming is at the root of these water problems. Throwing a lot of money at the problem may offer short term solutions for today's Norfolk residents but it won't stop the ever increasing presence of the rising water. I don't want to sound like a fatalist but it would appear that there really isn't a long term solution to the problem. Mother Nature really is in charge. And while I believe her force is awe inspiring this dilemma makes me sad. Very very sad.