A Hoppy Weekend In Poperinge

Most days it is pretty cool to be living in the center of Mons. After all, the Grand Place is literally in our back yard meaning we are mere steps away from the weekly markets, numerous museums, local festivals year around and more cafes and restaurants than we could ever eat at. But I said most days. Some days, or weekends, the ensuing crowds and rowdiness associated with the afore mentioned festivals are a reason to flee rather than stay. We learned our lesson during last year's Dou Dou festival meant closed streets, piles of discarded cups and cans and drunken crowds so large that that city workers came down our street at three in the morning armed with street vacuums and power washers. With this in mind we made plans to get out of town during this year's festival and as such, spent the past weekend exploring the Belgian town of Poperinge. 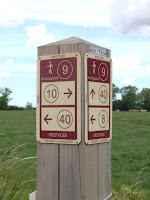 Our goal was to simply get out of town and we chose Poperinge due in part to its proximity--less than two hours from our home, it flat rolling land criss crossed with bicycle lanes and it plethora of breweries. We experienced all of this but what we discovered was really so much more.

We started off the weekend at a lovely bed and breakfast set amongst the fields of West Flanders. We didn't have any real plans upon our arrival but our hosts were quick to make suggestions which set our course for the weekend. First up was bike riding on the well maintained and dedicated bicycle lanes of the area. (Such things simply do not exist in our little part of Belgium). Our route took us through farm land filled with animals and crops and of course the hops stands which the area is famous for. Our ride was so peaceful with the only traffic being tractors and other cyclists. Living in a city it is all too easy to forget how rural parts of the country still are but there was no ignoring it during our ride. And as we quickly discovered, if you are a riding enthusiast, this little western corner of Belgium is the place to ride. Not only are paths well maintained but they are equally well marked with sign posts directing you at each intersection. And with this being Belgium, we were never too far from a local brewery or cafe. So close that we were able to have lunch at and then buy a few bottles of one of our favorite beers to take home. We also made a mid-afternoon pitstop at another cafe and enjoyed yet another local brew while Sidney romped around on the playground.

But I really want to return to the discussion of hops. I knew that a lot of hops is grown in the Poperinge region, after all there is more than one statue paying homage to the crop and the town is home to a hops festival where people actually dress up like the plant. Our bed and breakfast sat in a field that was filled with hops and pictures of our hosts harvesting hops adorned the walls. Even the windows of the local cathedral have hop themed stained glass. Yes, hops is serious business in Poperinge.

And this hoppy message was driven home when we visited the Hopsmuseum. This little museum, tucked off of the main street, walks visitors through the complete history of hops and hop farming in Belgium. For those not in the know, hops is a key component of beer, so it makes sense that it is a flourishing crop in a country that is renowned for its beer. In fact, 70% of the hops grown in Belgium is grown right in Poperinge. (It also grows throughout much of Europe as well as Asia and North America). One might even call it a weed since it grows at a rate of up to 10 centimeters a day. But to beer enthusiasts, it is the vital ingredient that makes beer, well, beer.

Using individual handheld guides, visitors to the Hopsmuseum explore four floors dedicated to the story of hops. There are the legends---according to some hops was first grown by Lucifer and is the weed of the devil. Then there are the facts---hops is the economic engine of the West Flanders region. Native Americans considered hops to be the cure for insomnia and persistent headaches. Hops thrives in areas with sandy soil and lots of rain which is one of the reasons it grows so well in this part of Belgium. Hops grow in both the male and female varieties but it is the female varieties that are welcome in the hops fields. Along the way there is the opportunity to smell various varieties of the plant, with each having their own distinct aroma. These are but just a few of the hops related facts I learned during our tour.

We visited the museum at the end of our weekend and it seemed fitting. After all, we had already cycled through the hops fields, taken in the hops related statues and sampled the end product of hops. Visiting the museum just completed the picture for us. A weekend in Poperinge made for the perfect respite from the temporary craziness of Mons. We enjoyed it so much that we are already making plans to go back. There are still more bicycle routes to peddle, beers to try and Belgian history to explore. I can't wait.