There is no reason to be the richest man in the cemetery;
You can't do any business from there.
~Colonel Harlan Sanders; American Astronomer~

The only real equality is in the cemetery
~ German Proverb~ 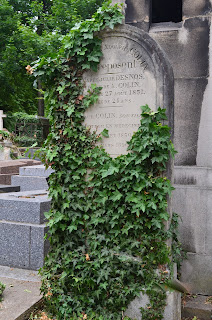 All cemeteries are not created equal. Yes, they all serve as a burying place for the dead and are mostly comprised of row after row of durable tombstones. Cemeteries are places that are as much for the living as they are for the dead. Here the friends and loved ones left behind can visit and feel closer to the departed. And in their own way, regardless of whether they are in the midst of a bustling city or in a rural field, they are tranquil and serene. But that is where the similarities really end. Cemeteries may be organized in a haphazard fashion or with military precision. They may be abandoned and overgrown or manicured with surgical precision. They may be humble with small nondescript stones or they may be filled with ornate and over the top spectacular crypts and monuments. Regardless of their state and organization, I've always felt that walking through a cemetery is like walking back in time through history. In a few brief words epithets paying tribute to the dead tell more about the dead than the wordiest obituary can. Mother, father, spouse, sister, brother, veteran, artist, explorer, its all laid out on the stones. They also provide a wonderful window into the history and values of their region. So yes, I've been known to walk through a cemetery or two on my travels and so a recent trip to Paris had me exploring the beautiful and historic Cimetiere de Montmarte.

Montmarte Cemetery is tucked inside an abandoned gypsum quarry in the heart of Paris' hilly 18th arrondissement just a short walk from the Sacre-Coeur. In the 18th century the site was first developed as a make shift and mass burying ground for the poor; it was an answer to the ban on the disposing of bodies in the center of the city.  The area was later acquired by the city of Paris and in 1825 it opened as a cemetery in its current form. Today it is the third largest internment ground in Paris. As it has since it was built in 1888, the cemetery sits under a busy metal bridge span yet it feels a world away from the hustle and bustle of Paris. The 11 hectare cemetery is filled with 20,000 burial plots as well as numerous leafy maple and chestnut trees which provide shade on sunny days and filter out the street noise from above. The Montmarte district of Paris was the center of the arts scene so it makes sense that the names of those interred here reads like a who's who of the Parisian arts and culture scene. Painter and sculptor  Edgar Degas, dramatist Alexandre Dumas of Camille fame, author Emile Zola and the actress Dalida are just a few of the thousands buried here.

If you are looking for specific graves, several mounted maps will help lead you to your destination. But for me, the real fun was simply wandering around. A visit to the cemetery finds you wandering through narrow tree lined lanes amongst the many ornate crypts paying homage to those buried there. The first thing one notices is the crypts. Crammed in side by side the unadorned rectangular one is the oddity. Rather, towering crypts resembling small chapels, complete with crosses, stained glass windows and ornate carvings are the norm. Rather than laid out in a sprawling pattern, the crypts are positioned in a manner that maximizes the small space. They line pathways wide enough for hearses to travel, are stacked several deep along narrow walkways and accessible only by foot. Taking advantage of the hilly location some crypts are erected on higher ground as though they are standing guard over the lower graves. Others are built into the wall surrounding the cemetery and yet others are tucked away in the few grassy expanses. (Well, expanse is all relative since we are in the middle of a city). Most of the "residents" have French names but there is a smattering of non-French sounding ones as well. Some of graves date back to the cemetery's earliest days while others have been recent additions--rather the actual names and dates of death are recent since most of the crypts themselves have been in place for years. And because this is the burial place of so many members of the arts community, there are busts, sculptures and other forms of art.

With sporadically places benches for rest and contemplation, Montmarte Cemetery makes for a welcome reprieve from the busy Paris streets surrounding the area. As a visitor to the city one's natural inclination might be to take in as many of the "big" sights as possible during their stay. But sometimes it is nice to step back from the hustle, leave the crowds behind and explore the city from a different perspective. If that is your goal, this is just the place to do it.

Oh, and the cemetery has a whole cadre of living residents as well. Cats, many of them, stalk through the graves simultaneously seeking refuge in the shady shadows and wallowing in the dappled sunshine. They aren't necessarily friendly but they will eye you suspiciously yet leave you alone if you leave them alone. So if you as though you are being watched during your visit, you probably are. By a cat, or two, or three.