The Floating Gardens Of Hortillonnages 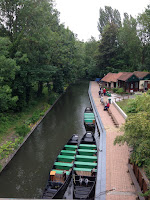 Sometimes I joke about finding myself my own little cottage to use as my own personal escape. (Ok, maybe I'm really not joking). You know what I'm talking about; a space that is all mine, serves a reprieve from my daily responsibilities and is all mine--nothing particularly fancy but something that is all girly without a Lego, army soldier or beer bottle in sight. I've taken to calling this fantasy spot a "she shed" or the female version of a man cave. They exists; (probably more on the Internet than in real life). I've seen prototypes and dreamed and then, while on a recent day trip with my travel group, I saw exactly what I've been dreaming about. And now I am really hooked. And while these little cottages weren't the main attraction of our destination, I found my little escape amongst the floating gardens of Hortilonnages in the northern French city of Amiens. Our destination was the gardens and canals themselves but while on board a small boat called a "barques a cornet" as we glided through just some of the 65 kilometers of narrow canals surrounding the 300 hectares of gardens, I saw the cottages I've been dreaming about.

The gardens themselves date back to the Middle Ages when these gardens were cultivated in the fertile grounds along the banks of the Somme River. While they host a smattering of flower beds and blooming trees, the gardens are gardens in the purest sense growing fruits and vegetables that for centuries provided the produce for Amiens. During the 15th century the gardens covered a total area of 1500 hectares and by the mid 1700s was home to a total of 47 distinct gardens. The area was a well defined community in its own right with a leadership hierarchy to enforce rules. Maintaining the gardens was hard and laborious. Adding to the labor intensive nature of farming the land, all of the necessary equipment, from tools to seeds, needed to be carried in by boat, thus storage sheds were built. Despite all of this, gardening plots were coveted and passed down from one generation to the next.

The gardening space has expanded and retracted over the years as the city of Amiens expanded and modern farming, transportation and refrigeration techniques changed the way farms operate. Today, although smaller than in previous decades, the gardens still produce three harvests a year. The recent trend towards organic produce has created a revival for the gardens and the formation of a new association that is working to preserve, maintain and continue the farming culture at Hortillonnages.

Today, visitors can tour the gardens both by boat and on foot. Touring by boat you see the gardens, which during our visit were in the infancy of their growing season. I can only imagine how lush they will be in a couple of months. But the towering trees provided a green canopy which made the entire area feel magical. Ducks and other water fowl swam alongside our boat and peeked out at us from the rushes and canal banks. You never knew what you would find around the next corner; sometimes it was more woods but other times it was garden plots carefully being tended by their caregivers or the small cottages. By foot, the experience is different. Winding paths parallel the canals but you can see the gardens at your own pace taking the time to sit and absorb the nature around you. The only hint that you are in a city is the spire of the Amiens cathedral on the horizon. If I had to use a single word to describe the experience, I would call it enchanting.

But my favorite part of course, were the little cottages set amongst the gardens and canal banks. Most cottages were pretty basic, rustic even, looking like one room shanties. The term 'shabby chic' immediately came to mind as a pastel pink house reminiscent of southern Florida sat next to a weathered wooden structure whose yard was filled with plastic bottle art. None appeared to have electricity yet most were obviously well cared for. With the exception of a couple that were accessible by foot bridge, boats were the only way of reaching them. As such, each had their own mooring spot. A few were incredibly well manicured and whimsical and these had me dreaming about the possibilities. We were told that today most of these cottages serve as weekend retreats for local residents.

I know that weekend retreats weren't the original intent of these buildings but I love what they have become. Each has their own individual personality, from manicured to overgrown, whimsical to utilitarian, I could dream about the possibilities of each of them. It made me realize that  don't need a big beach house or mountain retreat; give me a one room house in a peaceful setting and I could be perfectly content. For the moment I am making myself content with my own little quiet corner in our house but with our next move I'm already planning what my she-shed will be like and these cottages in the Hortillonnages gardens are sure to be my inspiration.