Yesterday we participated in an event I've been looking forward to for over a year.  It wasn't a national holiday or even a significant celebration. Rather, we joined some Albanian friends for a day of pressing olive oil.  We had been invited to partake in this late fall Albanian tradition last year but we couldn't make our schedules work to accommodate the pressing.  This year, we arranged our schedules around this event.

I had toured an olive oil factory during their off season so I was familiar with the machines and the process but I still wasn't sure what to expect.  The factory itself was nondescript.  We had actually driven past it before without noticing that it was even there.  Only a small sign nailed to a post at the top of the driveway gave any indication to the sweet oil that was produced at the bottom of the hill.  The first thing I noticed upon entering the factory was that it was very loud.  The sounds emanating from the machinery were deafening so I was pleased to see that the actual workers in the factory were wearing ear protection.  (The same can't be said for the handful of old men who were sitting around a table in the pressing room drinking raki).  Factory is almost a generous term for the building.  In reality it was an immaculate concrete structure with the ubiquitous bar/cafe attached to it.

The process itself hasn't changed much over the centuries but the equipment involved certainly has.  What used to be done completely by hand is now done with electricity driven machinery.  I can only imagine how much time it took to press olive oil the old fashioned way!  Burlap bags of freshly harvested olives were lined up along the walls of the pressing room.  I immediately noticed that some of the olives were green while others were purplish-black. It turns out that both kinds can be used and interchangeably at that.  The darker fruit are actually the ripe olives while the green ones are the unripe ones.  It makes sense.

The first step is for the olives to be sorted to remove any leaves and twigs that are mixed in with the olives.  The process brought me back to my Maine roots reminding of the way wild blueberries are sorted before being turned into blueberry delights.  The bags of olives are dumped into a large hopper that is set into the ground; they are then vacuumed up into the industrial sized sorting machine.

After the olives are sorted, they are ready for a hot bath. 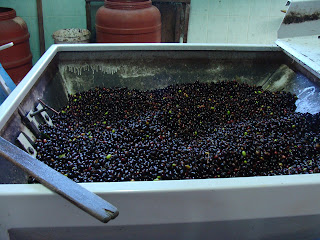 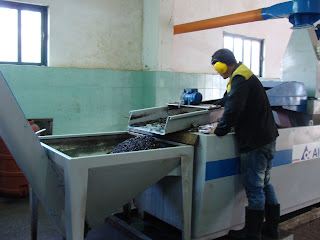 Post bath, the olives then move into the actual pressing chamber.  Here they are ground and mashed into a puree to remove all of the tasty oils.

Next, the extracted oil is filtered and pumped through a series of pipes and vats until it emerges as a beautiful green liquid.  This oil has a bright olive flavor (the same can't be said for many oils) that to my inexperienced palate tasted ready to use.  We were told that we need to let the oil sit in open containers for 24 hours to allow it to breathe.  After that, the oil should be stored in glass bottles in a dark space in order to keep its flavors pure. 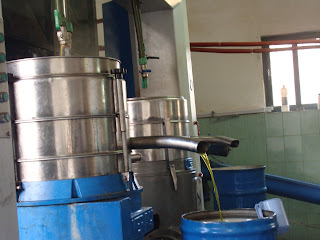 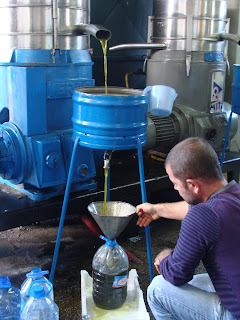 What I found the most facinating about the entire process is what happens to the olive remnants after the oils are removed.  The mashed pulp and pits are transferred into a drying room where they are allowed to dry until they resemble dry saw dust.  They are then stored until next year's olive oil pressing when they are used as the fuel that heats the olive bath water.  How cool is that?


We came home with 20 liters of fresh olive oil.  That is a lot of oil for us but for most Albanians, who cook only with with olive oil, it represents a fraction of what is needed to get through a year.  We also brought home 3 kilograms of cured olives. Considering I'm the only one in the Brown house who eats olives, that is a lot of late night snacking for one person.  I declined the offer for fresh, uncured olives though since I cured a batch of my own this past fall.  You can read about that experience here.