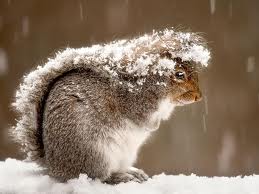 When did the weather become breaking news?  I'm not talking about anticipated mega storms along the lines of Hurricanes Katrina and Sandy, or the EF5 tornado that destroyed Joplin, Missouri in 2011.  I'm thinking more about events I would consider normal seasonal weather.  For example, let's talk about snow.  While a snowstorm would be considered unusual in Florida, the same storm in the Midwest or New England in February is normal.  It is winter after all and snow is to be expected.  So why does all this winter weather seem to be making national headlines recently?

Perhaps the Weather Channel is to blame for the weather related feeding frenzy.  After all, with an entire television channel devoted to the coverage of world weather twenty-four hours a day, there is obviously an audience for such reporting.  But I can understand the weather channel reporting on impending storms and weather related events.  In the end, that is their line of business.  What I find the most curious, however, is mainstream media channels, from CNN and FOX to CBS and NBC buying into the weather hype.  Are there really so few more pressing news stories that these networks can afford to dispatch their reporters to stand in a Home Deport parking lot for hours and wait for the storm that may or may not ever materialize? Is it just me or does every approaching storm get tagged with an cute moniker than the previous ones?  How many "Storms of the Century" have been reported on? I would guess that in this century alone we are probably up to 13.  There is no denying that Americans love media hype so that might explain this January's Nemo or the Snow-a-geddon of past Octobers.  I guess  that repeatedly talking about a fancily named storm is more likely to draw in viewers than a brief news clip on yet another snow event.  But to me, all of this is just so strange.

But now I return to my original question.  Why is snow of a measurable yet not recording breaking amount in the middle of the winter a national media event?  Perhaps our obsession with the weather stems in part from our heavily scheduled lives.  As a culture we seem to believe that we can control just about everything but the harnessing of Mother Nature continues to be one of the few things that eludes us.  Are we obsessed with the weather because we can't control it?  Turning on the news recently I heard that an airport in Minnesota had been briefly closed because of snow.  This closure had inconvenienced travelers and disrupted travel across parts of the Mid West.  Um, this is February in Minneapolis so why should we expect anything other than snow?  Shouldn't a state that far north be prepared for the arrival of snow?  Didn't anyone else read Little House on the Prairie as a child?  Snowstorms happen in the winter.  Yes the storms can temporarily inconvenience us but we recover and move on.  Regardless of the size of the storm and contrary to media reports, it is not Armageddon and we do recover.

But all this talk of snow now has me wanting a snow day.
Posted by Zosia at 11:45