Riding the Rails in Budapest 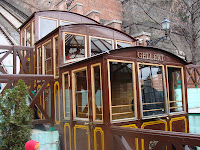 We spent the past weekend in Budapest, Hungary. It was my second trip there but the first for Glenn and Sidney so we spent most of our time re(exploring) the City's great sights.  Thanks to Budapest's great public transportation system --in the form of a funicular, trams, trains, the underground subway, and a cog rail, we covered a lot of territory in a very short time.  We were whisked to the top of the Castle District on the Budavari Siklo, a three carriage funicular that was unlike any other I've ever ridden.  I had ridden the Budapest underground during my  previous visit.  Despite one schedule change that was only transmitted in Hungarian and resulted in my ending up in a part of the city I had not anticipated visiting, I loved their subway system.  It was immaculately clean and efficient (even the high speed escalators that whisks passengers deep into the bowels of the city moved quickly).  Most charming of all, the actual subway cars resembled something from decades ago yet were better maintained and more attractive than the new ones that grace most of America's public transportation systems.  I have to admit that on my most recent visit, I was saddened to not be able to ride any of these old fashioned cars.  Rather, it looked like we were riding in brand new subway cars that were just as efficient and well maintained.  Coming from a land with no safe public transportation, the last thing I should have been doing was complaining about it being too new!
﻿
﻿ At the suggestion of my friend Pam, and with step-by-step transfer directions provided by the concierge at our hotel, we spent Sunday riding the rails up into the Buda Hills.  With no particular end destination in mind, we took a total of four trains--the subway (via very new subway cars), a tram, a cog rail train, then finally an antique train pulled by a steam engine-- as we left the rain of the city behind us and exchanged it for rolling hills and falling snow.  This final train was the Gyermekvasut, or Children's Railroad. A relic from the Communist Era, this small railroad, under the supervision of adults, is operated by children ages 10 to 14 who do everything from selling the tickets, serving as on board conductors, and guiding the trains into the stations.  The only thing they don't actually do themselves is serve as the train engineers (and I bet that is the best job).

The Gyermekvasut got its start as a program of the Youth Pioneers in the 1940s and from the crisp salutes as the trains enter the stations to the sharp uniforms that are smaller versions of those worn by Hungarian State Railway employees, the railway's Communist roots are evident.  The Gyermekvasut was modeled after similar versions operating in the Soviet Union and Yugoslavia with high achieving students from Budapest schools being selected for these coveted positions.  What started with a few kilometers of track eventually and work camp like youth employment conditions has expanded to its present 11.2 kilometers of narrow gauge rails and children lining up to participate in what I think is the coolest hands on work experience a child could get.

We spent a couple of hours on the train chugging through the Budapest woods.  Because it was the weekend the train was filled with other families escaping, yet experiencing the wet snow.  As the train pulled into each station it was met by at least two saluting youth and upon departure our tickets were checked and announcements were made by the child workers on board.  The service was efficient and impressive.  This simple train ride was one of the coolest ways I have played tourist in a long time.
﻿ ﻿