The Size Of Your Footprint 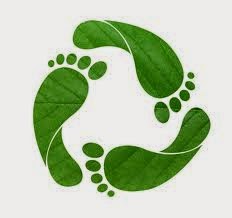 After three years away, we're back in the U.S. of A. for a month. And the first thing I've noticed has been how big everything is. From the highways and the cars that speed down them to hotels and hotel rooms and even the people themselves, everything is simply so much bigger than it is in Europe. One could argue that it is because there is so much more space in America. But it all makes me wonder; is bigger really better? And more important, is it really necessary?

In our jet lagged haze, when we went to up our mid sized car at the airport, the saleswoman up-sized us to a much larger vehicle. (In my defense I had taken Sidney to the restroom and missed this transaction). When I saw the vehicle, I was immediately taken aback at how big it was. It was huge compared to the majority of cars we see on Europe's roads and would have a hard time driving down many of the narrow streets that we have grown accustomed to. It would never have fit into our parking garage back in Belgium. Yet sadly we aren't nearly the largest car on the Interstate being dwarfed not only by tractor trailers (that we are used to because in Europe they are the same size) but by even larger family sized mini vans and SUVs that could easily haul small armies. Back in Belgium, the only people driving vehicles this large are other Americans (and there are usually large scratches running the length of these vehicles since their size just isn't conducive to European roadways). European family cars are more practical sedans or compact station wagons that seem to work just fine. One could argue that the cost of fuel is a driving factor. With the cost of one gallon of unleaded gas hovering around $3.70 in the Washington D.C. area, the cost is three times as much in Belgium so it would make sense that Belgians drive smaller cars. But what about Americans in Belgium, and other parts of Europe? Are we simply willing to shell out a lot of money for fuel in exchange for driving that big car? I've heard people say that they must have all of the space so they are comfortable and have enough space to be in the car without touching one another. Maybe because I only have one child I don't get it but I remember road trips as a child where we were all squished into a vehicle and we did just fine. I guess times have simply changed.

But it isn't just American cars, it is everything. Houses are huge, filling sprawling suburbs with McMansions that could house entire extended families but are intended so a couple and their children. Not only does every household member require their own sleeping quarters but they must also have their own recreational space as well. Hotel rooms here are so much larger than their foreign counterparts with the bathrooms alone being the size of many hotel rooms. Do we really require that much space when we travel? And don't even get me started on the portions of food that are served in restaurants. From super-sized drinks and fries in fast food restaurants to overflowing platters in more formal dining establishments, the amount of food being served is simply overwhelming (and likely contributes to the size of Americans). Grocery stores are sprawling filled with what I now find to be overwhelming choices. Is a choice of thirty different soaps really required? Or a freezer case that spans several aisles? I guess if you are all about convenience foods you do need that much space. But pre-packaged foods produce more consumer waste. In European communities where you pay more for each bag of non-recyclable trash you put on the curb, it is practically a badge of honor to put as little as possible in front of your house on trash day. American houses are easy to spot because of their mounds of trash sitting on the curb.

Yes, everything is feeling just so big to me and I'm finding myself wanting less space, smaller meals and a more compact environment.

But is America and the American lifestyle simply bigger because it can be? Maybe it can be at the moment but is this over the top excess sustainable over the long haul? And again I ask whether it is even necessary?
Posted by Zosia at 11:37