Thank You For NOT Smoking 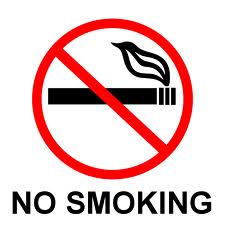 Albania is a country of smokers.  With approximately 40% of the population admitting to smoking, Turkey is the only other European country with a higher percentage of tobacco addicts.   Despite the government passing a  2007 ban on smoking in public places, Albanians continue to smoke everywhere.  Whether it be in restaurants and cafes, on buses, or in shopping malls, the sight of lit cigarettes in public is all too common.

The Government of Albania loves to pass laws.  These laws, however, are rarely if ever, enforced which begs the question of why have laws if there is no intention of enforcing them.  Perhaps it is because on paper, it looks good to the rest of the developed world to have laws on the books. It sounds logical. Since public smoking bans exist throughout much of Europe, it would make sense that a country (Albania), who is so eager to be accepted by her Western and Central European counterparts, would attempt to emulate their approach to smoking.  But the key difference is that in the rest of Europe, the smoking ban is enforced.  In Albania, it clearly is not.  When I was in language class prior to arriving in Albania, I remember my tutor telling me that despite the ban, smoking in public was prevalent.  In my American naivety, I recall questioning how, if it was a law, that the ban could not be uniformly enforced.  I just couldn't wrap my mind around the blatant disregard of the law I was hearing about.  And then my plane landed in Albania for the first time.

I was pleasantly surprised to see no smoking signs adorning the doors of restaurants and other public establishments.  I was quickly disgusted, however, when I realized that the signs were mere wall decorations (or, if they were in the form of table tents, vessels for collecting discarded ashes).  During our first week here I remember walking through the courtyard of a local shopping mall and seeing three young men lounging directly under a no smoking sign with cigarettes lit.  One of the offenders was dressed in the uniform of the mall's security guards.  I began to wonder who would enforce the laws if those who had the enforcement powers were offenders themselves.  Over the next few weeks and months I realized that despite their non-smoking signs, restaurants kept a ready supply of ash trays handy.  More often than not, the ash trays were a regular part of table settings.  Just as often, we will remove the ash tray from our table upon sitting down only to have it be quickly replaced by an eager to serve waiter (perhaps the only time waiters in Albania move quickly and are eager to please).  Attempts to ask waiters to tell other diners to extinguish their cigarettes are met with blank stares or shrugs and on more than one occasion I have seen the restaurant staff themselves smoking.  In most establishments, the waiters will at least put their cigarettes down before waiting on us but even at a nicer dinner out last night, the host/manager/extra waiter hovered by our table all night with a cigarette dangling from his yellowed fingertips.  Can you say eeeewwwww?

Just about every shopping mall or larger department store contains at least one cafe.  I have noticed that most of these places have their requisite no smoking sign posted and go as far as not providing ash trays for their patrons. That does not stop the smokers though; used coffee cups, saucers, or even newspapers (yes newspapers!) can serve as an ash tray in a flash.  For my Washington D.C. area friends, can you imagine patrons smoking in the food court of the Pentagon City Mall or in the lobby of a Smithsonian Museum?  And yes, I've heard more than one Lufthansa flight attendant reprimand a potential smoker on an airplane.  The sight of a man peddling a bicycle while puffing a cigarette is a regular occurrence as is police standing around in huddles with plumes of smoke overhead.  This is all a part of the smoky reality here in Albania while people wonder while asthma and air pollution are so prevalent.

So how do I cope?  Sadly, a smoker or two inside of a restaurant no longer makes me shudder.  I will try to avoid sitting near them but that doesn't guarantee that the next patron to enter won't light up at the abutting table.  Ironically, sitting at outdoor tables tends to be even smokier than dining inside so the decision to make is whether fresh or stale cigarette offends me more.  I still cringe at the sight of plumes of smoke filling a store or shopping mall hallway and I hold my breath and move extra fast when I walk through the designated smoking area at the Embassy (which for some reason, while outside, is adjacent to the building's main doorway).  I relish dining in the handful of restaurants here in Tirana where smoke free dining is assured (and make a point to patronize these establishments as a way of showing my support for their willingness to enforce the national law) but I wish that the rest of Albania could figure out how to stub out the butts.   I suppose this is asking a lot however, since with the large number of unenforced laws on the books, it is unlikely that enforcing the smoking ban is a top priority for anybody.  So I beg of Albanians across the country on a personal level that they please don't smoke.  Or at least don't smoke in public.  Don't do it for me but do it for yourselves, your friends and family, your country and your children.  Please??  We'd all be better off if it could be done.